Everyone played a role. 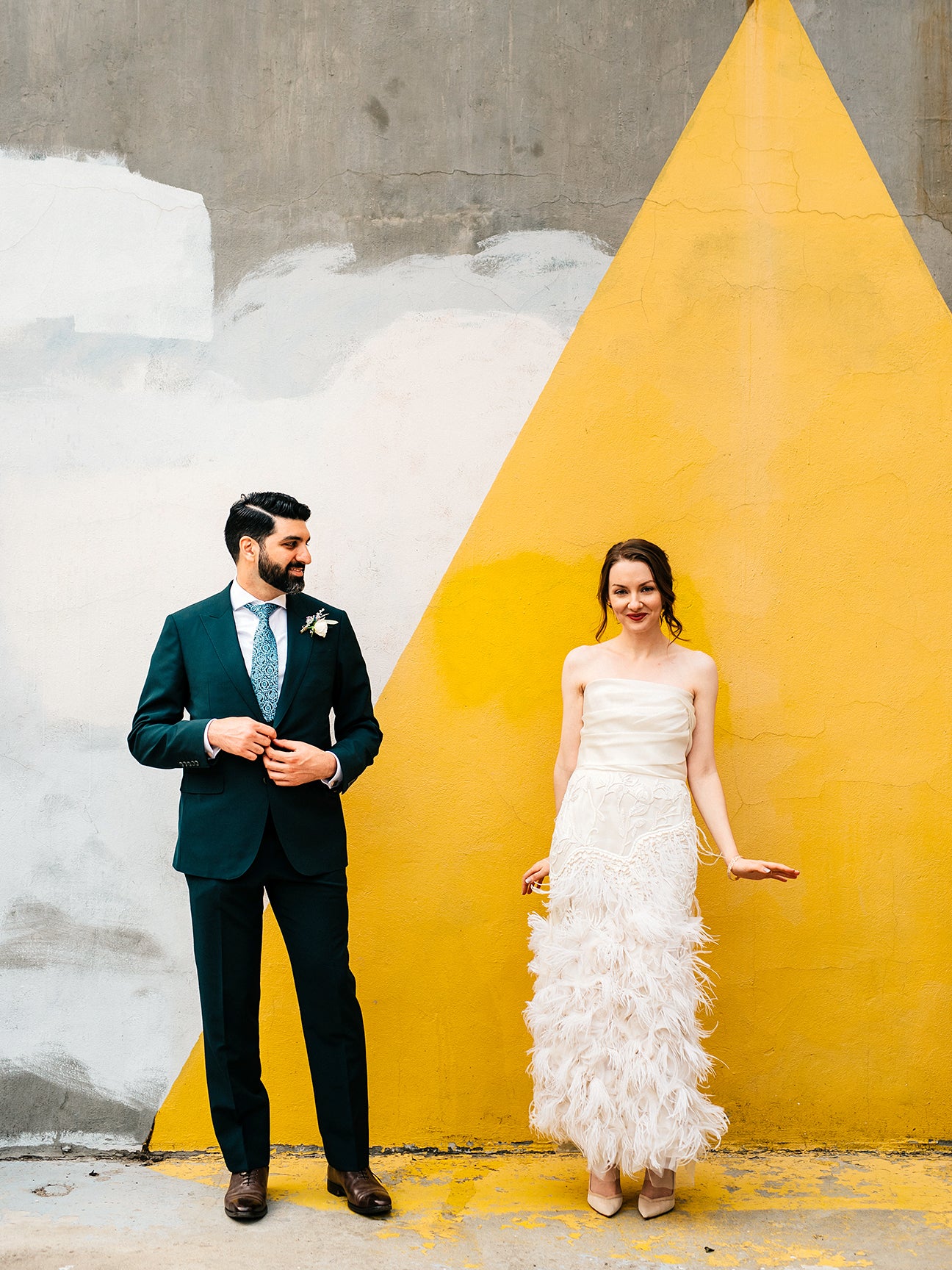 The guests at your wedding are there to celebrate two people: you and your significant other. Most couples not-so-subtly remind everyone of this by plastering their names on signage, party favors, and even cocktail napkins. Elena Mahno and Asher Zafar took a different approach. The now-Brooklyn-based duo wed last summer in their hometown of Toronto—and there was no monogramming involved.

“We decided to forgo many of the cultural expectations and re-create an evening with every detail being unique to us,” says Elena. Instead of a sit-down dinner, the couple had plates of food floating around the venue, Berkeley Fieldhouse, all night long. They said their vows under a giant chandelier of wisteria made out of paper, rather than a flower-laden arch. Their backgrounds (Elena is Eastern European; Asher is second-generation South Asian) played a big role in the vibrant, interactive installations, which they called on artist friends to create. The whole event—from the “I do’s” to the dessert—was undeniably them. Here’s how they put their subtle stamp on things.

Designate a Room Inspired by Your Everyday Life

Tea was an important part of both Elena’s and Asher’s upbringings, but it has a major presence in their adulthood for different reasons: Elena has a bad habit of forgetting full cups around the house, and Asher is the one constantly picking them up. “He says I don’t like tea—I like the idea of tea,” says Elena, laughing. To honor this endearing ritual, they decided to turn a tree house on the property into a tearoom where guests could drink two different types of chai and explore the wooden spoons, Soviet-era cups, and saris they brought from home.

Everyone expects to see miniature versions of you and your spouse on the top tier. Colorful little dinosaurs, on the other hand? Elena peppered the spray-painted creatures over all the desserts and throughout the space as a low-key homage to Asher’s love for the Toronto Raptors; the team was in the NBA playoffs during the wedding.

Get Everyone on Board

The entire day was a group effort. Asher’s father recited a sehra (Urdu poem) during the ceremony, while a paper-artist friend designed and installed laser-cut panels inspired by images of the couple’s favorite places from around the world.

Another pal lent them his Alfa Romeo Spider for the day, and when the car stalled on their way to the venue, a stranger rolled up his sleeves and pushed them out of traffic to safety.

advertisement
“Dig deeper and you’ll learn more about who you are as a couple.”

Instead, guests left letters and gift cards in a birdcage marked by embroidered hoops, which Elena used as signage throughout the space; the pair stretched patterns that were special to both of their cultures, such as paisley, across the rings. It’s easy to buy decor that’s already available on the market, but following your own path (even if your families don’t understand the vision at first) pays off. “Dig deeper and you’ll learn more about who you are as a couple,” says Elena. “It will manifest in a very authentic way. We don’t get to do that often in our lives.”

See more stories like this:  This Wedding Married India, Pakistan, and Italy in One Floral Fantasia We Bought Our Wedding Flowers at 5 a.m. on the Morning of the Ceremony Gothic Florals and a Tattoo Station: This Couple Planned a Wedding on Their Own Terms