Gothic Florals and a Tattoo Station: This Couple Planned a Wedding on Their Own Terms

Using many, many mood boards. 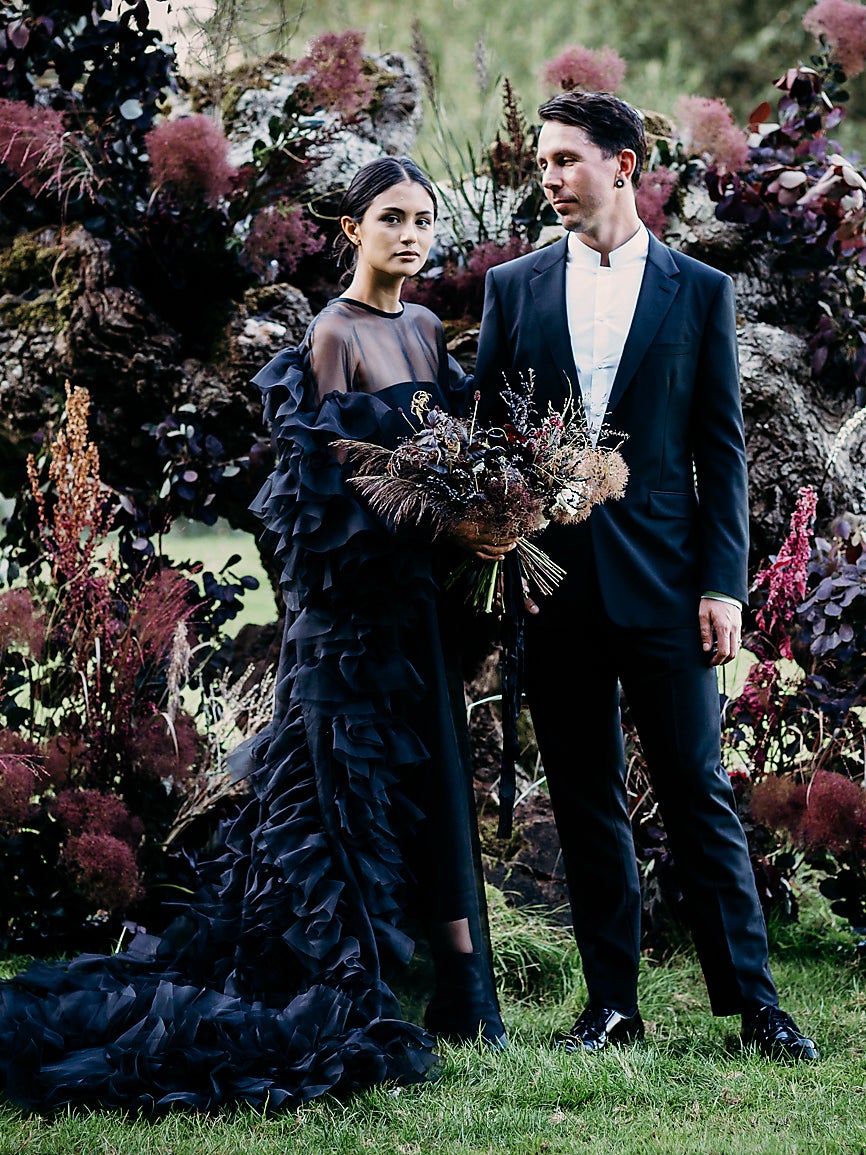 Photography by Victoria Somerset How

When you imagine the wedding of a couple who met on MySpace in the heyday of scene kid style, you might not expect a ceremony that looks like a Maison Margiela editorial set against a gothic floral installation. Back in the early aughts, Lydia Pang and Roo Williams were just two Welsh teenagers who connected on the website and eventually met at an emo club in South Wales. Now, 13 years later, Lydia is the design director of Nike’s editorial team and Roo is an accomplished creative technologist who has worked with Twitter, Converse, and Nike—and they haven’t strayed from each other since the day that fateful friend request was sent.

From Wales, they moved together to London, stayed there for nearly a decade, lived in New York for three years, and now have settled in Portland, Oregon. Lydia and Roo never thought they’d get married, but once they hit 30, they decided to celebrate their strong bond. When the pair tied the knot this past August, they chose to nod to their emo roots: What better way to do so than with a black wedding dress, a jazz band playing emo covers, and a fallen tree for an altar? Here, Lydia shares how they planned a day perfectly tailored for their unique love story.

Don’t Let Tradition Hold You Back

Lydia and Roo’s bucking of tradition went beyond just aesthetics. They chose to forgo the typical first dance, cake cutting, and groom’s speech in favor of a more bespoke celebration. The most inventive part of their wedding? A tattoo station with flash sheets designed by the couple.

DIY Without Making It Difficult

All those mood boards helped her to communicate her vision to her vendors, guaranteeing the perfect final result. “I basically made the most robust creative brief you’ve ever seen and distributed it to the world,” she says. After all, communication is key to bringing any project to life—especially an epic wedding celebration.

Bring It Back Home

The field in the Welsh countryside where Lydia and Roo held their wedding wasn’t just chosen for its stunning natural beauty—when they were first dating, they passed the plot of land every time they drove to visit each other. Many of their guests hadn’t previously been to Wales, so the couple worked to ensure the celebration was properly grounded in their roots.

“I wanted to make sure that if I was returning home to Wales, I wasn’t just going to show up and have a bougie New York wedding. I wanted to show up and actually engage the community,” Lydia says. “The catering company we used is a local business run by a really sweet couple.”

For Lydia and Roo, choosing vendors wasn’t only about creating the most beautiful day; it was also about who they were investing in. “I think if you have money to spend on a wedding, you should use it to fuel the female economy,” Lydia says. “I just felt a responsibility.” Vervain Flowers, Victoria Somerset-How Photography, and Roberts Wood are among the many superb women-owned businesses the pair supported through their wedding.

With the big day behind them and plenty more memories to be made in the future, Lydia and Roo make for one enchanting, dark fairy-tale couple, till death do them part.