Plan a Greenhouse Wedding in 7 Weeks? No Problem

“Honestly, we could have done it in five,” says the bride. 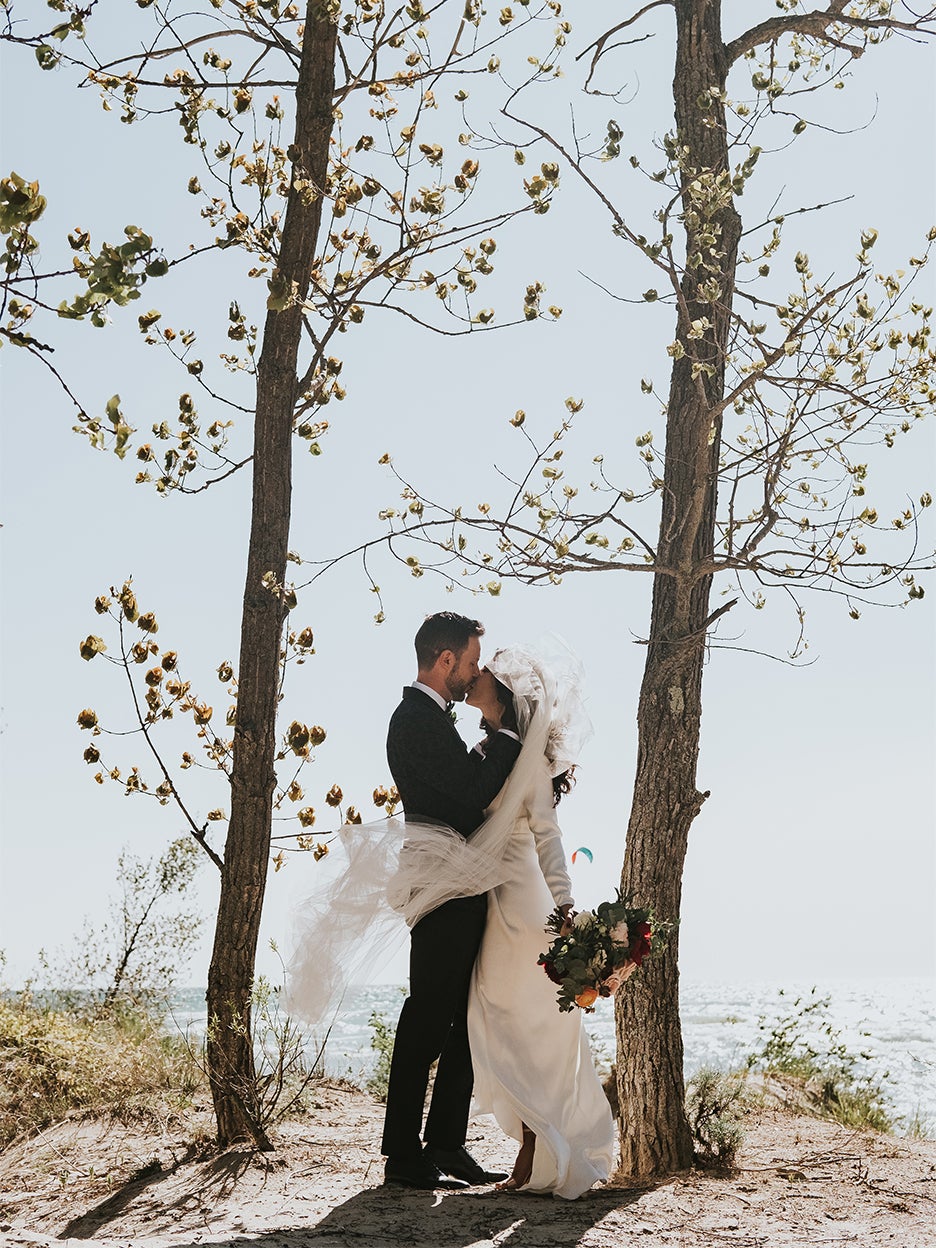 Yanick Lolande already had the diamond picked out, and he and Christine Ziade knew they wanted to get married in a year or so. It’s just that Christine’s brother, who lives across the country and rarely visits, was coming to the Toronto area with his family in the next seven weeks, and the Canadian couple didn’t want to wait another year to tie the knot.

So without a formal engagement, Christine and Yanick sent wedding invitations via email to family and friends, then went to work planning an intimate outdoor ceremony for just 24, the max capacity of their greenhouse venue. They asked friends to pitch in on photography and food, and for her dress, Christine ordered a $240 long-sleeve white gown from Asos that “wasn’t too intricate” so she could have it tailored to fit.

Oh, and about that proposal? Just one week before the big day, Yanick presented Christine with a ring to make it official. Then on June 2, 2019, the no-drama pair stood in a circle of their loved ones against the property’s lush forest to exchange vows. At dinner, the two took the mic to give their own toast and thank yous to their family and friends. And while they admit that trimming their guest list was difficult, keeping it small was ultimately worth it. “Everybody felt really in it, and no one was a random guest in the corner of a room somewhere, getting lost in the mix,” says Christine. “By the next day, everyone was like, ‘I can’t wait for a wedding reunion!’”

Here’s how they pulled off their wedding in just seven weeks—though Christine boasts that “honestly, we could have done it in five.”

Before the pair signed off on tying the knot at Compass Rose Suites in Prince Edward County, they made sure that the date worked for their photographers, who are their friends. Similarly, Yanick asked a chef friend from Gather Niagara to plan the menu, which consisted of grilled tiger shrimp, ricotta tortellini, rainbow trout, duck confit, and mushroom risotto. “We were actually his first catering client,” says Yanick. “And we received rave reviews from everyone!”

Think Small to Get Your Dream Venue

The pair could have never afforded their location if they’d had a large wedding. But the small greenhouse on the property was just the right size for the type of party they envisioned. They got married on a Sunday (typically less busy than Saturday), which also helped them avoid making the day’s tally more than $14,000. “We didn’t want to spend a ton of money, but we also didn’t want it to look like we didn’t spend a lot of money,” says Christine. Choosing a striking venue—like one where the panes of glass allowed nature to be visible at all angles—helped with that. Just a few vintage candlesticks, subtle rose and ranunculus arrangements, and some twinkly lights set the scene at dinner.

Evaluate Your Connection—WiFi Connection, That Is

Exchanging vows in the middle of bucolic field can sound so romantic—until you realize you need the Internet to play your processional song over speakers. “That’s why we got married in front of the forest,” says Yanick. “It was pretty but also close to a building with WiFi.” Then they spruced up their final location with a rug they brought on which to stand.

Paying someone to record your big day can seem like an unnecessary expense—especially as the contracts and invoices start to pile up—but Christine and Yanick say it’s the one aspect they would have done differently. “The only two things that you look back on are photos and videos,” says Christine. “The rest are all memories.”