A First Dance–Free Thursday Wedding Planned on a $10K Budget

“Don’t do anything for tradition’s sake.” 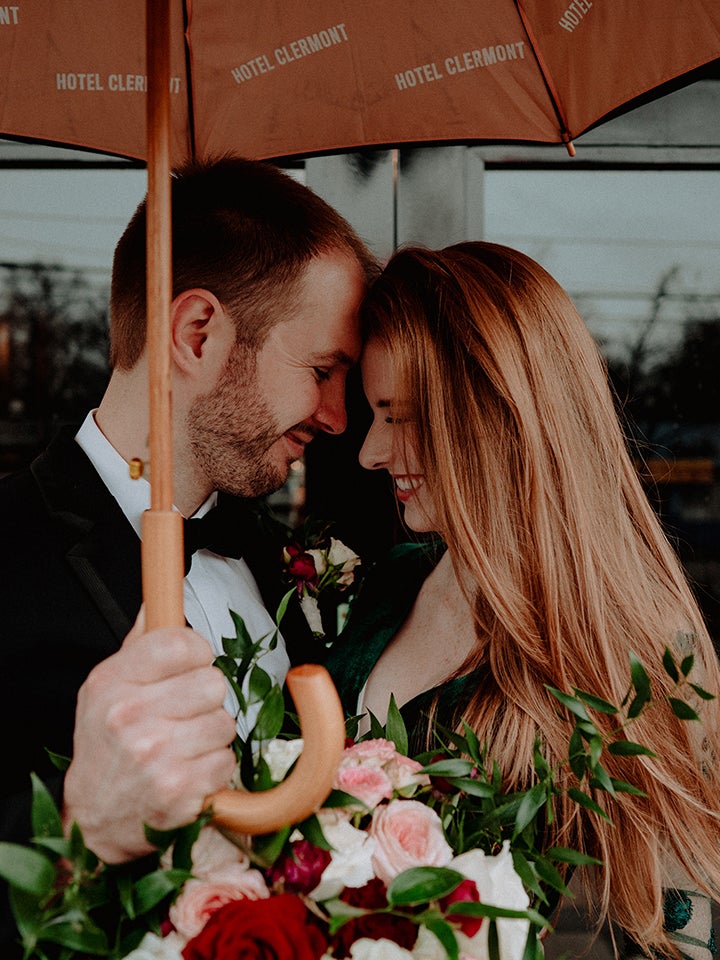 Sarah and Evan Proctor’s first date was like something out of a romantic comedy. The pair first met in anatomy class in college, but it wasn’t until years later, after reconnecting on social media, that they found themselves at a restaurant in Georgia on a summer day. “Evan brought along a puppy that wasn’t even his,” recalls Sarah. After dinner, the pair took the adorable French bulldog (which belonged to Evan’s brother) on a walk through a nearby park, where they spotted a fountain and climbed in. “It was hot and we were a little tipsy,” says Evan, laughing.

Fast-forward six years to this past November, when Evan proposed to Sarah on a quaint covered bridge while hunting geocaches. The couple originally had an October 2020 date in mind for an intimate wedding in the Catskills, but all that changed when the groom’s father was diagnosed with pancreatic cancer. “There’s just a lot of uncertainty around that,” he says. “We really wanted him to be there and to be involved.” So they pushed everything up to February and hosted a 15-person celebration in their hometown of Atlanta for $10,000. Despite the stormy forecast and flash flood warnings on the big day, the couple never lost sight of the bright side: “We got some epic, moody photos out of it,” says Evan. Here, the newlyweds look back on how they turned around a stress-free wedding in a short three months.

Be Open to a Thursday

Knowing that the February weather would most likely not be in their favor, the couple opted for an indoor ceremony at the historic Dekalb Courthouse. The only problem was that every Friday and Saturday for the rest of the year was booked.

“Eventually, I was like, you know what, it’s going to be a small wedding anyway, why not Thursday,” recalls Sarah. They were able to get both of the venues they wanted (the reception was held at a nearby restaurant, Kimball House) and it cost about a quarter of the price of a weekend date.

Sarah had originally planned to pick up flowers for the altar and her bouquet from Trader Joe’s the day before the wedding. But the closer they got to the date, the crafty plan seemed less doable. “As stress-free as that sounds, there’s a lot of logistics involved,” she says (like getting the blooms to the hotel without a car and storing them in a cold place overnight). In an effort to avoid shuffling around, she hired A Peachy Keen Wedding to handle the arrangements. Asking family for help also turned out to be a win—the bride’s sister baked the red velvet cake for the reception.

“I was still able to get creative in other ways, like hunting down a green velvet dress for $135 on Etsy,” says Sarah. The pair also wrote their own vows and customized the script for the officiant so the ceremony felt personal, not outdated.

Sarah and Evan saved on little things (the groom’s bow tie, the vow books, the cake topper, the rings), all of which were sourced from Etsy, and dedicated more than half of their budget to photography. “If you’re going to spend your money on just one thing, it should be the pictures. That’s what you’re going to have for the rest of your life,” says Sarah. Their photographer, Danny Bergin, brought along a Polaroid camera, which he handed off to some of the guests during the reception. The casual snapshots are now prominently displayed on the couple’s living room coffee table in a shadow box.

Pick and Choose the Traditions That Are Meaningful

“Don’t do anything traditional for tradition’s sake” was the pair’s motto for the big day. They kicked things off at Hotel Clermont, where they had their “first look” and broke open a nice bottle of whiskey they’d been saving since Christmas. “Sarah introduced me to bourbon. Since we met I’ve been hooked,” says Evan. Then when they arrived at the courthouse, they walked each other down the aisle. “I love my dad, but to me, this moment was about us coming together as a couple,” says Sarah.

There was also no first dance that evening. “Honestly, we completely forgot,” says Sarah, noting that they got caught up talking and mingling with guests. However, they did have a song prepared just in case. “It was going to be ‘Bye Bye, Li’l Sebastian’ from the TV show Parks and Recreation,” she recalls. “We try not to take ourselves too seriously.”