Guests jumped into a pool of sprinkles at the end.

By
Alyssa Shelasky
Event Planning by
Be Hitched 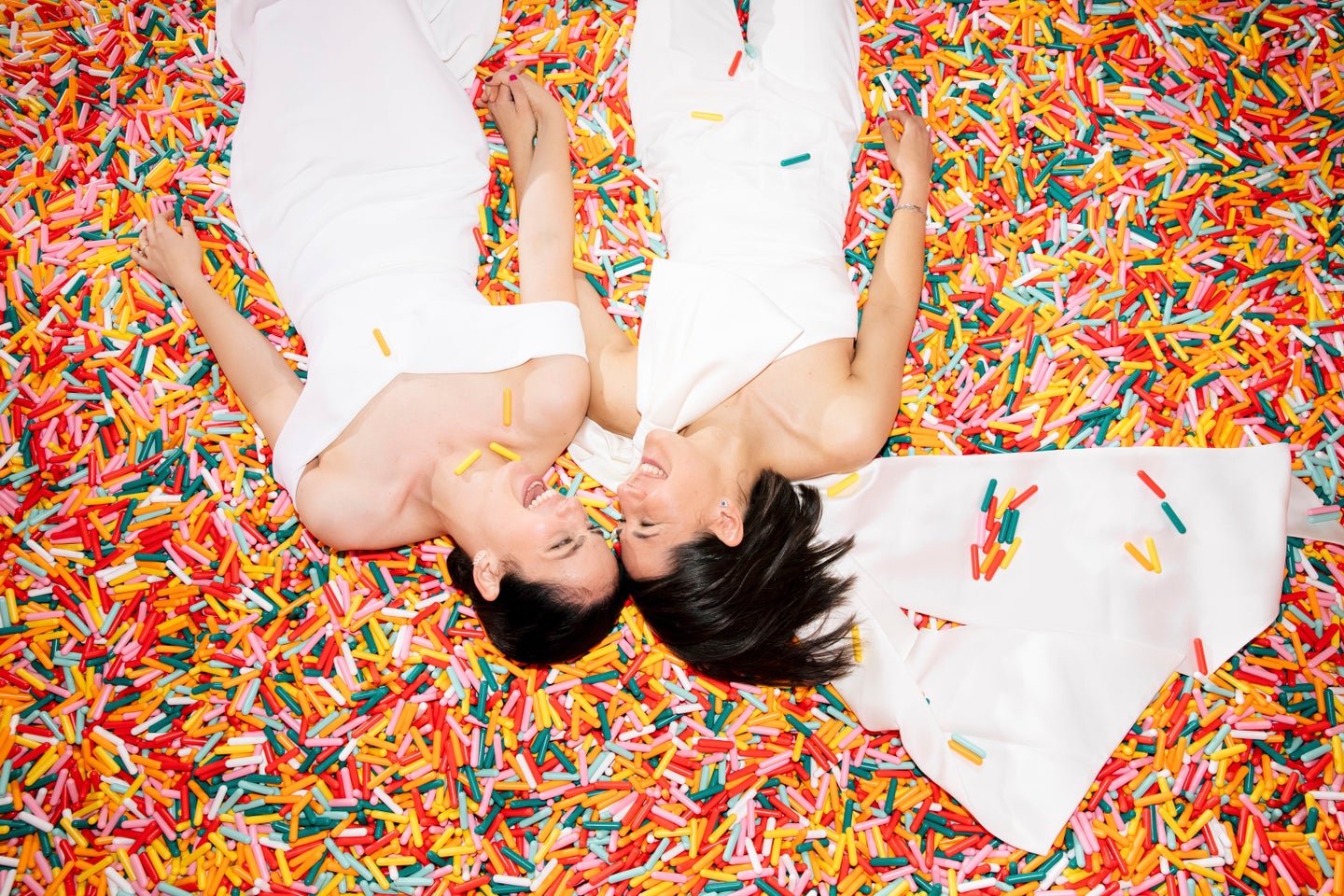 This story originally appeared in the Weddings issue of Domino. Subscribe to be the first to receive each issue.

The Museum of Ice Cream was the obvious wedding choice for Catherine Meyer, a first-grade teacher, and Sydney Meckler, a pediatric nurse practitioner—two raging sweet-tooths whose relationship has been celebrated with dessert hunting and candy consumption, and who got engaged over DIY sundaes on their Oakland, California, deck. They just didn’t know it right away.

Their wedding was supposed to take place at Dawn Ranch in Guerneville, California, but three months before the date, the brides were told the event couldn’t happen due to extreme flood damage. Did they freak out? Not really! “We felt bad for the ranch, disappointed for us, and then we just had to laugh,” recalls Sydney. “We both work with kids who have experienced trauma,” says Catherine. “So when you see people going through really hard times every day, it puts things in perspective. This was not the worst that could happen to a person.”

Photography by Jenn Emerling; Event Planning by Be Hitched.

Still, with weeks to go and 200 people on the guest list, the couple scrambled. They landed on the San Francisco Film Centre for the ceremony and dinner, and then they dreamed up the cherry on top: a reception at the Museum of Ice Cream, a VIP venue that typically only a celebrity could score. How did they make it happen? They enlisted two sets of extremely determined parents, particularly Sydney’s mother, who wrote the museum a heartfelt letter insisting that this was the perfect first wedding for the museum—an LGBTQ+ affair during Pride month in San Francisco. The museum enthusiastically agreed, and both brides felt like Beyoncé.

In the end, a wedding-planning story that could have been remembered as a catastrophe was reframed June 14, 2019, as the sweetest, most delicious night of their lives. “Everyone, everywhere, was smiling,” remembers Sydney. Adds Catherine, “One of our gay friends said she never felt so free to be herself at a wedding before. That was the coolest thing anyone could have said to us that night.” Or for the Meyer-Mecklers, the rainbow sprinkles on top of a delicious, ice cream–filled evening.

The Museum of Ice cream, where the reception was held, already has tons of baked-in fun—such as this 490-square-foot pool filled with two-inch rainbow sprinkles—so the brides only had a few decisions to make. They designed the bar signs and added five-pound Gummy Bears (yes, they’re edible) as table decorations and chose a Birthday Cake from Milk Bar, because, says Sydney, “we’re obsessed with it.” And to honor the date, they worked with Stag Dining to create several memorable cocktails named with Pride month in mind, such as the Pride Paloma.

Photography by Jenn Emerling; Event Planning by Be Hitched.

Finding a venue was complicated. Choosing outfits was not. “I saw this Viktor & Rolf jumpsuit in a magazine and knew I needed it!” says Sydney. As for Catherine’s Lihi Hod gown, she recalls, “I slipped it on and felt so elegant.” Since “we love to boogie down,” says Catherine, she changed into a pink flapper dress for the party. Sydney danced in her pink velvet Gucci loafers.