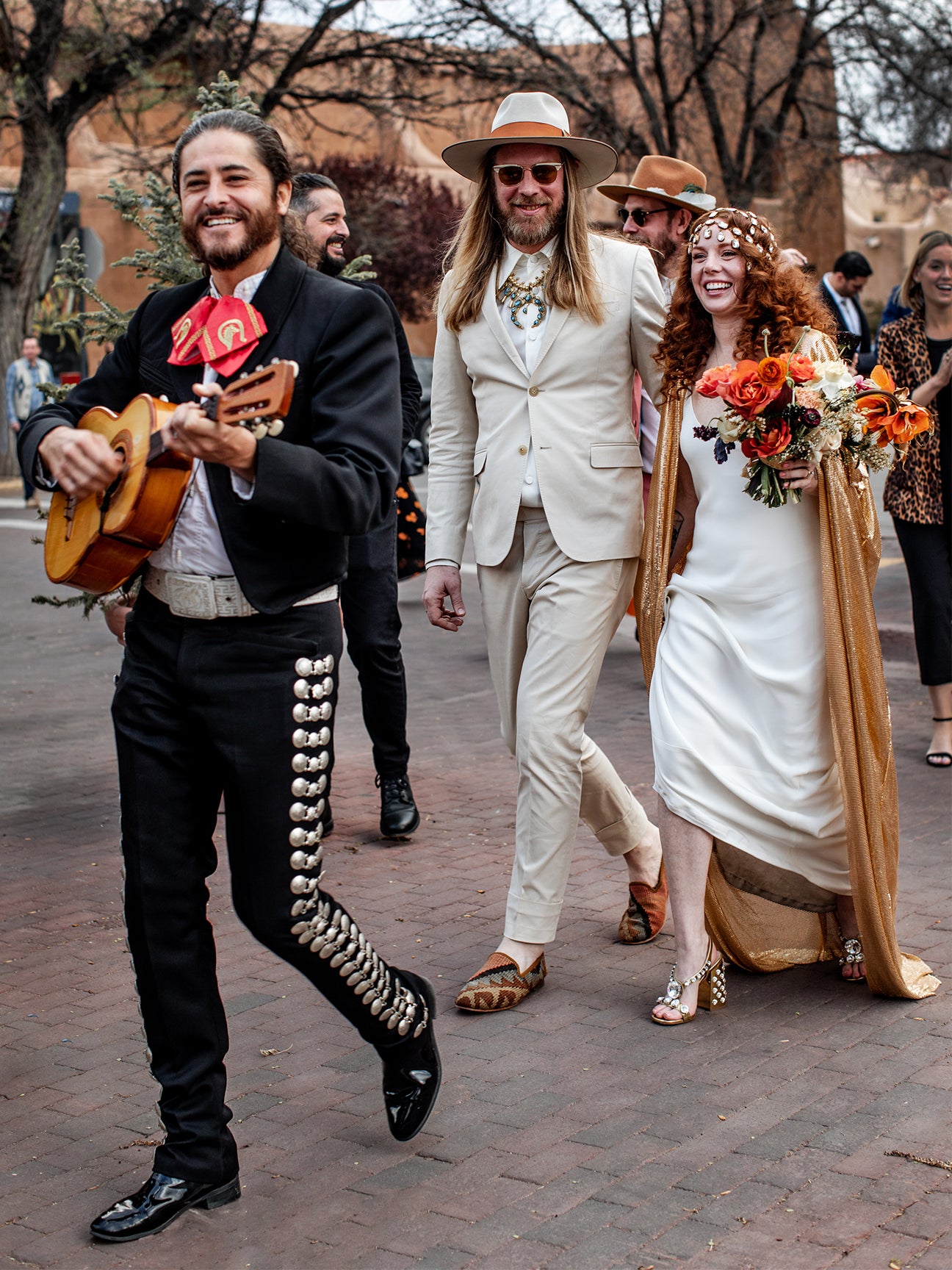 Texas was the original plan when Kari Devereaux and Dylan Boelte began coordinating their wedding. The pair, who met while working at Vogue (Kari was the photo studio manager; Dylan, an art director), went so far as to put a deposit down on a venue and start conversations with vendors. But when they struggled to find housing for all their guests, the arrangement—and their investment—fell through.

Plan B was Bishop’s Lodge in Santa Fe, New Mexico—until they found out the iconic 1920s resort was undergoing a major remodel that wouldn’t be done in time for the big day. Then, while wandering the New Mexico Museum of Art over Thanksgiving, they stumbled upon the courtyard, where a large fountain by artist Jesus Moroles sits at the center of the four adobe walls. “Third time’s the charm!” says Kari.

When the guests checked into their suites at nearby El Rey Court six months later, the couple welcomed everyone at the hotel’s mezcal bar, La Reina. “There was no sit-down dinner or rehearsal,” shares Kari—just good drinks, a taco truck, and speeches. The fashion was the main event: Attendees donned leather jackets, wide-brimmed hats, and snakeskin suits (anything with a little Southwestern flair was welcome). “That’s when we knew it was going to be a great weekend,” she says, laughing.

The bride wore a disco-inspired Gucci headpiece with a simple slip dress from LOHO Bride in San Francisco, while the groom topped his Gucci suit off with a classic Stetson. “We wanted it to feel like a party, not a traditional wedding,” says Kari. Her friend designer Daisy Hartmann created a gold chain-mail cape to go over the top of her gown. Meanwhile, Dylan borrowed an 18-carat-gold squash blossom necklace from the same jeweler that made their wedding bands. “Santa Fe is all about trust,” says Kari. “They let him walk out of the store with it (they didn’t even take his credit card!), knowing he would return it afterward.”

The couple’s guest list was full of creatives—all of whom were eager to lend a hand on the morning of the big day (even though Kari just wanted everyone to have fun). “When our two friends who do hair and makeup for a living heard that I was planning on doing both of those things myself, they were like, ‘Absolutely not,’” she says. Another friend, who owns Flowerhead Tea in California, offered to craft a special punch for the bridal party.

Along with sending the attendees away with customized koozies (Dylan is known for having one in his back pocket at all times), the couple designed Sante Fe travel guides and left one in each of the guest’s rooms along with some palo santo. “I’m the girl people go to when they want recommendations for exploring a new place,” Kari says. “Dylan is a designer, so it was the perfect gift to DIY together.”

Around 5 p.m., everyone circled the courtyard. Because Kari and Dylan loved the museum’s aesthetic as is, the only decor their wedding planner, For the Love Events, added to the space was vintage rugs (for the aisle) and two large arrangements from Renegade Floral.

Kari made her entrance to “Claire de Lune” and a lot of cheering and clapping. “I felt like I was walking down a runway,” she recalls. After the “I do’s,” a mariachi band came out and led the party for a celebratory stroll around the plaza.

The relaxed ceremony was followed by a neon-lit reception at the psychedelic art-event playhouse Meow Wolf, a drastic transition that could only be beat by the bride’s transformation: Before changing into an Elie Saab cowgirl outfit (a stylist friend helped her source the out-of-stock piece soon after her engagement—the top from Beirut; the bottom from Paris), she chopped off her hair. “It was a fresh beginning,” says Kari. “I was a whole new woman.” Instead of doing a first dance, she hopped up onstage with her harmonica for a duet with Dylan of “A Heart of Gold.”

Her only regret: Not enough face time with family. However, the couple did a pretty good job of soaking in the moment. “The best advice I received was to find time together to feel the joy and love,” shares Kari. “When we were at Meow Wolf, that’s what we did: We climbed up to the top balcony where we could overlook everybody dancing, eating, and drinking. It was so special.”

Kari and Dylan did a mini road trip back home to San Francisco, stopping in Sedona, Malibu, and Los Angeles along the way; they leave for their official honeymoon this week. The pair’s next adventure? Tokyo.

See more stories like this:  We Pulled Off Our NYC Wedding for $7K—No Crafty DIYs Involved The Founder of Lrnce Said “I Do” in an Enchanting Moroccan Garden New Orleans Set a Dreamy Scene for This Surprise Ceremony