Complete with a watermelon cocktail bar. 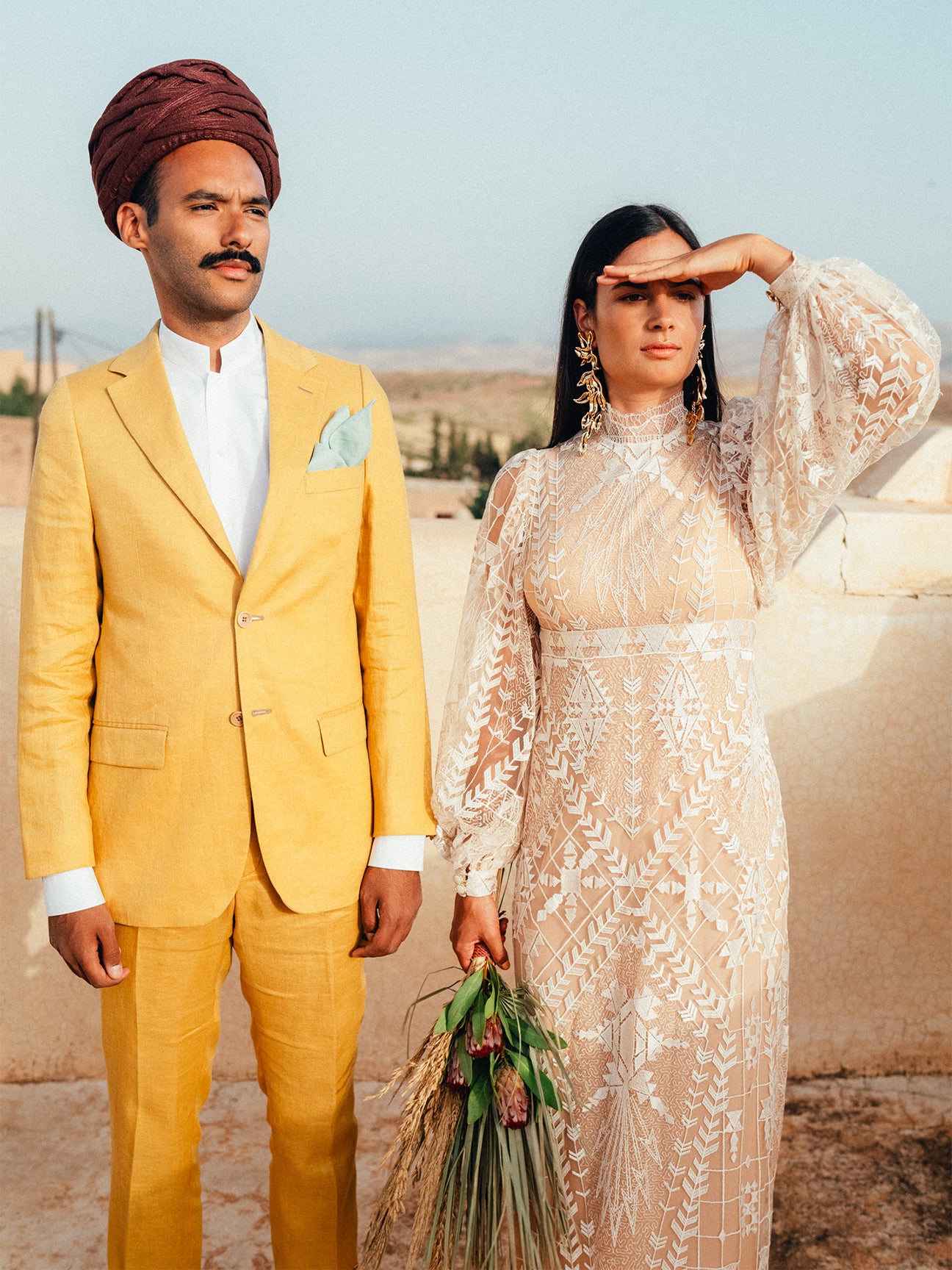 When Ayoub Boualam asked Laurence Leenaert, founder of the Moroccan lifestyle brand LRNCE, to marry him, they were on a boat on Udaipur’s majestic, marble palace–dotted Pichola Lake in India. “Before I knew it, Ayoub was kneeling and asking me the question,” Laurence remembers. “It was the best feeling I ever had.” The scene was set for a truly momentous wedding.

The couple met three years earlier in Marrakech while out to lunch with mutual friends. She had just moved to Morocco from her native Belgium; he was visiting family and friends back home while living in Paris. They had an instant connection and their relationship immediately took off. After two years of long distance, Laurence asked Ayoub to join her company as general manager, and they were reunited back where it all began.

It was only natural that the wedding would take place in the city that means so much to them. “Most of our friends and family who traveled to Marrakech had never attended a Moroccan wedding, so it was already super-exciting for everybody,” says Laurence. The festivities, which stretched over two days, encompassed a colorful adventure meant to delight every sense.

The first evening, a traditional Moroccan celebration, was set in Ayoub’s parents’ garden in the Palmeraie, a palm oasis and resort town just outside the city. Guests were greeted with a watermelon cocktail bar painted by Laurence and taken for a romantic tour of the grounds. The couple made quite an entrance: Ayoub on a camel and Laurence on an ammaryia (a wood platform carried by four men dressed in traditional djellabas) to the song “Paper Planes” by M.I.A. She wore a fuchsia silk dress, Jacquemus sandals, and Oscar de la Renta earrings.

The lush outdoor space was scattered with traditional rugs and poufs for guests to sit on, along with 800 candles and 100 handmade LRNCE ceramics. For the dinner tables along the edges of the dance floor, the bride chose arrangements of palm leaves, olive branches, oranges, and protea flowers, her favorite. “I wanted the evening to be a good mix of both worlds, so we made it a bit more modern than traditional Moroccan weddings,” says Laurence.

During the ceremony the couple sat on a light blue bench, designed by Laurence, with their mothers. There, they exchanged a glass of milk and a date, a gesture that symbolizes welcoming each other into their respective families. Everyone dug into a Morrocan feast complete with pastilla, couscous, méchoui, and a lot of fresh salads.

The second day was reserved for the couple’s closest friends and family, so they selected a more intimate setting: the city’s trendy Hotel Tigmi. “We arrived on two donkeys while everybody was waiting on the rooftop where the ceremony was happening,” remembers Laurence. She wore a white lace dress by Sandra Mansour and earrings by Chloé; Ayoub sported an ochre linen suit and a turban handmade in Marrakech.

They were married at sunset by one of the groom’s best friends. “He even prepared a song with everyone,” she says. “It was magical.” As part of the ceremony, the guests passed around the couple’s rings in a small ceramic tajine—featuring hand-drawn motifs by Laurence, of course—and each made a wish as they held the box in their hands. After sunset, everybody headed downstairs for a reception filled with music and a Lebanese feast of salads, fresh fish, and meat brochettes. Exotic cocktails, like a piña colada with orange blossoms, were mixed especially for the occasion.

Dried flowers, palm leaves, pampas grass, and more proteas set the scene. Friends and family sat at long wood tables with hand-painted tile tops, surrounded by embroidered pillows and handwoven blankets, and danced by the pool well into the night. If there was anything that could top getting engaged on a sparkling lake in Rajasthan, this was it.