Here are her tips for a perfect, casual day. 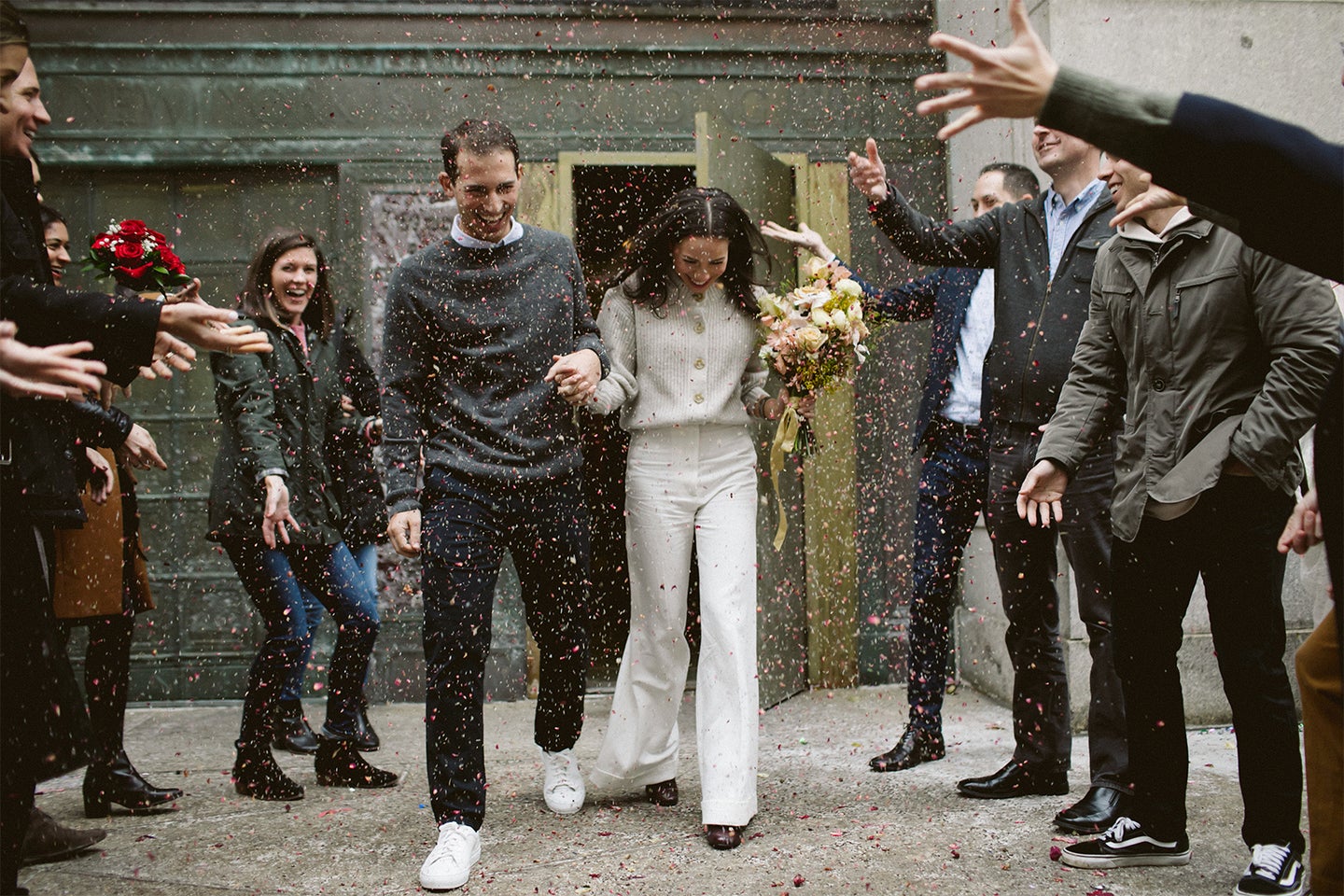 Since Amy Liang and John Stecker met at the University of Michigan in 2006, they’ve criss-crossed the country, living in New York and L.A. with a stop in Wisconsin. But when it came time to plan their December 2019 wedding, they kept everything close to the Brooklyn neighborhood that’s become their permanent home base. The couple got ready together at their Boerum Hill apartment, tied the knot at City Hall, and took the subway back to celebrate at their favorite cocktail bar on Atlantic Avenue, Elsa. Liang, a retail marketing and development director at Goop, planned the day herself in order to keep it all low-key.

“I work closely with our events team at Goop; I know the kind of grand scale of parties that you can do,” says Liang. For her wedding day, though, she wanted the opposite. “Both of us shy away from being the center of attention, so we really just wanted family and friends and to keep it intimate,” she says.

Here’s how Liang pulled off the perfect, casual day, from booking her good friend as the DJ to finding a “random” $100 sweater for her ceremony look.

Invite Everyone to City Hall

Both Liang and Stecker were surprised by how many of their friends wanted to attend their City Hall ceremony. “We thought, ‘Oh, we’ll just have our parents come in, and they’ll be the witnesses, and that’s all we need to do,’” says Liang. “Then, everybody ended up showing up and sharing in that excitement.”

They had over 30 pals and family members in attendance at their Friday morning ceremony, which made it feel like a party. City Hall is “like the DMV, but everybody is in a good mood,” says Stecker.

Later in the day, Liang and Stecker made extra time for their immediate families with a small, 18-person dinner at Rucola, a favorite restaurant that’s right across the street from their apartment. After dinner, even more friends—about 65 in all—gathered to kick back with cocktails at Elsa.

Liang and Stecker dressed comfortably for the ceremony. “We’re both pretty casual people, and I feel like we would have felt a little awkward doing ‘dress up’ all day long,” says Liang. For her first look, she found white pants at Goop, “and then the sweater was just a random purchase from Everlane. I was like, ‘Wow, this is cute!’” (You can find the same one online for $100.)

For the cocktail reception, Liang originally planned to wear an A-line Valentino gown, but in the end she wasn’t sold on the tailoring. Four days before the wedding, she stopped at Bergdorf’s after work and bought a different, slinkier high-necked dress, by Co., that suited her much better. That night, the couple had their “first look” so Liang could show Stecker her new find.

Tap Your Friends for the Important Stuff

To keep everything easy and comfortable, Liang hired her friends for some of the day’s most crucial tasks. Married couple Ro Agents of Les Loups and Kenan Juska (aka Chances With Wolves) served as photographer and DJ, respectively. Having that comfort level with the vendors made it easy to relax and enjoy the day, says Liang: “We actually got to chit chat and spend good quality time with them.”

Schedule Time to Chill Out

The key to a truly relaxing wedding day? A spaced-out timeline, say Liang and Stecker. Both were so happy they took a break to hang out together in between the ceremony and dinner. (Stecker even snuck in a run with the couple’s dog, Tuna, while Liang started to get ready for the evening festivities.)

“Having activities from morning to night gave us a good chance to have time with each other and have time with our friends and family,” said Liang. And after it was all over, they hosted a morning-after brunch at their apartment to soak up the good vibes even more.