It even has niches for flowers. 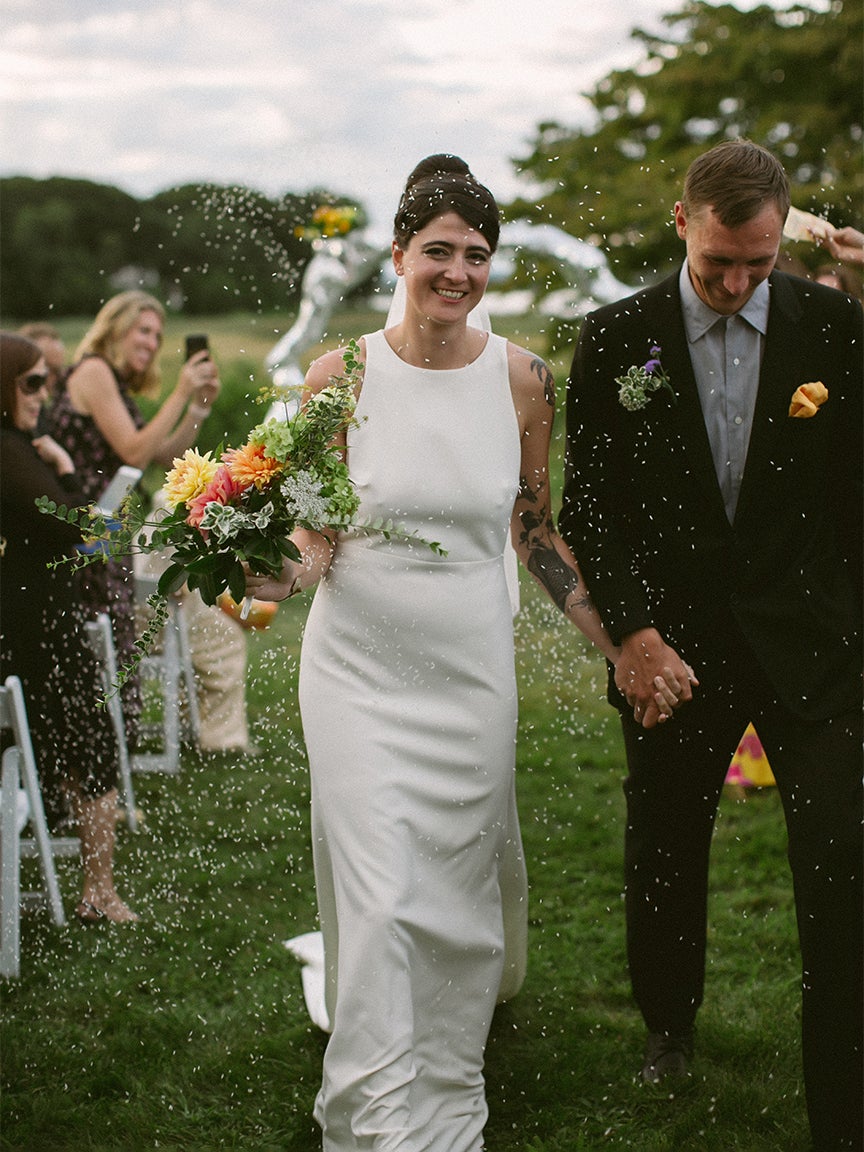 When visual artists Sophie Lvoff and Elia David met at a party just outside of Paris, it was coup de foudre—or “love at first sight.” Elia, who was living in Normandy at the time, was in the DJ booth with a friend. Sophie, an American, was visiting from Lyon, where she was doing her artist residency. “It was like the dance floor just sort of opened up,” recalls Sophie. She went over immediately to ask what he was spinning. “It’s incredible to think that that song would play less than two years later as we kissed for the first time as husband and wife at our wedding,” she adds.

Sophie had to lay some serious groundwork before jumping into the planning phase—her groom-to-be had never been to a traditional wedding before. The preparations included watching Bridesmaids, Father of the Bride, The Wedding Singer, and an Australian TV show called Cheapest Weddings (Elia’s personal favorite). Still, the pair didn’t follow all the typical protocol. For one thing, they didn’t have separate bachelor/bachelorette parties. Instead, they took a group of friends out in Manhattan’s West Village neighborhood to go barhopping. Their official creative touch came in the form of an elaborate mosaic arch, which they made together for the ceremony space. “We wanted to use our time together to create something that was really about art and love,” says Sophie. To say the mirrored sculpture was a labor of said love would be an understatement.

Sophie’s parents’ four-acre property in Old Saybrook, Connecticut, was the obvious venue choice for the August event. The lush landscape is perfect for large outdoor gatherings, but more important, the area is known as the home of American Impressionism—something that resonated with both David and Sophie.

Around 20 out from the wedding, the couple got going on the arch—a piece partly inspired by the work of French sculptor Niki de Saint Phalle, who often created monumental pieces with her partner, Jean Tinguely. The pair built the skeleton out of wood, chicken wire, and newspaper, leaving two small niches for bouquets of flowers. David Brown, a gardener and guest at the wedding, handpicked the florals for the day.

After constructing the main part of the arch, the couple plastered the whole thing and adhered broken pieces of mirrors with silicone glue. The ambitious project took more than two weeks to complete (they finished just before the rehearsal). “It was relaxing to work on this together, but it was also a lot of pressure,” says Elia.

An artist friend of the couple created abstract table centerpieces that looked like the arch, and Elia’s menu designs featured his original sketch of the piece. He also jotted down the seating charts on plain graph paper after the couple realized at the very last minute that they had forgotten all about the detail.

With their shimmery sculpture glistening in the background, the couple exchanged vows in French and English. A longtime friend of Sophie’s officiated the ceremony. “He did a good job at introducing Elia to everyone, given it was his first time meeting many people in my life,” she says. Sophie wore a dress she found in Paris designed by Sophie et Voilà (a happy coincidence); Elia donned his father’s vintage Charvet suit and shirt—an homage to his parents, who couldn’t join them for the U.S. celebration.

The pair booked Brooklyn-based couple Kenan Juska of Chances With Wolves and Ro Agents of Les Loups for the music and photography, respectively. “They were so helpful on the day of. Because we didn’t have a wedding party, they served as our attendants,” says Sophie. As guests began to roll toward the dance floor, Elia pulled out his musical saw and played “La Marseillaise,” the national anthem of France. It was a fitting choice, given the pair had just decided to move to Marseille that fall—the place where they would eventually host their second wedding and start their life together.