We Bought Our Wedding Flowers at 5 a.m. on the Morning of the Ceremony

The eleventh hour is secretly the best time to plan. 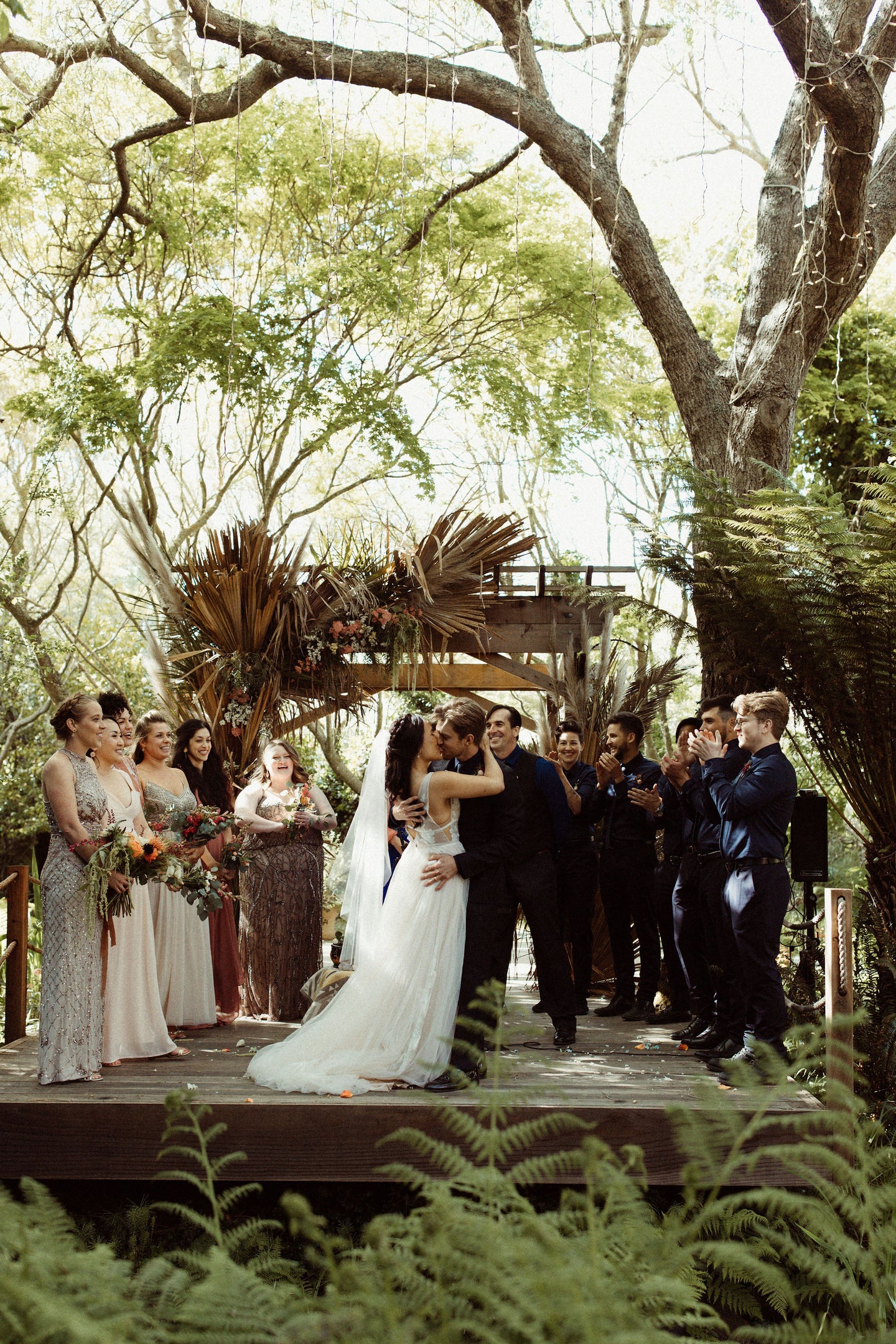 You could say the stars aligned when wedding photographer Siouxzen Kang and actor and musician Chris Brochu met on the dance floor at a friend’s wedding in 2015, but it was really the full moon that brought them together. “The crowd parted; I saw her; she saw me. That was the beginning,” says Brochu. A few lunar cycles later, Brochu proposed to Kang on a backpacking trip to Mount Whitney during an intense summer heat wave, and by the fall of 2018, they were diving into wedding planning.

It wasn’t until Kang started searching hashtags on Instagram one day that she found the perfect venue. “It’s literally called the Secret Gardens,” she says, referring to a lush forest space in Bodega Bay, a small town in Sonoma County an eight-hour drive north of Los Angeles. Kang immediately called up a friend who lived nearby to scope it out. “Get up here quick,” was the gist of her pal’s report.

There was one catch when the couple sat down with the coordinator to pick a date: The only feasible weekend in 2019 was a mere five months away. But the couple didn’t hesitate: “There was going to be a full moon that night,” Kang points out. Here, the couple look back on following that sign—and what it was like to turn around a $50,000 wedding on such a tight schedule.

They Didn’t Sweat the Small Stuff

Because both Kang and Brochu have backgrounds in production, they were confident they could get everything done—book the vendors, send the invites, determine a theme—under a time crunch. Having gone through the motions with other couples for years, Kang knew which elements deserved lots of attention (the menu) and what they could avoid altogether (the party favors). “I know they often get left behind,” says Kang.

They Foraged for the Decor

A series of rain storms hit L.A. in the weeks leading up to the wedding, leaving a ton of palm fronds down in a park near Kang and Brochu’s home. The couple took full advantage of the aftermath, filling up their truck with the giant leaves. On the morning of the wedding, an artist friend helped them build an installation around the altar space, using the fronds and some pampas grass from the venue’s property. “We didn’t take anything that was alive—we just picked it up off the ground,” says Kang. The couple also repurposed driftwood they found on the beach for the centerpieces; Brochu drilled small niches into the wood for votive candles and small test tubes of florals.

They Put Off the Flower Arrangements Until the Last Minute

Kang and Brochu set their alarms for 5 a.m. on the big day. Their mission: head to the local floral market and get as much as they could for $300. “Mind you, it was Easter weekend, so the pickings were already slim,” Kang recalls. At the mercy of a small fridge, the couple snapped up anything that was fresh and fit within their blush-toned color scheme, then popped into a Trader Joe’s to grab a few bunches of blooms to fill in the gaps.

“I didn’t want to spend thousands of dollars on something that I know is going to get thrown away. ” — Kang

“I didn’t want to spend thousands of dollars on something that I know is going to get thrown away,” Kang explains. The wedding party DIY’d their own bouquets and boutonnieres that morning while everyone got ready. “There’s so much down time,” says Kang. “It’s fun to come together and start cashing in those favors people owe you.”

They Didn’t Do the Traditional Aisle Walk

Surrounded by towering redwoods, ferns, and wildflowers, Kang and Brochu couldn’t have picked a more magical setting. The thing was, the couple would be saying “I do” on a wooden platform overlooking a creek, while their guests sat and watched from the other side of the water. Luckily, the wedding party was more than happy to step up to the plate. The small group of friends and family congregated around Kang and Brochu as they walked down a pathway on the other side of the creek. “It felt like we were going to a pep rally and they were our teammates,” she remembers.

advertisement
“It felt like we were going to a pep rally and they were our teammates.” — Kang

They Made the Playlist Personal

With so many talented friends in attendance, the couple wasn’t going to let anyone who wanted to contribute to their wedding stand by the wayside, especially those with musical chops; Brochu and Kang called on guests to perform throughout the day. One friend sang Nick Drake’s “Pink Moon” (a fitting choice, given the theme) as Kang walked toward the altar, while two others picked up guitars during the cocktail hour. However, no one could top the original song Brochu performed onstage during the party.

By the time the clock struck midnight, the crowd started to fade, and once again, they found themselves on a dance floor under a full moon.

See more stories like this:  We Pulled Off Our NYC Wedding for $7K—No Crafty DIYs Involved An Impromptu Mariachi Band Was Only the First Surprise at This Santa Fe Wedding This Wedding Married India, Pakistan, and Italy in One Floral Fantasia