This Couple Shopped Their Apartment for Their Wedding Decor 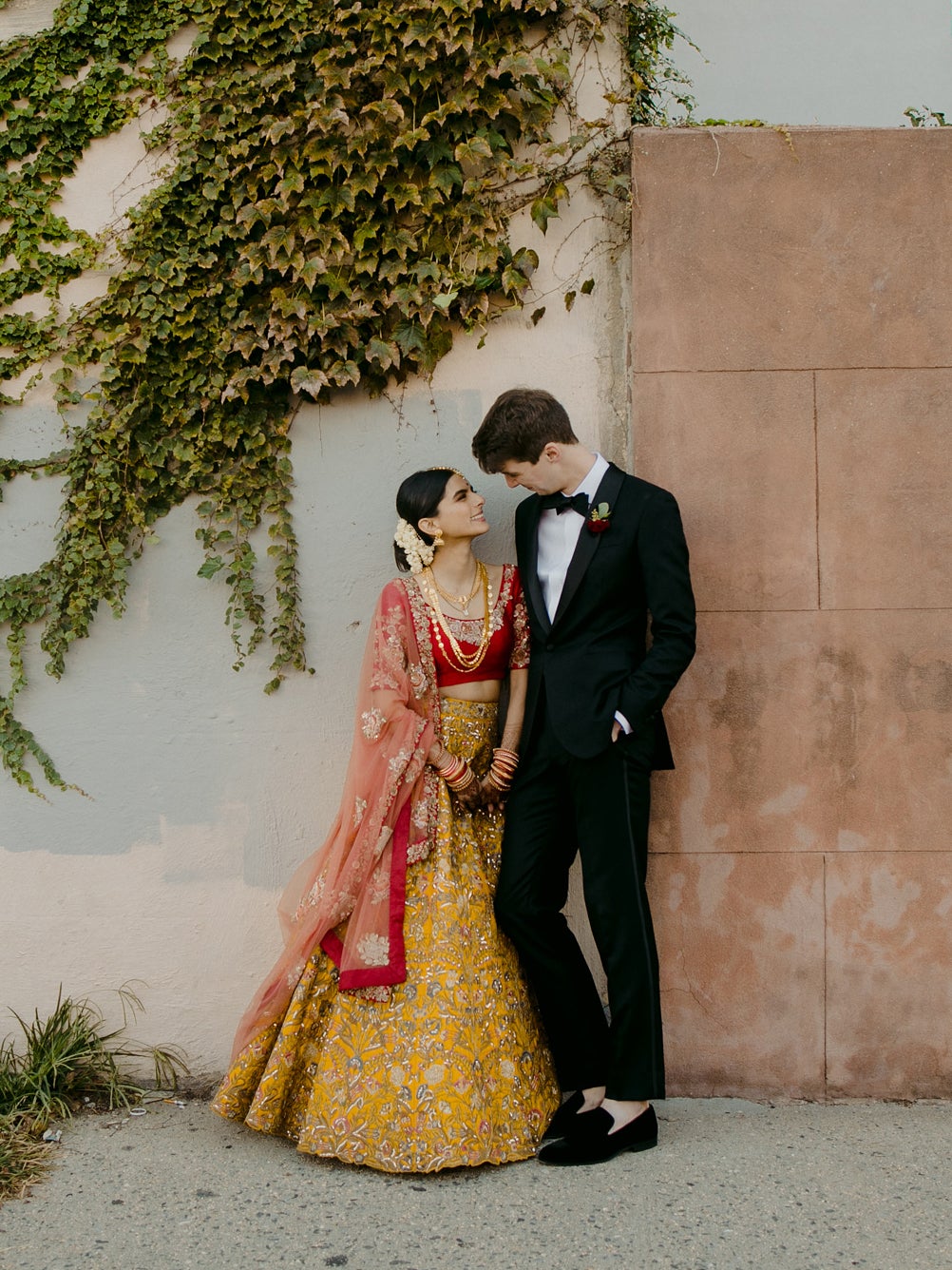 Megan Karande and Dan Fallon’s save-the-date didn’t have all the formalities of a typical reminder. It wasn’t a photo of them all dressed up standing in a dew-covered field. Instead the card depicted an average Saturday at their Park Slope home, the space they’ve shared for six and a half of the 10 years they’ve been together. The scene—hand-illustrated by Megan—features the couple on their sofa under a blanket, books in hand, with their two cats, Pippin and Lentil. This is how you’ll find them most weekends, especially in the colder months. “If we could have had the wedding in our apartment, we would have,” says Megan, laughing.

The pair didn’t end up hosting 125 guests at their place, but they did stick to a tight, 10-minute walking radius within their Brooklyn neighborhood, holding the October 2019 ceremony and reception at 501 Union in Gowanus. It was a full-circle moment, given Dan had proposed to Megan on a nearby bridge overlooking the Prospect Park Boathouse. On the morning of their wedding, before they got dressed or began greeting guests, the couple took a stroll through the park and, later that afternoon, Dan stopped by his favorite coffee truck. “We looked at some venues in upstate New York, but we realized we really love our home,” says Megan. “We wanted our family to spend time here. This place captures our life perfectly.”

Take All the Recommendations You Can Get

Allowing themselves more than a year and a half for planning meant Megan and Dan could book almost all of the vendors they wanted. It also helped that they got suggestions from their older siblings. The pair ended up using the same photographer as the bride’s sister and the same florist as her cousin. “We benefited from all the other people who planned events before us,” says Megan.

Years ago, Megan learned letterpress from a friend who was doing it as a hobby. Now she and that friend have turned it into a small business called Bergamot Studios, so it only made sense that the two of them ended up designing all of the paper goods for the wedding, from the programs to the place cards to the table numbers. Lentil and Pippin made a second appearance on the bar menu, which featured cocktail names that reflect the couple’s lifestyle, like We Don’t Go to Manhattan—a combo of rye, vermouth, and bitters.

“If we could have had the wedding in our apartment, we would have.”

Megan called in Nira Alamgir, an artist from Queens, to create her mehndi at the henna party that took place a few days before the actual wedding. The gathering was a drawn-out one (Megan estimates it took around five hours to do the henna). “I couldn’t move, so in some ways, it was a great opportunity to relax,” she says. NB Beauty & Co. did the bride’s hair and makeup on the day of.

Pack a Bag of Decor From Home

The ceremony space’s industrial-greenhouse vibe sufficed as an idyllic backdrop, though their florist, Vanessa Planco of Verde Flowers, added a mix of ruscus and smilax to fill out the lush scenery, as well as orchids, gloriosa lilies, and dahlias (also seen at the reception and on the cake). Flowers by Bhanu provided the jasmine flowers Megan wore in her hair and the garlands for the ceremony.

Almost everything else, decor-wise, came from Megan and Dan’s apartment, including photos of the duo from a holiday office party from five years ago, candlesticks, and other objects. “We’re clearly not minimalists,” says Megan, laughing. “It made the space feels so much more personal.”

“It made the space feel so much more personal.”

Lean Into Your Free Spirit

For the traditional Hindu ceremony, officiated by Sushma Dwivedi Jindal, Megan wore a lehenga by Shyamal and Bhumika that she bought during a trip to Mumbai, but switched into a breezier dress for the reception, where James Mulry deejayed and Comparti Catering dished up a family-style dinner for the evening. (The jewelry and heavy hand-embroidery made the garb too heavy to move around in at the party.)

“More than anything for the day, what we really wanted was a fun dance party,” she says. It’s a good thing she changed, too. The second red gown by Maria Lucia Hohan was torn on the dance floor.

Invest in a Point Person

While they originally hadn’t planned on a day-of planner—someone who deals with the vendors and keeps things moving according to schedule—after hearing from multiple friends that it was worth sparing themselves the headache, the couple tacked it onto their budget. “It was the best money we spent,” says Megan of hiring Starling on Bond. “We didn’t get asked a single question the whole day.”

To extend the night, the couple went to a familiar karaoke bar, Insa, down the street for the after-party. “Dan fell asleep,” recalls Megan. They spent the night at a local bed-and-breakfast where Dan’s visiting family was staying. The next morning, they walked home. And, says Megan, “we didn’t have to pay for a cat sitter.”