At Their Technicolor Farm Wedding, This Couple Walked Down the Aisle Together

“Plan a party you want to attend.” 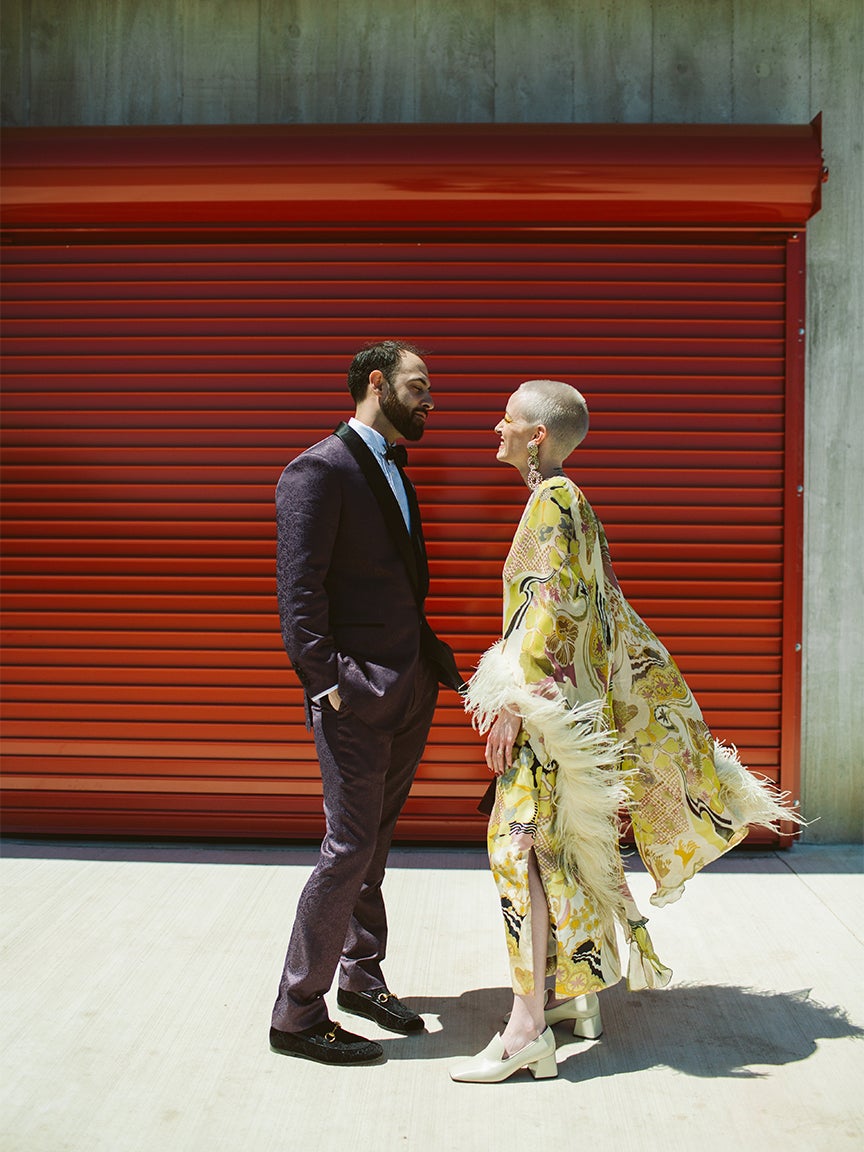 Renee Dumaresque and Chris Hatcher first met as grade-schoolers in St. John’s, Newfoundland and Labrador, Canada, and they quickly became best friends. It wasn’t until 20 years later that their relationship turned romantic, and they’ve been together ever since. “I really do think the relationship fits like a glove because he’s my best friend first, lover second,” says Renee.

When it came time to plan their 2019 wedding at a small farm in Ontario, the couple took their time, creating a ceremony that felt right for them. Renee, a community organizer and transdisciplinary writer, and Chris, a film and television producer, wanted to challenge “some of the heteronormative stuff that can apply pressure to how wedding decisions are made,” says Renee. As a nonbinary person, Renee tried to find ways to explore themself and their relationship with Chris, bringing their guests along for the ride.

The couple chose to forgo certain traditions (like having a wedding party) and update others (they walked down the aisle together as a couple). They also added unique elements to the celebration, including a very popular cannabis bar at the reception. “It was really important to us to have a wedding that reflected who we are, and to offer that to people in our lives,” says Renee. Here’s how they made it all happen.

Bring in Your Friends

While Renee and Chris had help from a wedding planner, Shealyn Angus, the couple also relied on their friends to make their big day special. Even though they did not have a traditional wedding party—they wanted to keep the ceremony focused on their story as a couple—their pals were involved in almost every aspect of the party.

“My friend Julia played a huge role in bringing it all together,” says Renee. “She suggested that I think about having industrial fluorescent-tube lights on the ceiling of this really old rustic barn for the reception.” The same friend also helped pick out their florist, Carmel Floral. Both Renee and Chris carried bouquets as they walked down the aisle together—the moment was “super-reflective of where we’re coming from and the direction that we’re choosing to go,” says Renee.

To get the mood on the dance floor just right, the couple tapped their friends and electronic DJs Stacey Sexton and Adam Harding to handle the music.

Wear What Makes You Happy

Renee started shopping for their attire more than a year before the wedding. They fell in love with multiple vintage pieces at Happy Isles Salon, so they decided to change outfits three times throughout the day. They walked down the aisle in a floral gown with feathered sleeves, accented by a beaded face mask by Sheridan Tjhung. The look “allowed me to play with the tradition of wearing a veil,” says Renee.

For the reception, Renee changed into a metallic gown with a white feathered kimono. When the dancing began in earnest, they put on a latex number and stylish sneakers.

Another tradition the couple updated? Wedding rings. They knew they wanted to exchange them, but “literally two days before the wedding” they hadn’t yet found one for Renee. They ended up using a “rusted over” ring that Chris wore as a kid—it fit perfectly on Renee’s small finger.

Have the Party You Want to See in the World

Renee and Chris stuck with one simple rule while wedding planning: “Plan a party you want to attend.”

This meant they included all of their favorite things in the celebration: electronic music, salt and vinegar popcorn, and, yes, some THC. The couple set up a cannabis bar for guests complete with Paper and Poste place cards indicating the different available strains. “We knew we’d probably want to smoke a joint,” says Renee. “Why not just have that on the table?”

Thankfully, the couple’s friends and families were chill with that decision.