The Cool Girl’s Guide to a City Hall Wedding

This Brooklyn couple barely had to leave their own backyard to say “I do.” 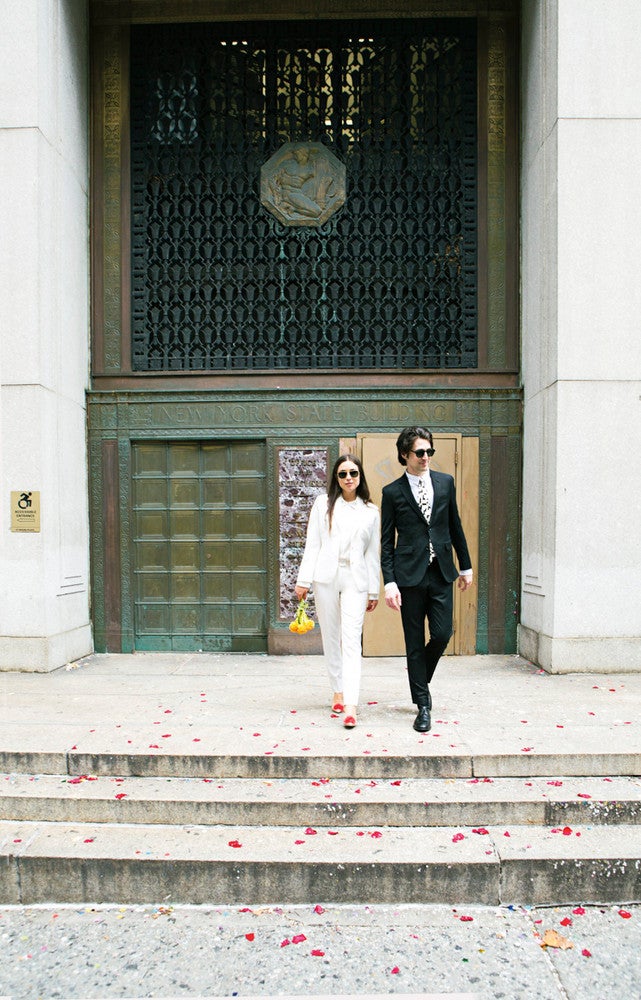 , they hung out on her rooftop in Chinatown. “We went to my apartment and I forced him to play the piano while I lay on the ﬂoor and listened. I remember that I really liked the way he smelled,” says the New York Times Magazine contributor, who also creates crossword puzzles for the paper.

A little over a year later, on New Year’s Eve, while standing by the counter drinking tequila in their Williamsburg loft, Blanks popped the question with an antique diamond inﬁnity band—then presented her with a custom crossword puzzle that contained ‘will you marry me?’ “I started laughing!” says Young. “I couldn’t help it.”

Afterward, they ate a picnic of caviar and fancy cheese and watched TV. Young approached the whole wedding-planning process with the same cool, creative attitude she brings to her work and life: “Basically, we winged the whole thing!”

Here, she shares her DIY guide to a fun, laid-back wedding for the cool girl who doesn’t give a damn about ﬂuffy dresses, ﬂowers, or fancy food. (Warning: Uptight bridezillas need not apply.)

“That morning,” says Young, “I washed my hair and hoped for the best.” A makeup artist she found on Instagram gave her a coppery smoky eye. (“I wanted to do insane raccoon glitter, but she said no.”) Young paired pink pom-pom kitten heels with a custom white pantsuit inspired by Bianca Jagger; Blanks wore a Perry Ellis crossword puzzle tie scored on eBay.

While exploring the City Hall neighborhood, Blanks and Young made kitschy-cool party stores the ultimate wedding photo-op spots. The bride forgot about a bouquet, but a friend picked up “weird orange ﬂowers that look like brains.”

After taking a number and waiting in line, the couple was eventually ushered—along with their parents and childhood friends—into a room. “The whole thing took 80 seconds,” says Young.

Her leopard-print enamel wedding ring was equally easy: “I got it from the Real Real for $100.” After pics were snapped on the stairs outside the Marriage Bureau, which were “covered in confetti from previous weddings,” the newlyweds strolled to the Odeon Restaurant.

Eat, Drink, and Be Married

At the Odeon—a 10-minute walk from City Hall and a Manhattan institution—everyone feasted on hamburgers, french fries, doughnuts, and “lots of champagne!” says Young, who loves the restaurant’s “old-school New York, 1980s vibe.”

Skipping catering and venue renting allowed the couple to focus on having a good time with way less stress. That night, Blanks and Young stayed at the Greenwich Hotel in Tribeca (a present from her brother), where they “jumped on the bed, ordered tons of room service, used all the toiletries, and fell asleep by 9.”

The next day, Young prepped for the post-wedding celebration, hosted in their apartment. “My brother brought over 30 cases of fancy beer that we put on ice,” she says. A bartender, whom they found on Yelp, made signature drinks like bourbon mint juleps (a nod to Blanks’s Southern roots).

At 2 a.m., when the last of the 140 guests had left, Young ate a whole banana cream pie in her pajamas: “The next morning, I treated myself to a cleaning service so I could just sit around and relax and recap the whole night. That’s the best part of any party.”