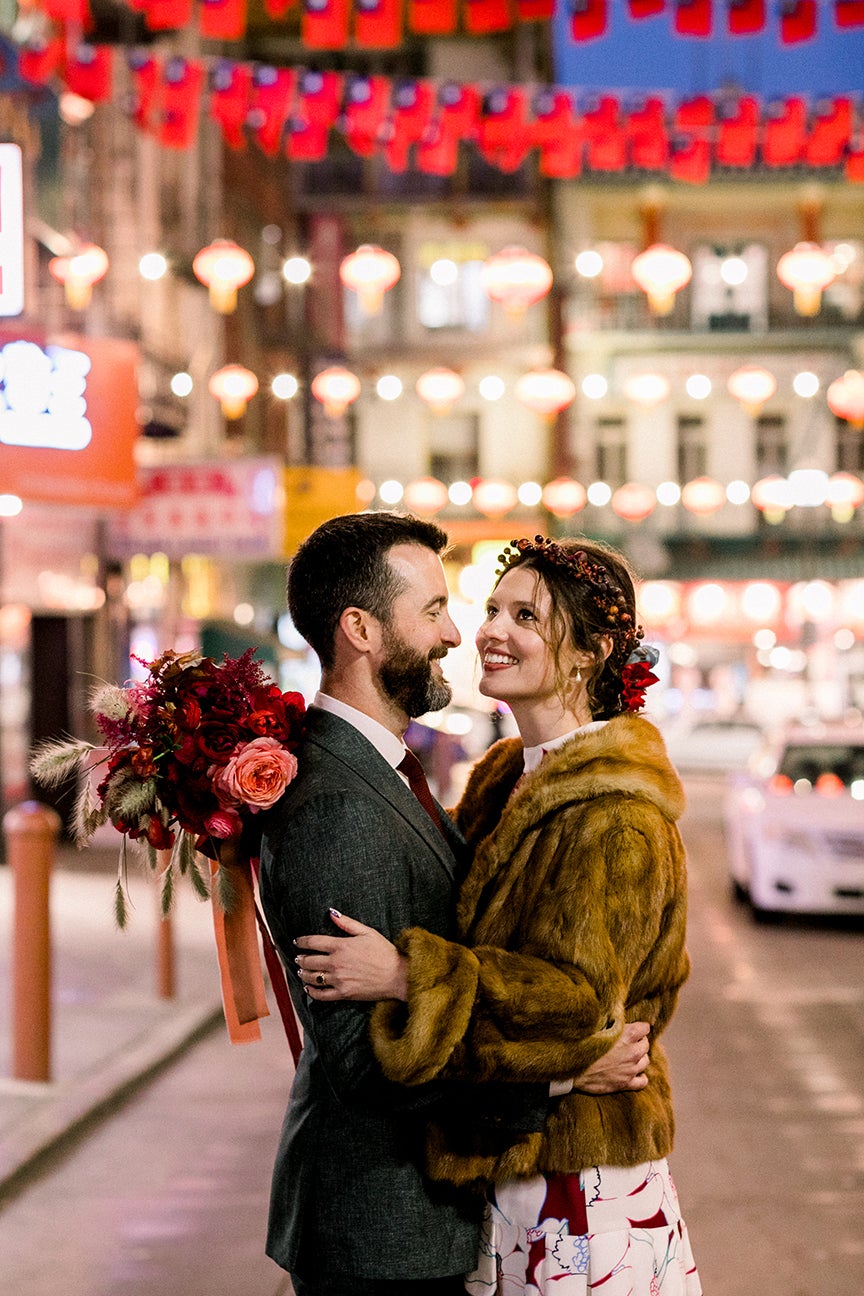 San Francisco was always the backdrop of Autumn Cameron and Jason Conn’s love story. They connected through a mutual friend when Jason visited for a job interview, met up at the Ferry Plaza farmers’ market, and remained friends once Jason moved to the city. Years later, they went on their first dinner date, and a few more years after that, they got engaged—after dining at the same restaurant. So when it came to planning their wedding, they wanted to keep it close to home. “This is our city,” says Autumn.

Their planning process took about six months and was coordinated by sisters Heidi and Sloane Haglund of Framework Events; by chance, Autumn attended a “newly engaged” seminar, where she won a raffle giving away a free month of consulting with the company. She was so pleased with their help, though, that they worked together up until the reception.

What the couple knew was that they didn’t want a traditional wedding—instead they opted for a small, family-only ceremony at San Francisco City Hall and then a reception of about 70 guests at the chic Chinatown cocktail bar Moongate Lounge. With the perfect settings locked down, they focused on how small details could make their day even more perfect.

They Made Time for Photos—And a Quick Snack

“Neither of us are huge fans of being the center of attention,” says Autumn. That’s just one of the reasons why they landed on a small City Hall wedding, with Jason’s father officiating and only a few close family members and friends in attendance. They also knew that the palatial space would be the perfect backdrop for their photos—but they hit a small snag when the water was turned off and the building had to be shut down for the rest of the day (thankfully, after their ceremony finished).

They still got some photos in the building and went to the Embarcadero, where they were able to refuel with a hot dog before heading over to Chinatown for their reception. “We were probably more hungry than we realized,” says Autumn.

As soon as the couple heard about Moongate Lounge, which opened just a month before their engagement, they made a reservation to check it out, finding its velvet booths and moody lighting the perfect spot for a relatively small reception. That meant they didn’t have to stress about finding a caterer as well: “We had a really fun tasting,” says Autumn. At the reception, they served amazing food (the most extravagant dish, duck, coming out last), natural wine, cocktails, and a cake baked by the lounge’s in-house pastry chef, who also made ginger cookies for guests in to-go boxes.

Smaller Moments Made Room to Save

“We were hoping not to have to spend a ton of money,” says Autumn. “We realized pretty quickly that was silly in San Francisco.” With Moongate secured as their dream location, they decided to pare back on factors that had less to do with the actual events of the day, finding a common middle ground with invitations and save-the-dates.

Unexpected Details Made the Day

A few additions also made Moongate even more suited for the celebration: peony-filled arrangements by Brynna Levine and table linens in contrasting turquoise and rust—including velvet napkins. “They were probably the fanciest thing I’ve ever seen,” says Autumn, laughing.

At the end of the day, the couple was able to enjoy some (relative) alone time, taking photos and enjoying each other’s company, while also getting the chance to greet and dance with all of their guests. “Seeing all the people you love and who love you back together in one room is really impactful,” says Autumn. “It was really cool having everyone under one roof.”