The daytime party was a no-fuss fete. 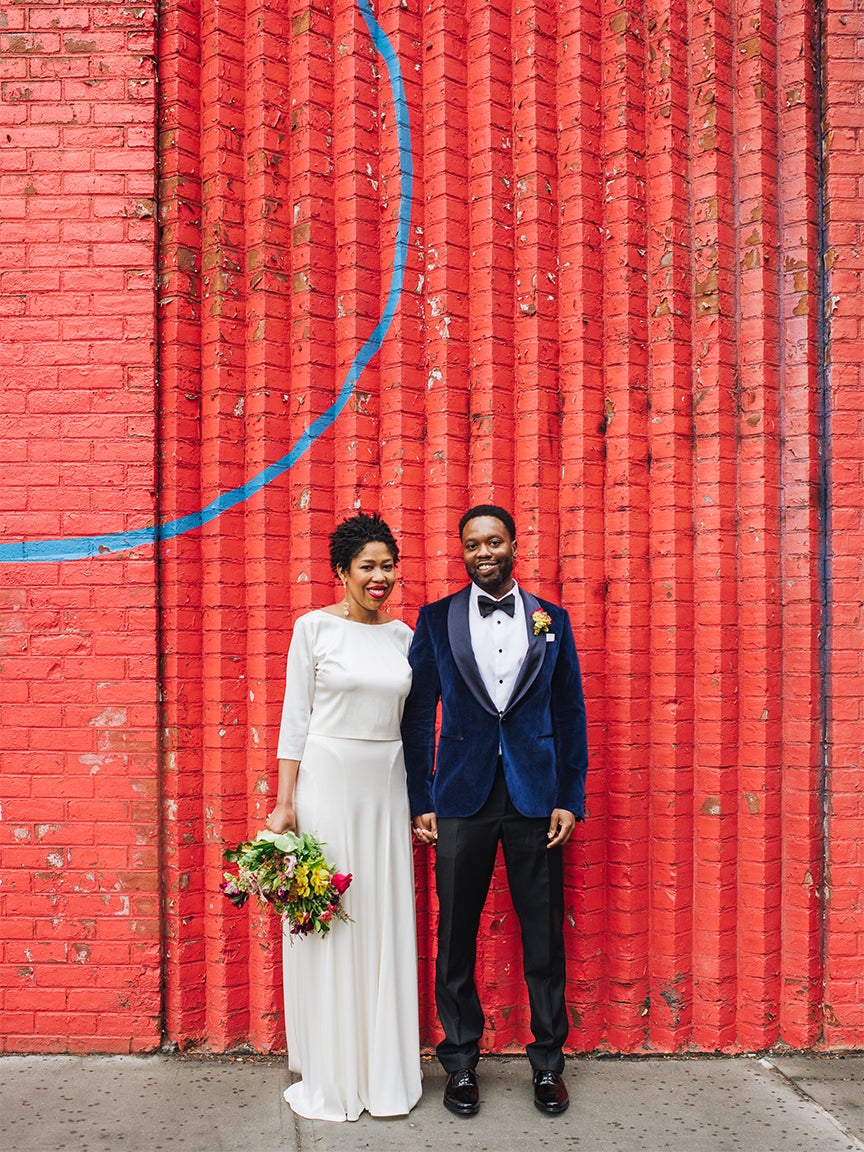 “Brooklyn has always been a big part of our relationship,” says Cynthia Gordy Giwa, one half of the married pair behind the scroll-worthy Instagram account Black-Owned Brooklyn. Together, she and her husband, Tayo Giwa, curate the best of the borough’s food, fashion, and design—all from Black entrepreneurs.

The pair first met in—where else?—Brooklyn, when they matched on Tinder in Spring 2013 and spent the summer getting to know each other by exploring the area’s restaurants, seeing concerts in Prospect Park, and admiring its brownstones. They even got engaged there, during a beach picnic at Coney Island, and proceeded to take a celebratory ride on the famous Wonder Wheel.

So when it came to planning their nuptials, obviously they decided to marry in the city where they met and fell in love. “The unofficial theme was cake and punch in the backyard,” says Cynthia. But instead of having their loved ones over to their Bedford-Stuyvesant home, on the morning of May 12, 2018, they exchanged vows in an intimate ceremony along the steps in Brooklyn Bridge Park, then paraded with their guests to the backyard of nearby restaurant Gran Electrica for carne asada tacos, ceviche tostadas, and mezcal cocktails.

“We wanted something that was really simple and not overly fussy,” says Cynthia. “I have a lot of friends who have gotten married, and I’ve watched them be completely stressed out over all of these elaborate details. I just didn’t want to have that experience. And also, our personalities are more laid-back. Having a very extravagant situation just didn’t really feel like us.”

Here’s how they pulled off a chic ceremony sans planner (they just had a day-of coordinator), with local touches and laid-back style.

Think Outside the Reception Hall

The decision to have their wedding in a public park was twofold: They could exchange vows against the stunning backdrop of the Brooklyn Bridge, and the site fee only cost $426, significantly less than a traditional venue would. It also helped them edit down their guest list—Brooklyn Bridge Park only allows 100 attendees for wedding ceremonies. And banking on the site’s natural beauty meant they didn’t have to go wild with flowers. Instead, they hired Brooklyn Blooms for a bouquet, boutonniere, and their broom.

Take Advantage of the Sunlight

Cynthia and Tayo bucked some wedding traditions—like bridal parties and a nighttime reception—in favor of a laid-back daytime affair that ended at 4 p.m. Having a before-dark celebration that didn’t involve a sit-down dinner helped them keep to their under-$20,000 budget while also giving off a relaxed vibe.

While the pair was rehearsing their first-dance salsa number, Cynthia realized that her long Catherine Deane silk skirt was too long for the twists, turns, and trust falls they’d choreographed. So for the reception, she changed into a sparkly Pamella by Pamella Roland dress she borrowed from Rent the Runway. “It was perfect,” she says. “And you’re only going to wear it for one day, so why not?”