Rather Than Rent Everything, This Bride Spent a Year Collecting Reception Decor 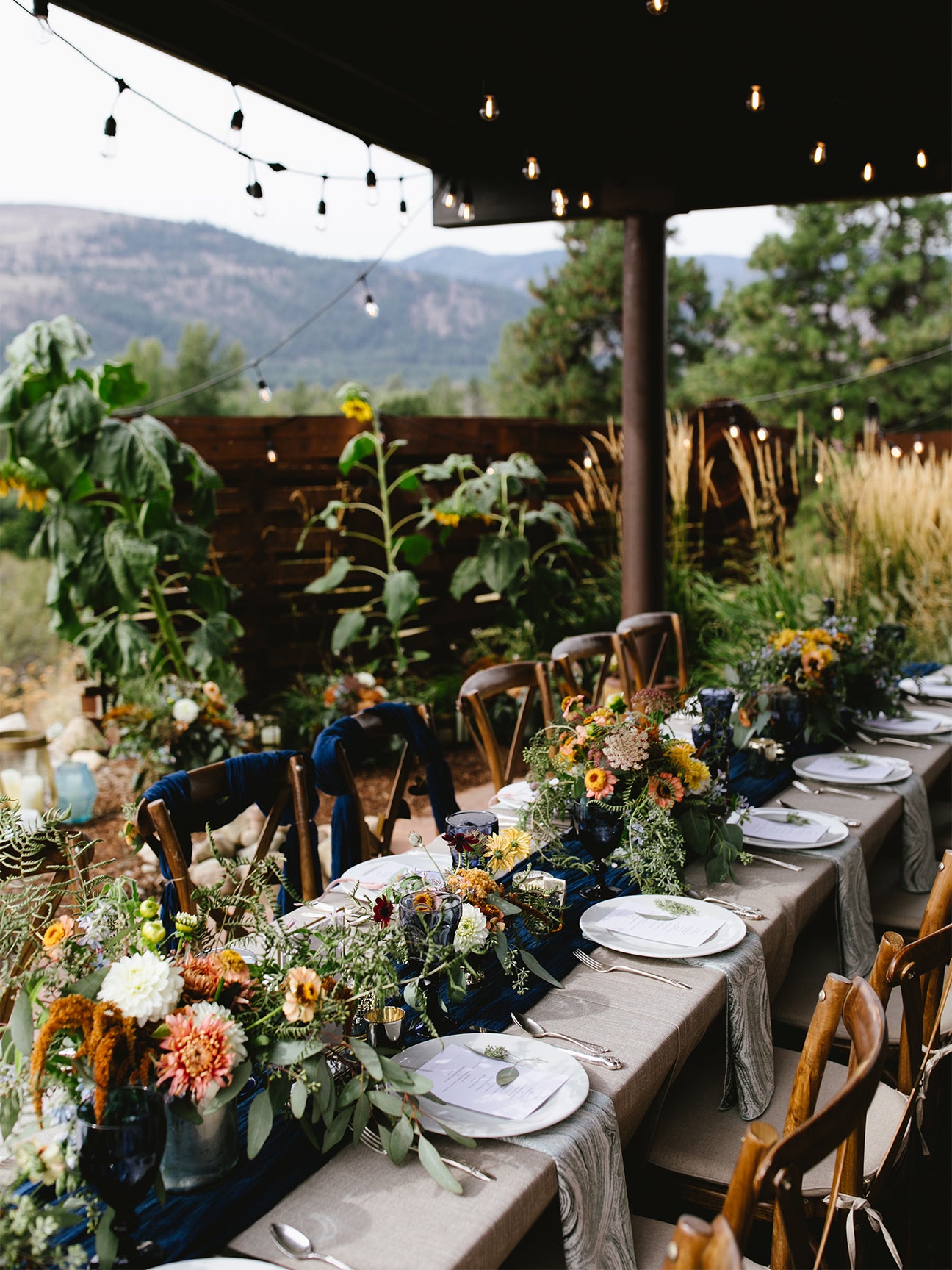 Spring is typically the season for wedding planning, but this year things are a little different. Couples who have had to postpone their arrangements are currently in the throes of replanning. Fortunately, there’s plenty you can accomplish from home, as we learned from Joanna Hawley-McBride. When the creative director and DIY blogger behind Jojotastic married her now-husband, Sean, last September, long before the coronavirus pandemic, she took the reception preparations into her own hands. Working with $18,000, the couple hosted the event at a quaint cabin in Winthrop, Washington, an hour drive from the top of Slate Peak, where they gathered 40 close friends and family for a ceremony at 7,488 feet. “The hardest part was creating the day we envisioned with a limited budget,” recalls Joanna. “We had to make some tough calls.”

The couple trimmed the guest list and skipped formalities like a rehearsal dinner to make room for the cost of an experienced photographer. Additionally, Joanna used the months leading up to the celebration wisely: She borrowed a friend’s budgeting spreadsheet and plugged in the numbers; collected rugs, lights, and candleholders to use for the decor; and put the finishing touches on her gown. Her efforts culminated in an 18-page style guide, because there’s no such thing as being too prepared, right? Here, she breaks down four projects you can tackle in advance.

To add texture to her arrangements, Joanna originally considered spray painting some of the blooms a matte gold, but after doing a few test runs, the petals came out stiff. So instead she scavenged the outdoors for branches and wildflowers—dried blooms that would fit with her organic color palette.

Not every last detail was planned to a T, though. To fill in the gaps, she paid a last-minute visit to the market the morning before she left for the mountains and filled an SUV with seeded eucalyptus, amaranth, tweedia, dried ferns, dahlias, and Queen Anne’s lace. Any leftover stems that didn’t make it onto the table were used to craft a collar for the couple’s dog, Lucy.

The same friend that lent Joanna her wedding budget spreadsheet also helped her make the table runner for the reception. The process started by soaking the textiles in soda ash before dipping the fabric in indigo dye for 24 hours so it became a deep, rich hue. When it came time to set the table, Joanna trimmed the material on-site so it puddled perfectly at the ends.

For a storied touch, Joanna turned a necklace that once belonged to her grandmother into a belt for her dress. Using pliers and wire cutters, she cut off any excess beads and hand-stitched the jewelry into a light blue satin ribbon with matching thread. The couple made other concessions when it came to their wardrobe: The groom wore a suit he already owned and Joanna bought sparkly sneakers from Poshmark.

Get Thrifty With the Decor

For the lounge areas, she sourced side tables, rugs, and string lights from Lamps Plus; lanterns and birdcages from CORT Furniture Outlet; and candleholders from Amazon. “I spent a lot of time scavenging, but it really helped us save money in the long run,” she says. She amassed the objects over the course of eight months or so and stored them in her father-in-law’s basement until the big day.

While plenty of guests went home with bouquets and vases, Joanna hung on to most of the decor she purchased. Two of the rugs are now in her house, and she plans to lend any other pieces to friends who get married down the road.