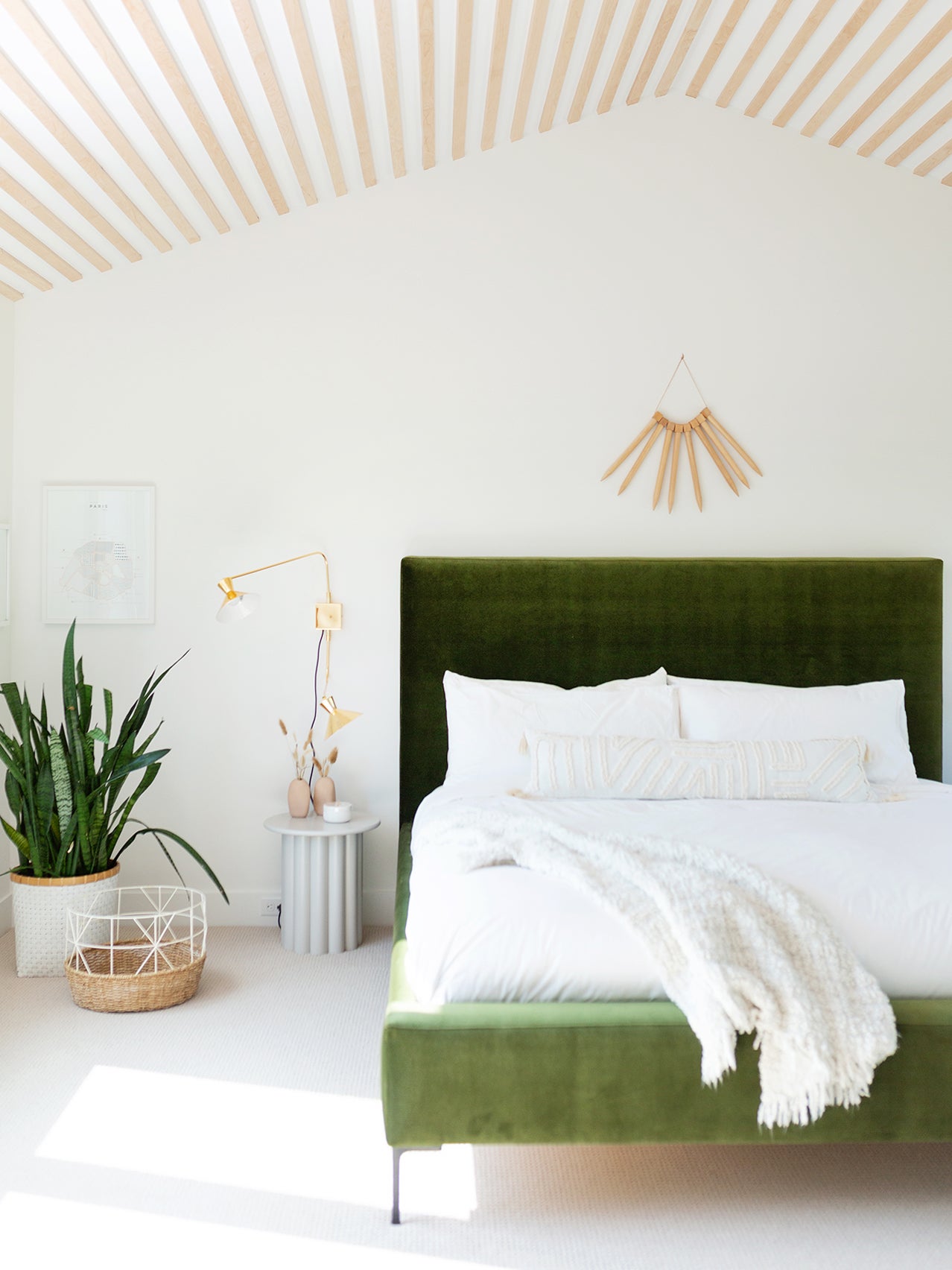 For Marc and Whitney Hanczewski, a new home represented fresh beginnings. After experiencing a series of miscarriages, the couple needed a space to heal and move on. They had grown tired of the sleepy small-town life in Ada, Michigan, and yearned for the city life. After deciding to relocate to Grand Rapids, they turned to KLH Custom Homes’s Liz Hoekzema, who had worked on their first house, to help them start anew.

“With this house, they were ready to push the limits, be freer, and have more fun,” says the designer. “It had been quite a journey for them, so it felt like a gift for us to give them this place where they could move forward.” Their home now represents hope and happiness: full of unexpected bright colors, playful moments, and dreams for the future.

Ombré Is Always In

Hoekzema went for a range of colors she’d call underappreciated, ones that, in her mind, you don’t see often enough in homes: tranquil butter yellows, shades of green, and a gradient of lipstick hues. There’s the raspberry wall in the guest room, which transforms into a bolder blush in the office and later into a cozy lighter blush color in the laundry room. “We love for the laundry to feel like another kitchen,” she says.

Punch Up the Pantry

For the pantry, Hoekzema chose a currant paint, a shade she says felt weirdly good and anchored the kitchen in an interesting and different way. “I had seen images of a European kitchen that was done all in burgundy and it really spoke to me,” explains the designer.

She knew the trendy choice would pay off, and luckily the homeowners agreed, giving her full creative freedom after falling in love with the mood board and palette she presented at their first meeting.

In the master suite, Hoekzema installed a maple ply ceiling to highlight the vaulted space. “We were really interested in doing a unique treatment so it would be the first thing you see,” she says. She chose varying shades of green, from olive to turquoise, to create a tone-on-tone soothing effect that ran into the bathroom.

The Bigger the Better

Layout-wise, the designer placed the vanity in the middle of the master bathroom so it looked more like a kitchen island and created arches leading to the walk-in closet. Then there’s a massive shower and soaking tub that adds to the spa-like vibe. “During our housewarming party, nine of our friends fit into the shower and sent us a picture the next morning to prove that, indeed, you could really have a party in there,” says Whitney.

The home’s modern, dark facade is a welcome departure from its bold interiors, featuring playful archways and a cedar-clad breezeway that seamlessly leads from the front yard into the backyard via a three-seasons room. Outfitted with built-in heaters and peach and gray Cle tile, the room allows the couple to entertain and enjoy indoor-outdoor living throughout the year.

Even the best-laid plans often go awry: Whitney suffered her fourth miscarriage during the construction, so a few of the spaces originally intended for their newest family member were reimagined. One of those rooms is now a cozy hotel-inspired bedroom with a Murphy bed and plenty of storage for whenever guests come into town. “Originally this had been a planned play space where toys would have been tucked away, so some of the roles had to be changed, but it’s still flexible,” Hoekzema says. They finished the space with an inexpensive vintage hanging chair and a geometric pendant from IKEA.

The loft was another place in the house that needed to be shifted. Originally intended for the nursery, it became quite difficult for both the homeowners and designer to walk into the space during this emotional time, so it was transformed to focus on relaxation and creativity. It’s now a lighthearted adult play center with a blush-colored sofa and room for the couple to jam out or sit down for a round of video games, two of their favorite weekend activities.

Now fully settled into their freshly built Grand Rapids home and moving on from the heartache, the Hancezweskis have a brighter outlook for the future ahead.