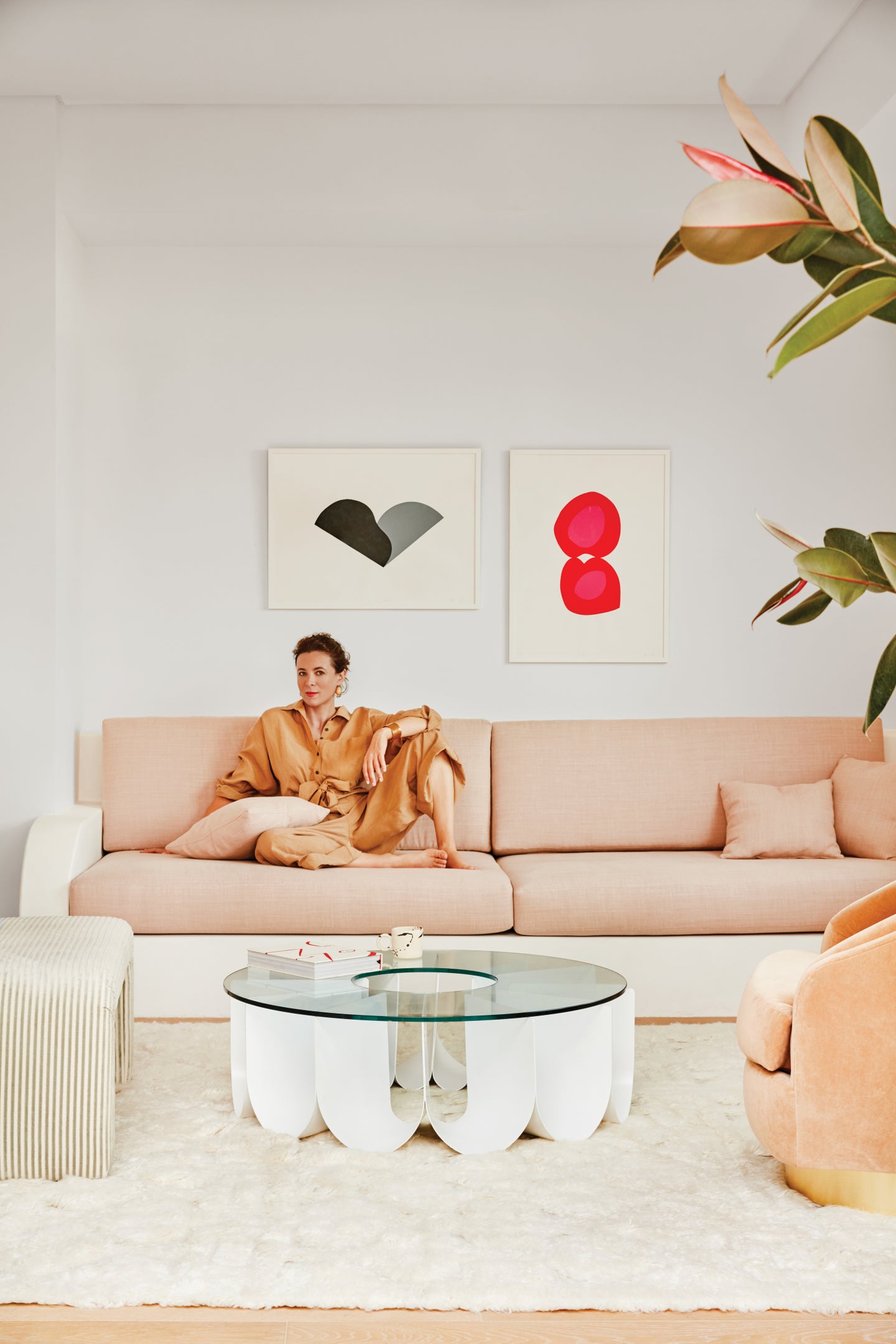 Garance Doré appears on the cover of Domino’s Spring 2019 issue. Subscribe to see the full home tour and be the first to receive each issue!

Anyone familiar with the musings of Garance Doré, the French photographer, writer, style icon, O.G. influencer, and creative force behind Atelier Doré, knows that she doesn’t make rash decisions. Candid essays filled with introspection about her life are as much a part of her brand as her chic and easy approach to style. When the native Corsican and onetime New Yorker decided to buy a large, modern house in Mar Vista and put down more permanent roots in California, the commitment came with some surprises and serious soul-searching.

“I felt like L.A., as a city, was a woman, and she was holding me in her arms, like that Red Hot Chili Peppers song,” says Doré over a cup of tea and a plate of roasted vegetables at the Superba café, near her two-year-old house, which was in the final stages of a much-deliberated renovation just days before this photo shoot took place.

Doré is explaining how she fell in love with L.A. when she spent a month in town finishing her book, Love Style Life, at the Standard Hotel in 2014: “I woke up every morning and could see the whole city. I’d open the windows and write for a few hours. I was so happy. It’s engraved in my brain.”

After some consideration back in Manhattan, she decided that Los Angeles, specifically the west side, was the right mix of urban and wild for her changing, more relaxed outlook on life. “For me, there is a back-to-my-roots kind of thing with the beach,” she says. “It’s grounding to know I am near the water.”

At first, Doré’s vision involved a charming 1940s bungalow or an even older Craftsman with character. But as a first-time homeowner, the repairs and maintenance of an old house felt daunting, and she craved large windows to let in the sunlight and more space for her studio; her dog, Lulu; friends; and family visiting from Europe.

“Once you make this decision—to live in something more modern, built by a developer—the question is how do you add character? How do you soften the edges? They’re often cold and feel like a bachelor pad,” she says. “The house had no charm.”

After conversations with various interior designers, most of whom Doré felt were trying to push her into more expensive choices, she found her match with Sarah Sherman Samuel. Doré says that Samuel, who has a cult following of her own, understood her needs completely.

“Sarah was so open to ideas. I don’t want a decorator to shame me. I was like, ‘Dude, I can’t do that.’ They were all freaking me out with the budget. A person who is less secure would fall for it,” she says, comparing decor to personal style, noting “it doesn’t have to be expensive to be good.”

The first priority was to remove a wall that was separating the kitchen from the living room, creating an airy, loftlike first floor. Next, they replaced a tiny kitchen window to let in that light she craved. Samuel suggested two built-in sofas to flank the fireplace along one of the long walls. They have curved arms, amping up the Mediterranean beach house vibe, and thick cushions upholstered in buff pink linen. Samuel helped Doré select creamy white Moroccan rugs, a hanging basket chair from Chairish, a vintage velvet chair from Sotheby’s Home, and an impressive collection of hand-thrown ceramics, which all delivered immediate warmth and texture to the space. Two vintage Herman Miller chairs upholstered in cobalt blue bring a jolt of vibrant color.

To break up the big-box feel of the living area, Samuel created a nook for Doré’s favorite time of the day—breakfast—with a built-in banquette upholstered in striped linen and raw natural leather, anticipating that the nicks and scratches will add to its appeal. The adjacent kitchen, including the fixtures, GE Café appliances, and massive marble countertops, is completely devoid of shine.

“There’s a richness to matte finishes, like honed marble,” says Samuel, who drew from her signature palette of colors and materials, using soft white and pale peach paint, blond wood, fireclay subway tile, and loads of muted pink and earthy neutrals. Terracotta accents, such as rugs from Block Shop Textiles and handmade pendant lamps from Hand and Eye, add depth and nuance.

“Once you make this decision—to live in something more modern, built by a developer—the question is how do you add character? How do you soften the edges?”

A few more pops of pattern and color, like a guest bathroom covered floor to ceiling in Riad El Fenn blue and white tile, and a bed upholstered in a graphic Kelly Wearstler print, create vignettes that are perfect for—you guessed it—social media.“We are natives in this Instagram world. Sarah and I, we’re always like this,” Doré says as she aims her phone’s camera lens at the low cocktail table, which is perfectly styled with books and objects. “One thing we both really understand,” says Samuel, “is that you need to be able to take pictures in your own house.”

A Massachusetts Farmhouse So Quaint You’ll Want to Move to the Countryside One Couple, Polar-Opposite Styles, and How They Made It Work This Museum-Like Home Puts Our Vintage Collections to Shame