Inside a vintage oasis. 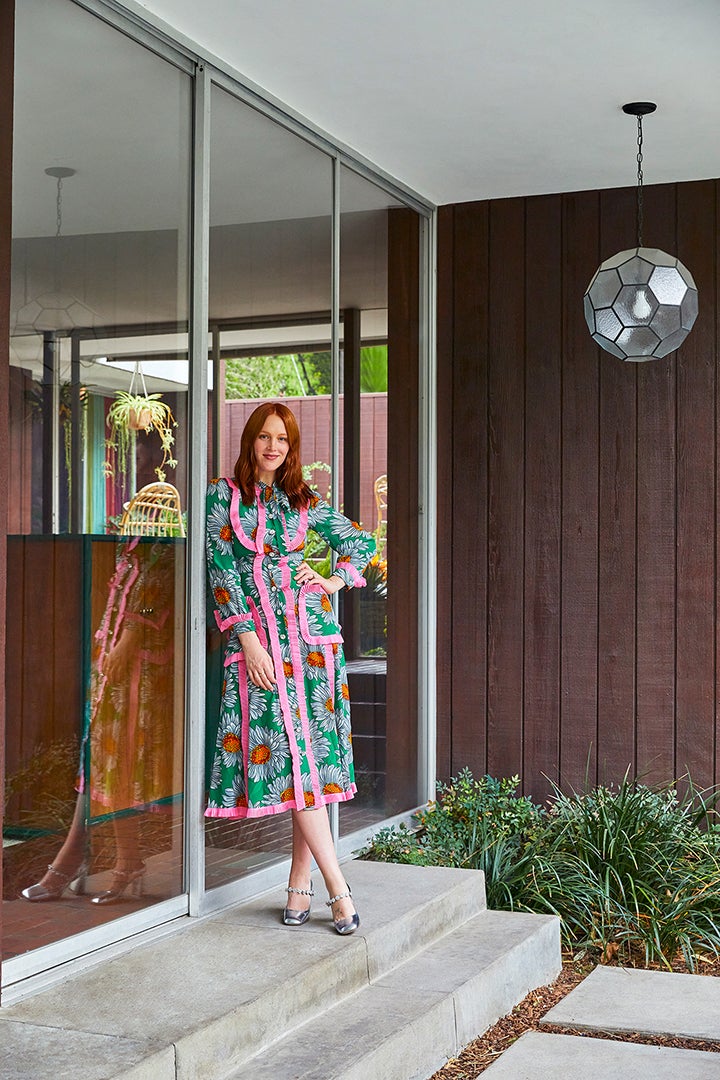 Brynn Jones trades in nostalgia for a living—the Los Angeles–based former model is the owner of Aralda Vintage clothing boutique—and she attributes her affinity for all things throwback to her family. “According to my parents, I’ve been obsessed with the ’60s and ’70s since I was a kid. But they were antiquers, so I definitely picked that up from them,”she explains. Recognizing the potential in a piece of cast-off clothing is what Jones does best, so when she first set foot in the 1963 Robert Lee–designed three-bedroom she now calls home, she could easily look past some of the previous owner’s questionable decor decisions.“I immediately fell in love,”she says. Her then boyfriend, now husband, Ness Saban, an indie film distributor, took more convincing. “I told him, ‘You have to take everything you see out of here and imagine what we could do,’” she recalls.“The house had great bones but it lacked personality,” confirms Frances Merrill, interiors virtuoso and owner of L.A.’s Reath Design, whom Jones brought on to help punch up the property’s dated details. Everyone agreed the immaculately preserved dark wood paneling and brickwork found throughout were absolute keepers—“They make the space feel so warm and cozy,” adds Jones—but the kitchen and bathrooms, the subjects of bad remodels from the ’90s, needed to be completely gutted.

Jones curated a renovation mood board filled with chromatically confident interiors and heady patterns reflective of her love of vintage fashion—old photos from the homes of Gloria Vanderbilt, Diana Vreeland, and Diane von Furstenberg, and ’60s-and ’70s-era design magazines. Merrill was all in:“Brynn really encouraged us to lean into unusual color combinations.”

The first update was simple but transformative.“Everything was painted a very light, institutional gray when we bought the house, which wasn’t doing it any favors,” Jones explains. To solve this, they recast many of the common spaces, original built-ins, and doors in emerald. “The rich green really ties the existing paneling and brick together,” says Merrill. At the other end of the spectrum, the kitchen’s glossy tiled backsplash in ultra-bright chartreuse might seem like a tricky hue to integrate, but it plays surprisingly well with the walnut and cream cabinets and dark wood. The master bathroom was another opportunity for out-of-the-box color experiments: light purple, burgundy, and scarlet tiles arranged checkerboard-style; a peachy marble countertop intersected with rose (“It reminded me of something from my grandma’s house,” says Jones); and purple marble lining the shower. The overall effect is pretty intense, admits Jones, adding with a laugh, “One of our friends says it feels like a Stanley Kubrick movie in there.”

If it wasn’t color that Jones and Merrill decided to push the envelope with, it was patterns—and the wilder the better. Like the office’s visual lodestar: a botanical Hermès wallpaper that serves as a psychedelic backdrop for the highly functional custom desk and wall unit crafted by local wood-worker Joshua West Smith. In the master bedroom, the mind-bending effect gets amplified. Instead of fighting the lack of natural light, the couple embraced a moodier vibe. Jones was so taken with a kaleidoscopic House of Hackney design that it became the window drapes, bedding, and wall-paper—which, in a stroke of rule-breaking brilliance, she decided to extend right up to the ceiling. “All the prints surrounding us could be really chaotic, but the colors are very calming,” says Jones, noting olive green and dark teal as an example. “Ness says it’s like he’s inside a wrapped present, but inverted.”

The couple really got playful in the last phase of the renovation project, which was timed to the arrival of their now 6-month-old son, Odin. “I wanted his nursery to be stimulating and charming, but not totally feel like you’re in a kid’s room,” explains Jones. The result: a daybed couch reupholstered in dinosaur fabric; baby bedding sewn from an assortment of mismatched Liberty London textiles; a dusty blue sky mural by Londubh Studios dotted with clouds and painted on the cabinetry and ceiling; and a plush custom carpet—over a purple linoleum floor, no less—designed to resemble a coral reef. “It’s like a spongy shag rug that got a haircut,” Jones adds.

The room’s pièce de résistance, though, is a personalized glider. “We decided to get the most giant, comfy one possible and force it to look cool,”says Merrill, citing Pee-wee Herman’s Chairry and Roy McMakin as her sources of inspiration. To up the edginess, Merrill took all the vintage fabric scraps that Jones had scored on Etsy over the years and brought them to an upholsterer. “I was going to have someone make a quilt, but then Frances said,‘What if we make this chair into a quilt?’” Jones shares. The delightful, cartoonish impact of the room easily evokes that sense of whimsy the new mom was after. “The imagination is a place to retreat to as a kid, and I wanted a space that nurtured that,” adds Jones. A design credo that, while born in the nursery, resonates throughout the home.