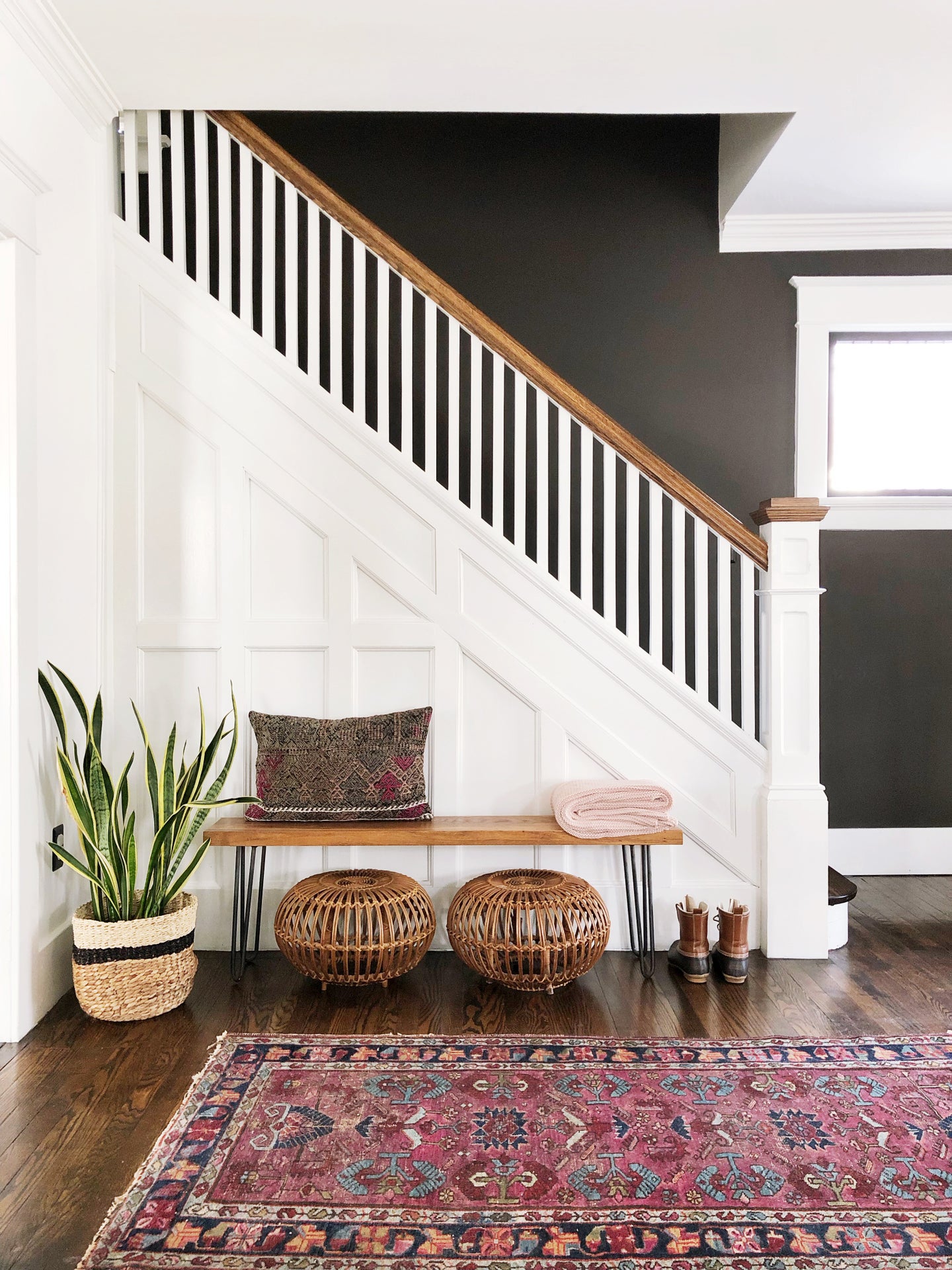 Between hidden fees and major delays, fixer-uppers are no small feat. That didn’t stop designer Whitney Utesch from purchasing one of her own. The designer recently tackled some major renovations inside her 1920s Indiana abode, and one of the most jaw-dropping transformations? Her entryway, now a boho oasis. For her, it was important that it capture the same vibe of the rest of the home, even if that meant painting over hardwood, ripping up the carpeting herself, or becoming her own general contractor to save major money. After one and a half years spent remodeling her home, it is safe to say that the designer is a fixer-upper wizard. Here, she shares some of her top tips on the art of the DIY entrance.

Stick to the same palette

Picking the shade for the accent wall was one of the easiest parts of Utesch’s renovation. Her trick to narrowing down the choice? Staying within the same color family. “Picking the dark accent wall required very little thought. At the time, the living room walls were a greige color, so I just went with the darkest hue on that same color chip,” she says.

Be realistic about what you can do yourself

“Quite honestly, the thought of hiring someone to pull up carpet seemed like a huge waste of money since that job in particular takes zero skill,” says Utesch. Taking things a step further, the designer also refinished the original oak floors herself, using a dark walnut stain. While the renovation pro maintains that it’s super easy to DIY your own floors, she notes that it’s a time consuming endeavor, so plan ahead.

Be conscious about your lifestyle

Utesch was well aware of the foot traffic—or more specifically, hand traffic—that her staircase would receive. “I decided to leave the wood finish on the railing since there would be a lot of grubby hands touching it and I didn’t want the white to constantly look dirty,” she notes.

Don’t worry about what others will think

Utesch painted over the woodwork, taking it from an orangey stain to a bright white, and doesn’t regret it one bit—though others had a different opinion. “I receive many harsh words from people on social media when they see the before picture,” she says. But the designer finds beauty in the makeover, especially since the architectural detail were kept intact. The lesson: When undergoing a large-scale remodel, stick to what feels right for you. After all, you’re the one who has to live there.

Bobby Berk Shares a Sneak Peek of His Latest Before and After Before and After: Tour a Kitchen That Hadn’t Been Updated Since the ’60s A Wow-Worthy Kitchen Transformation Plays Up Unexpected Color