From dated to modern farmhouse. 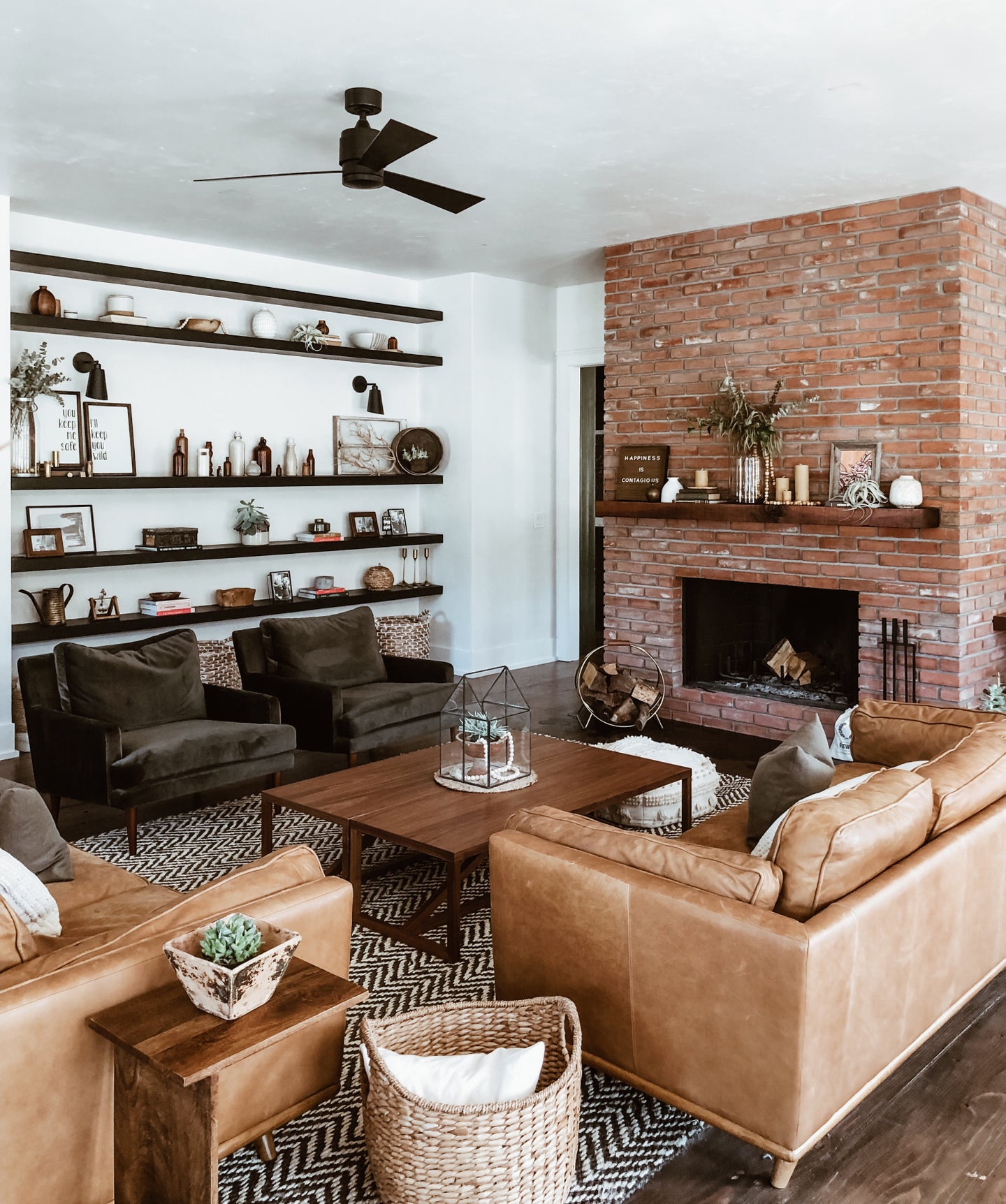 It turns out you don’t need a full-blown renovation to give your fireplace a little TLC. Just let California-based Tamlyn Willard’s living room serve as the necessary motivation to get started. The mom of two completely overhauled her previously dated family room, and the final product is nothing short of inspirational.

Situated on a farm in Corral de Tierra, California, Willard’s home is a fixer-upper she and her husband purchased with the express intent of renovating. The house had great bones and amazing potential, but according to Willard, it came with pretty bad finishes—the retro fireplace mantel being one of them. Aiming to create the feel of a 100-year-old farmhouse in a 30-year-old home, she got to work on renovating the space. Today, the finished space looks eons removed from the original room and perfectly encapsulates a modern farmhouse vibe.

Ahead, Willard shares her top remodeling survival tips with us. If you’re up for the challenge, you’ll want to take note.

Be Prepared to Temporarily Move Elsewhere

While the floors were being gutted, the family resided in an Airstream on their property. Willard, her husband, and their 10-year-old twin boys live on a farm with cows, chickens, and giant gardens, so going far wasn’t an option, but using the renovation as an excuse to test out a different living space was a fun opportunity nonetheless.

Save Money in Unexpected Places

Willard sourced a lot of materials without the aid of her contractor. For example, the reclaimed brick on the fireplace was found on Craigslist for far less than the cost of purchasing it at a hardware store. The flooring turned out to be the biggest steal: “We took raw redwood planks, air dried them on our front porch, and then nailed and glued them in,” she told Domino. “Our contractor had never seen this done before and was really worried, but I knew it would be perfect,” recalls Willard.

Change Your Mind, But Do It Quickly

After she came up with a renovation plan, Willard made two major changes to the original design. Initially, the fireplace was going to be painted white, but along the way, she came across beautiful old salvaged bricks that she could not imagine painting over.

Another shift in her strategy was the flooring: “The floors were originally going to be painted white, and then black, but I realized that I would never be able to keep them remotely clean, so instead, we did a black transparent stain over the raw wood to achieve the look we were going for,” says Willard. She recommends keeping an open mind during the renovation process, but ensure to make any major changes early on to catch the contractor before orders have been placed.

Don’t Be Afraid to DIY

The black hexagon tile design in front of the fireplace was a complete risk. At first fearful about tackling the project herself, Willard ended up being beyond pleased with the outcome. Once the wood flooring was set, she spent a few hours laying out the tile design, snapped a few pictures, and traced the design onto paper. From there, she used it as a template to cut through the wood floors. Now, the tiling is all the more special because she created it herself.

Willard scooped up their wooden mantel shelf from a salvage yard. She found the 100-year-old piece of walnut tossed out, raw, and unfinished. At $300, it was a major steal. “After a few hours of sanding and sealing it up, it was good to go!” she says.

“Be okay with knowing that it will take time to curate the final look, and even then, it will be a never-ending process,” says Willard. “In such an online world, it’s easy to become frustrated with the process when you see other people’s homes perfectly pulled together.” The truth is, sourcing decor pieces that feel personal takes time. Don’t rush the finishing touches, and you’ll end up with a mantel that is intentionally curated and really embodies the style you want.