7 Before and After Kitchen Makeovers You Can’t Miss

These transformations are mind-blowing. 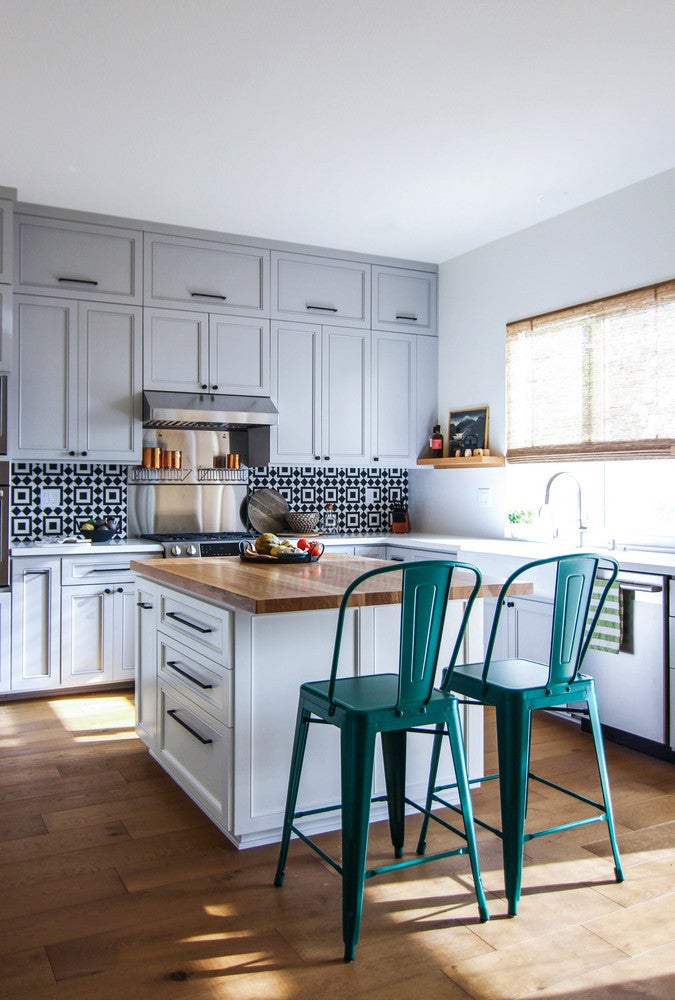 The heart of the home is arguably the kitchen. It’s a hub for family gatherings and the social epicenter where we gather to eat, cook, and entertain. Regardless of its square footage, the kitchen should be an area that is both stylish, functional, and welcoming. And when a home’s epicenter isn’t inspired, nothing will do but a total makeover. If you are stuck in a design rut without a clear direction, allow these stunning tiny kitchen before-and-after makeovers to help you get started on the road to renovation.

Not only did this kitchen have outdated black granite counters, laminate floors, barely-white cabinets, and “yellowing Swiss Coffee” walls, but the placement of the island kept the family from being able to use the space to entertain.

With the island repositioned and reduced in size to allow for more walking, the kitchen is more functional and allows for additional seating. The cabinets were upgraded to a blueish gray shaker style and extended 10 inches for extra storage space, and a tile backsplash was added, along with low-maintenance quartz and butcher block countertops.

This small space was cramped and void of some much-needed color.

By tearing down two walls and combining the kitchen, dining room, and living area into one open space, this kitchen gained an additional counter thanks to the free-standing island. Dark blue cabinets and gold hardware give the space a stylishly modern feel.

See the complete transformation on The Vintage Rug Shop.

This brown and yellow-toned mid-century kitchen was in desperate need of an upgrade. The homeowners took sledgehammers to their old kitchen and prepared it for a complete reno.

This major makeover proves that sometimes, a fresh start is the best way to go. The new kitchen is brighter, full of character, and has an added island for extra seating and counter space.

Get the scoop on the makeover on Design*Sponge.

Situated in Portland, Oregon, the kitchen inside this 1930s cottage home was a bit behind times. To say the least. With its mint green frames, white and wood crusted cabinet, and speckled linoleum floor tiles, it undoubtedly deserved a major revamp.

We can hardly believe the space is the same! The duo behind the remodel were in need of additional cooking space – being foodie bloggers and all. Getting rid of the eating nook at the end of the kitchen, the couple extended the kitchen and brought in a vintage gas range to sit at the end. Reclaimed wooden shelves contributed a rustic element to the now monochromatic space, while the industrialized farmhouse sink further accentuated the dynamic feel of the space

The sliding doors were replaced with the windows behind the range!

Get the scoop on the reno on Apartment Therapy.

Dark hues aren’t doing this tiny kitchen any favors. It looks as though the floorplan was poorly addressed initially, requiring appliances to just fit in wherever.

To start things off, designer

took to the cabinets with an un-pigmented semi gloss paint. Calcutta marble subway tiles complemented the similar make of the countertops, lending an additional source of a subdued pattern to the room. In addition to the recessed lighting, a trio of glass, globe pendants were installed to provide extra sources of light. With a whitewashed revamp, this kitchen was instantly ushered into a modern point!

See the rest of this kitchen on Cup of Jo.

Perhaps less makeover and more start-from-scratch overhaul, this kitchen space received a whole new frame, from the ground up.

To say that we are infatuated with this kitchen would be a serious understatement. From the delicate pops of color to the subdued metallic accents effortless scattered about the room, this kitchen’s whitewashed take on modern minimalism is simply perfect.

Get the scoop on the complete makeover on L’Appartement Living.

The outdated framework of this 1960s kitchen was more or less overshadowed by the dingy wallpaper and off-white palette that extended along the floor and ceiling.

The stark white refresh could not have turned out better! With a streamlined composition, the contemporary remodel resulted in one unbelievable transformation. Blue-front cabinets add a pop of color to the all-white space while the sleek silver hardware evoke an essence of refined elegance. Clean cut countertops and an intricately tiled marble backsplash complete the look.

Get the complete tour on Style at Home.

This story was originally published on April 21, 2017. It has been updated with new information.

See more kitchen inspo: A 1930s Fixer-Upper Gets A Much-Needed Makeover Breathtaking Kitchens We Wish Were Ours The Next Big Kitchen Trends to Watch For