Think beyond marble or quartz. 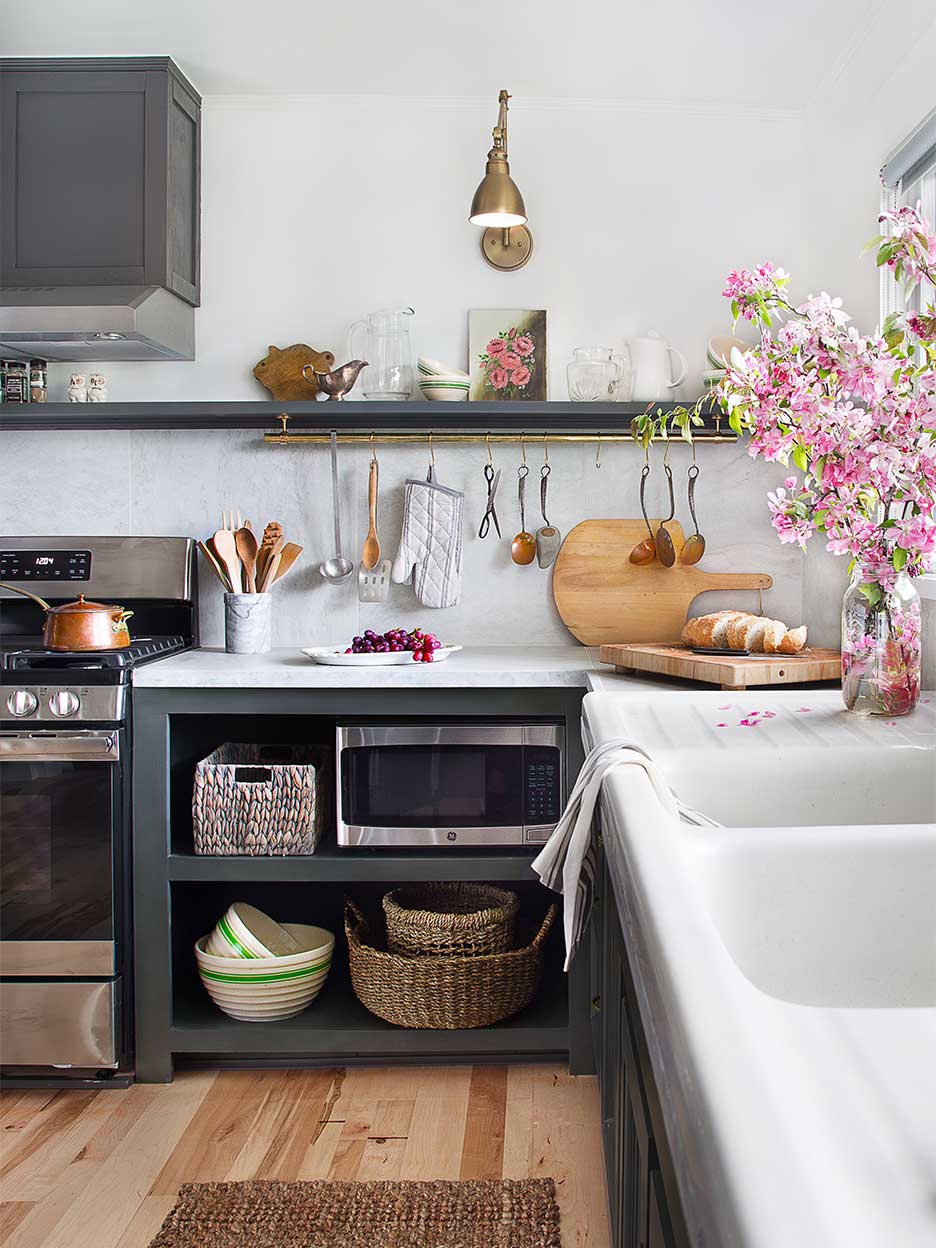 A little demon door knocker with tiny red lightbulbs for eyes stared at Joanne Palmisano the first time she visited her client’s potential new home in Stowe, Vermont. “It was my third project with him, and he didn’t want to buy anything that wouldn’t have my seal of approval,” says the designer. She had to look past more tacky gothic features—bloodred carpet, wrought-iron chandeliers—to see the potential in turning this house into an inviting vacation rental for visiting skiers, but it was there.

“It had some nice woodwork and great views, so I said, ‘Okay, let’s do it. Let’s keep the old-world charm, just not the scary version of it,’” remembers Palmisano. With the reno involving adding an upstairs bathroom and a deck outside, only $15,000 was left to update the kitchen, including stocking it with every last fork, pot, and pan. Palmisano—being an expert on all things DIY and salvaging materials (she’s written four books on the topic)—ripped out the bad linoleum to turn the space into a room worthy of a ski chalet in the Alps.

Palmisano was set on opening up the ground floor. “The house sleeps 12,” she says. “I wanted to have that European country eat-in-kitchen feel, in which the table is in the middle of the room.” But the wall that separated the kitchen from the formal dining room was structural, so she couldn’t knock the entire thing down. Instead of having an expensive steel support put into the ceiling, she nudged the fridge to the right a few feet and built a box around it to conceal the load-bearing beam. A simple picnic-style table, built by the contractor and painted green, catches the eye in the center of the room without hurting the budget.

The majority of the cabinets couldn’t be salvaged, save for the ones that line the sink wall. To cut costs, Palmisano installed open shelves (another contractor creation) and painted everything a peppercorn gray, even the shelf that lines the backsplash, which is a simple 2-by-6 from Home Depot.

Marble or quartz countertops were completely out of the question, but Palmisano faked the look using 2-by-2-foot porcelain tiles (found in the discount section of a tile shop for $200 total) on a sheet of plywood. She sponge-painted the edges to match the stone effect and, to make the surface functional, had the tiles placed as close together as possible with waterproof epoxy instead of standard grout. “It almost disappears,” she says. Brass rods (totaling $100) from Signature Hardware hung underneath the shelves house coffee mugs and cooking tools while elevating the simpler materials.

Palmisano wrote the book on designing with salvaged materials (literally), so she made good use of them when it came time to source fixtures. She had spotted a double sink at Mason Brothers Architectural Salvage Yard and knew she wanted to use it here. Rather than pay for it the usual way, she exchanged a few things that were getting demoed out of the house: kitchen cabinets, moldings, and, yes, that devil door knocker. “The sink was essentially free,” says the designer. “I feel very strongly about recycling and donating whatever we can to keep as much out of the landfills as possible.”

The floors were another lucky find: After realizing that the red carpeting was covering old plywood floors, Palmisano called a local lumberyard to see if it had any planks it was trying to get rid of or liquidate. She landed on character maple that needed a quick sand—and was about $2,500 less than engineered floors. Even the plates and cutlery were the result of a handful of trips to the local Salvation Army. It goes to show that one person’s trash is another person’s dinner party setting.