PSA: Your kitchen doesn't have to be white to feel bright and airy. 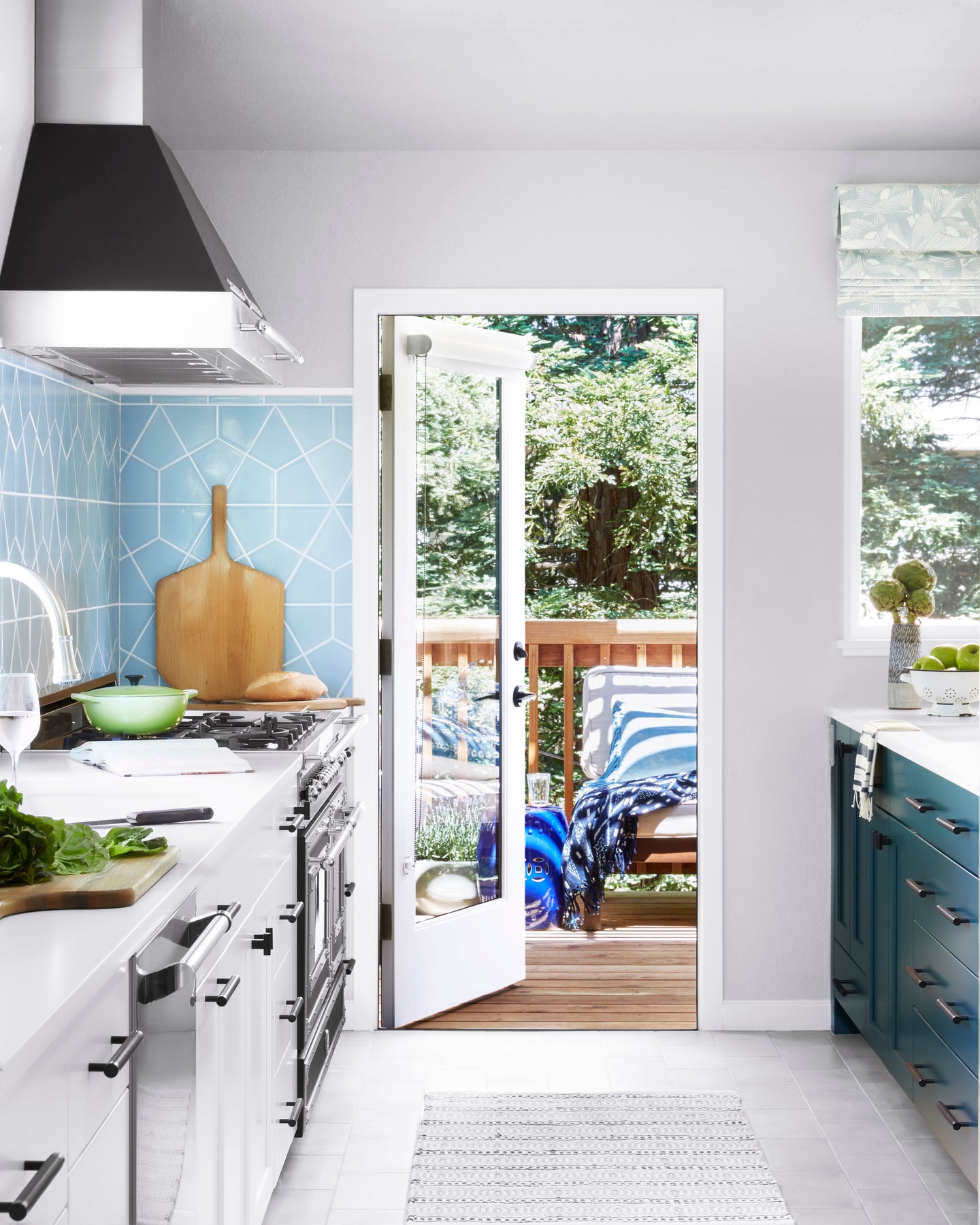 For designers, the most personal projects aren’t the ones they do for themselves, but rather the ones they do for family. This was certainly the case for Orlando Soria, who you probably already know either from his own inspired spaces, or from his stint as Emily Henderson’s assistant on her former HGTV show, “Secrets From a Stylist.” As a retirement gift for his parents, Soria recently completed an all-encompassing kitchen renovation that entailed a colorful facelift and complete change of scenery.

“I grew up in Yosemite National Park and my parents moved to Sonoma County five years ago. It’s an expensive area, so they had a hard time finding a house that they really wanted and ended up buying a home that was basically perfect except for the fact that it had a minuscule kitchen,” Soria tells Domino.

To turn his parents’ dream kitchen into a reality, the designer worked closely with Italian kitchen brand Bertazzoni. Harkening back to the appliance purveyor’s original cookers, Soria set the tone for the remodel with a jet black range from the company’s Heritage line. Now matched by splashes of playful blues and geometric motifs, the color-fueled cookhouse is a dreamy (and spacious) spot to host holiday feasts and casual family get-togethers.

Formerly tucked within the darkness of a cramped, L-shaped nook, the kitchen used to be completely disconnected from the adjacent living area. By expanding the footprint onto the exterior deck, Soria was effectively able to double the size of the kitchen. Although tearing down an entire corner of the house just to make room for a functioning layout is easier said than done, once the new bones were in place, the kitchen was finally proportionate to the rest of the home.

“The primary desire was to have more space to move around in, as well as more storage,” shares Soria. “My parents tend to be the ones who host family holidays so they also wanted a kitchen where people could be cooking and cleaning and it wouldn’t feel like you were jammed in there.”

Despite its current bright and airy state, Soria faced his fair share of budget setbacks (the cost doubled by the time the project was actually complete) and timeline delays along the way. “It took almost a year to complete,” adds the designer. “My parents were out of their kitchen from August, 2017 to May, 2018—that’s a long time. Everything that could have been delayed was delayed.”

Before committing to a bold color scheme, Soria reveals that he was actually contemplating going with an exclusively white palette. “I originally wanted to do white, so in case my parents decided to sell their house, they could do so,” admits the designer. Regardless, Soria soon came to the conclusion that neither he or his parents were willing to compromise personality for resale value. “I think that’s why so many people do white, honestly. There’s this concern that if you do something too specific, people might not be able to envision themselves in the space. But the idea to do color really came from my mom. She loves blue and wanted to do something more distinctive.”

With its dark exterior, traditional composition, and striking chrome details, Soria used the black Bertazzoni range as the initial jumping off point for the rest of the decorative elements and metals in the space. “I knew it was going to be the focal point of the room—that one dark moment. Knowing there was going to be this big, beautiful object in the room, I wanted to add some softness to it.”

The aqua-blue Fireclay backsplash and peacock-colored peninsula served up the right dose of warmth and personality. When it came to the overall scheme and palette for the space, Soria was especially conscious about choosing timeless shapes and classic shades that would age with grace.

“For the tile, I was looking for something distinctive, but not necessarily trendy. It does have a really graphic sense about it, but it’s a very fundamental pattern of triangles and hexagons. It won’t look like it’s dated 10 years from now,” says the designer.

While the kitchen’s expanded layout naturally offered more space for storage, the designer was careful not to forget the importance of proportion. “I think the number one thing that people get wrong when they design kitchens is not knowing that appliances should be to scale,” Soria explains. Although the 48” range and 36” refrigerator (both courtesy of Bertazzoni) fit his parent’s space perfectly, the same sized appliances would look off in Soria’s own tiny West Hollywood kitchen.

His rule of thumb for designing kitchens: “They make small appliances for a reason.” There are plenty of ways to maximize your cooking space—and compromising cabinet and drawer storage for giant appliances is not one of them.

Despite various blows to the budget and serious deadline delays, Soria was able to give his parents the last piece to their forever home puzzle—and also got to learn some pretty cool kitchen facts along the way. “I looked at this as a fun research project,” shares the designer. “I actually got to go to the Bertazzoni factory to take a tour and see how these appliances are made, the Cambria factory to learn how their counter tops are made, and Fireclay to see how each tile is handmade.”

As for the overwhelming transformation, Soria shares that it’s totally changed the way his parents feel about their entire house (not just the kitchen/living room). “They’re really proud of it now. The room gets a ton of use because it’s a lot easier for my mom to feed grandkids at that counter. It’s where everyone hangs out now. It’s completely changed the way they interact with their home.”