One couple made the best of supply chain woes. 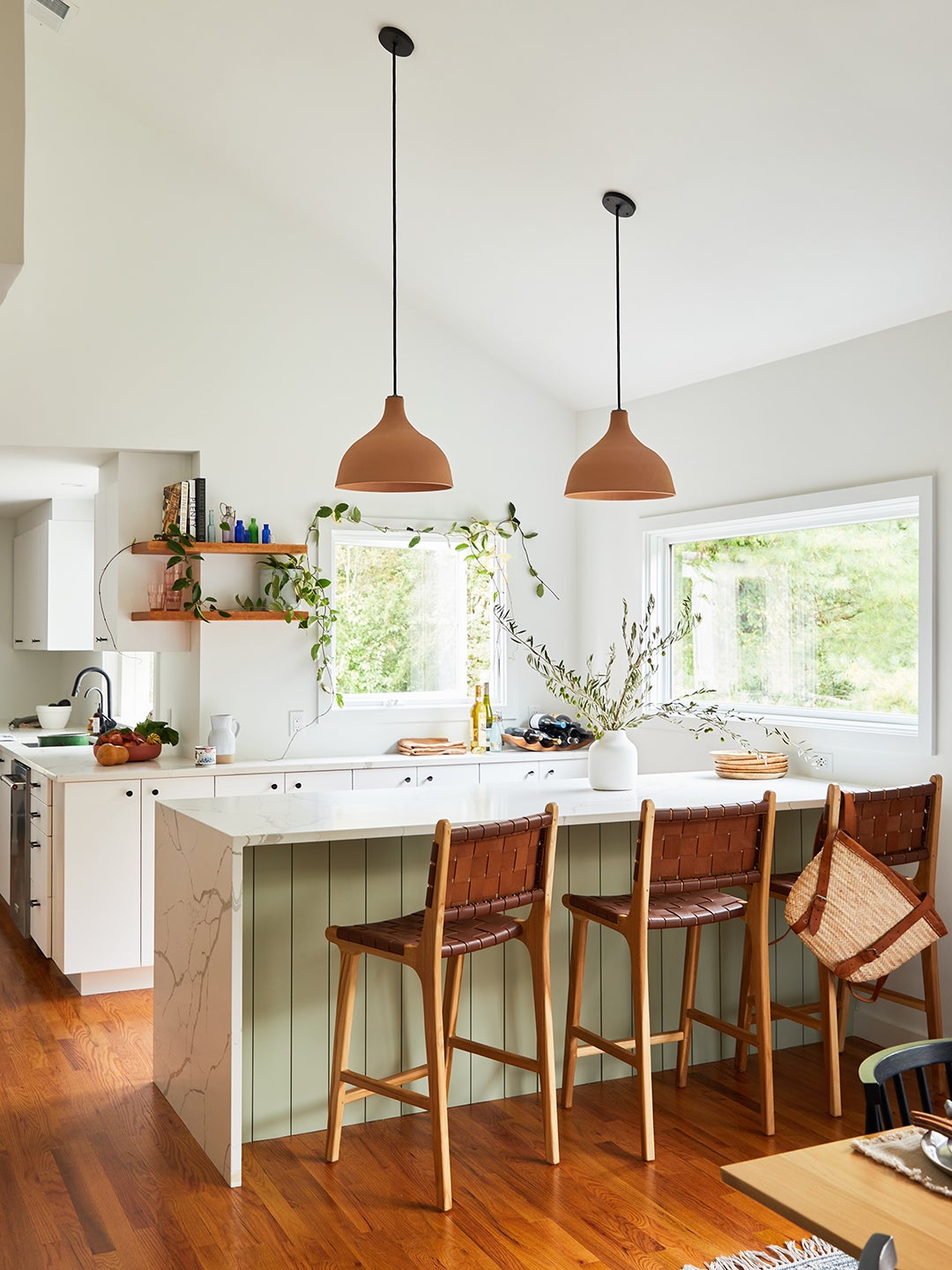 When Ali Pugliese, vice president of merchandising strategy for Fresh Direct, and her husband, architect Joe DiGiorgio, were both called back into their offices mid-pandemic, the couple made a point to keep one of their quarantine traditions alive: family dinner—every weeknight at 6 p.m.—with their two kids. “Even if it means me hustling home from work at 4:30,” says Pugliese. “It’s important to us.” It’s an easy routine to stick to when you get to come home to your dream kitchen every day. The couple recently renovated their Mt. Kisco, New York, house, and turned what was formerly a dark space with knotty wood cabinets and fluorescent lighting into an open and airy retreat.

“I had high hopes for this home,” DiGiorgio recalls of touring the off-market property for the first time with their real-estate agent this summer. He looked beyond the kitchen’s less than ideal galley layout and saw an opportunity for space. In full architect mode, DiGiorgio went snooping around upstairs for crawl spaces and discovered that they would be able to raise the ceiling in the kitchen and make one large, dramatic room that opened up to the living area. “We wanted a natural, warm, open environment for our kids, who are still little,” says Pugliese. “It ended up being the perfect house for us.” Dining in has never looked better.

Find a Compromise With COVID Delays

Since they were living at home with two young children throughout the reno, DiGiorgio and Pugliese didn’t want to wait out the long 12-week lead times for custom cabinets (or even IKEA ones, for that matter, which were backed up). So they put in an order with BOXI by Semihandmade. The company’s Salt Slab cupboards arrived in under eight weeks and were partially pieced together when they showed up, so it took less than two days to fully assemble them.

Still, DiGiorgio and Pugliese couldn’t avoid supply chain issues altogether. “I call this our ‘install kitchen,’ because we went with what was probably our fourth choice of hardware,” says Pugliese. Ultimately, they opted for Fold knobs and pulls, both in matte black, from Crate & Barrel. The upside is hardware is a low-lift and affordable thing to switch up down the road.

What Goes Up Can Come Down

The pair turned what was previously an empty corner off the kitchen (the previous owners had a dining table there) into a built-in bar area that now comfortably seats three. The only concern was having enough walking-around room between the eat-in peninsula and the window. So rather than stick traditional lower cabinets below the countertops, DiGiorgio and Pugliese bought extra upper cabinets from BOXI (they’re shallower!) and mounted them on the ground. The hacked cupboards are situated on pedestals so they are the same height as the rest of the lower kitchen cabinets.

While there’s now an adult-approved wine fridge in the nook, the setup ended up being kid-friendly, too. The couple outfitted the lower cabinets with their children’s kitchen items (cups, plates, water bottles, etc.). “It’s nice that they can access those things on their own,” says Pugliese. “It helps make our hectic life a little bit easier.”

Make Coming and Going a Breeze

The pair thought outside the box once again when creating more storage in the nearby laundry-slash-mudroom: The bench by the door is actually an upper cabinet flipped on its side so it can hold shoes while also holding the person who is putting on their shoes.

While there is no door that separates the hardworking area from the cooking zone, a small wall blocks the front-loading washer and dryer from view of the kitchen. The couple topped the appliances with the same white quartz used for the kitchen countertops to offer a bonus surface area for folding clothes.

Good Lighting Is Sometimes Everything

One of the biggest splurges were the two Rejuvenation pendant lights above the peninsula, which Pugliese originally discovered through an Instagram ad. “The algorithm really gets me,” she says with a laugh. The fixtures are made out of two clay halves, which are joined on a wheel, trimmed, and hand-finished to bring out the warm terracotta tones. Still, the space “was starting to feel a little cool and sterile,” she says, so while on a trip to visit his family in Ohio, DiGiorgio snagged a solid slab of red oak from his contractor father’s collection and turned it into open shelving.

Their biggest piece of kitchen renovation advice? Save your project for the summertime if you can. “That way you can grill outside,” says Pugliese. “I had a Top Chef–worthy craft kitchen going on with hot plates and a little air fryer, but grilling was a huge relief.”