Can you spot the old dishwasher panel’s new home? 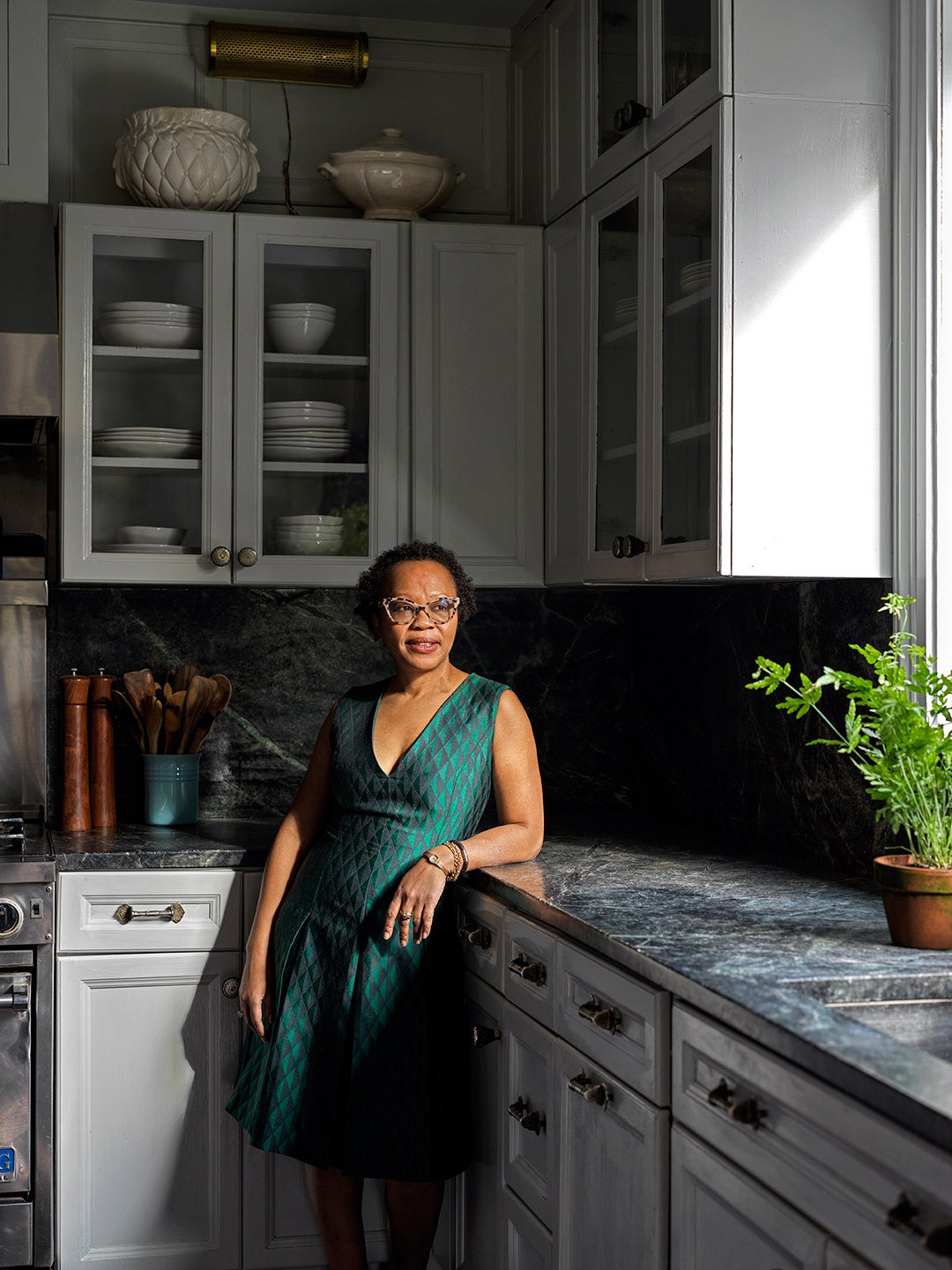 Designer Maryline Damour’s latest client happened to be her partner of 10 years, Fred Drake. “This was his house that I moved into, so I really wanted him to have the final say, more or less,” says Damour. The couple, who are also business partners (they run the building firm Damour Drake), now live together in Saugerties, New York. When Damour moved into Drake’s home upstate, which he had built from the ground up, the layout of the kitchen was pretty much in place (the appliances were there and he was getting by, storage-wise, with a few freestanding IKEA cabinets), but “it was all very makeshift,” recalls Damour.

Drake’s top request was a classic farmhouse-style space (think: inky black counters, a pine butcher block island, and subway tile backsplash). But because relationships are all about compromise, Damour decided to do a riff on the rustic aesthetic and infuse a bit of her personal style, too. The main countertops, for instance, are soapstone, but the surface has hints of bronze tones in it; the island is wood, but it’s a rich walnut. “You get that feeling of elegance,” the designer says of making these small tweaks. Ahead, she walks us through the design and shares some of the smart decisions they made along the way, starting with saving big on the cabinets.

Someone Else’s Cabinets Are Your Treasure

To achieve that farmhouse vibe, Damour wanted the cabinetry to almost look like furniture. As luck would have it, she found the cupboards she was looking for at Big Reuse in Brooklyn. The deeply discounted cabinets were secondhand (they were previously in another kitchen that was nearly twice the size), so Damour had to reconfigure the boxes in a way that made sense for their U-shape layout, like stacking the ones with glass fronts. Once everything was in place, she painted them in Benjamin Moore’s Stonington Gray.

Still, though, Damour was left with one too many door parts. But they came in handy: “When Fred built this kitchen, the plumbing for the island turned out to be off-center from the stove, which drives me insane,” she says with a laugh. “What I wound up doing is using the extra doors as paneling around the range hood so it draws your eye away from the island sink.” Psst: The large piece directly above the hood is actually a panel designed to go on the side of a dishwasher.

Out in the Open

As a former chef (Damour used to run her own catering company), she also knew that having some element of open storage would be key. “Having your cooking utensils and implements out is efficient; you don’t have to waste time looking for them,” she explains. For hard-to-store, frequently used cutting boards and baking sheets, the designer squeezed two boxes on the far-left wall, one beneath the countertop and the other next to the upper cabinet.

Damour’s Dutch ovens, pitches, and other bulkier cookware and serving tools also live in plain sight on the custom island. The structure was brought to life by her colleague Mel Jones Jr., who fabricated the piece in just three days. “It’s also where we perch and have a quick bite at the end of the day,” says Damour of her decision to incorporate seating.

A Window (Er, Door) of Opportunity

To maximize the view of the garden outside, Drake came up with the idea to turn a 4-by-7-foot sliding glass door on its side. The stationary panel was exponentially cheaper than having a large window custom-designed and shipped (he picked this one up at Door Jamb in Shokan, New York). “He hates to waste anything,” says Damour. “The more you use stuff, the more creative you get.”

Damour convinced Drake to embrace the concrete subflooring (he initially poured it with the intention of laying wood boards or stone tile over the top of it). “I told him that we were never going to get this house done if he kept going backward—this flooring is beautiful. It looks done, everybody thinks it’s done,” she says. Sticking with the cooling material was as much a win for their wallets as it was the timeline.

A Pantry With a View

When Damour designed a room for the annual Kingston Design Showhouse earlier this year, she wrapped the walls in a dreamy hand-painted wallpaper from Flavor Paper that’s meant to transport guests somewhere far away. Fortunately, she had a large panel left over from the project, which now lives in her own pantry. (The great thing about the treatment is that it is easy to wipe down with a sponge and some water if any food gets on it.) “Through the kitchen sink window, you can see the pink and purple butterfly bushes in the summer, so you get that same imagery reflected back at you in here,” she says. Everything comes full circle.