Thanks in part to a particularly beautiful stone slab. 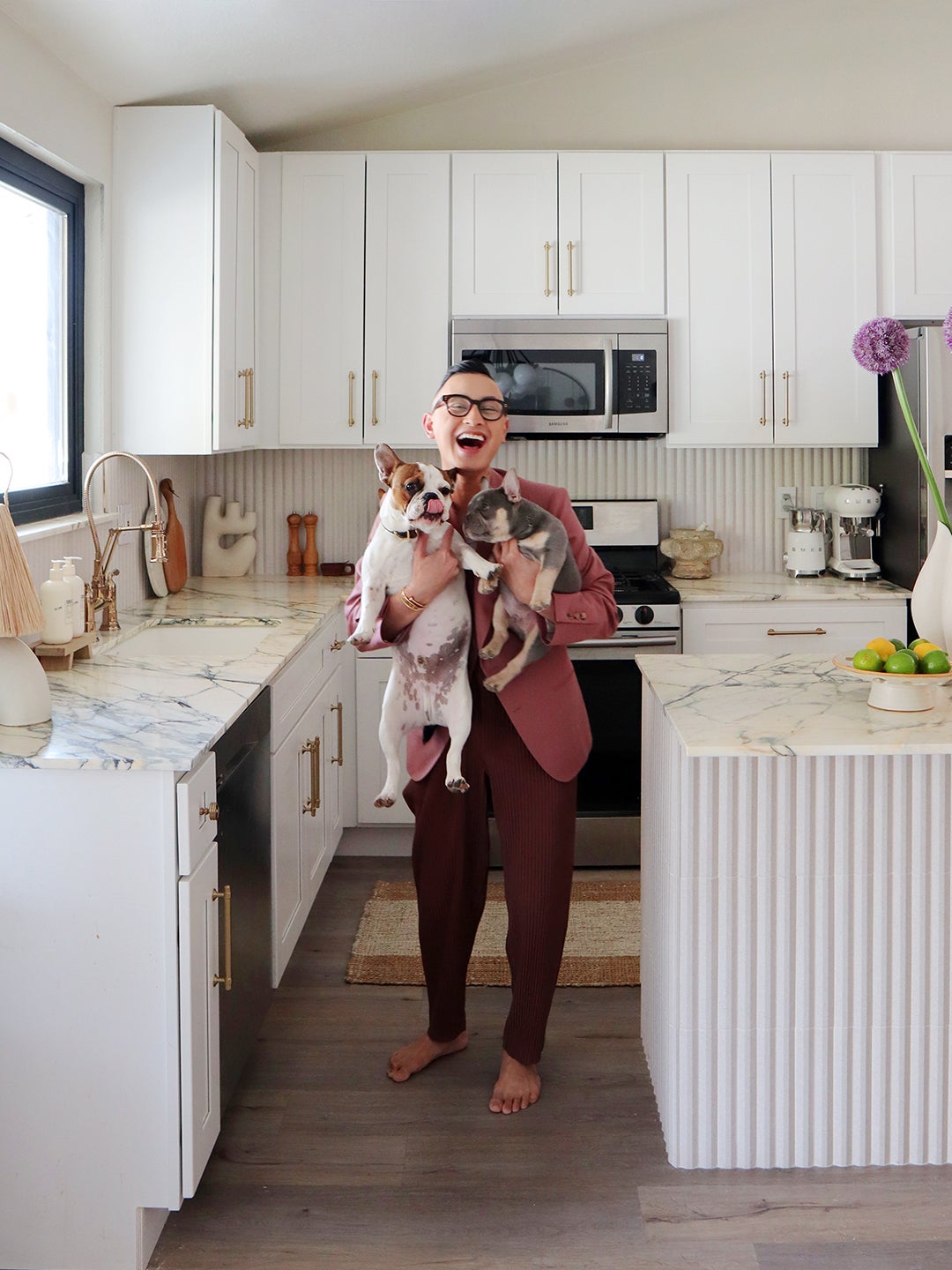 When design content creator Arvin Olano and his partner, Andrew, closed on their first place in Las Vegas two years ago, they were immediately taken by its airy appeal. “Our home isn’t large—I’d say it’s like 1,400 square feet—but the ceilings are 15 feet tall, and they make the whole space so bright and light that it almost feels like it’s a photo studio,” says Olano. “I walked in, saw those, and I was done.”

Less love at first sight, however, were the builder-grade finishes, courtesy of a quick flip done on the ’80s home before the duo bought the three-bedroom property. While the kitchen certainly couldn’t be described as offensive, it lacked personality and didn’t jibe well with Olano (who formerly worked in fashion for Gucci) and engineer Andrew’s aesthetic, which Olano, a self-proclaimed tchotchke lover, describes as “soft minimalism with eclectic tendencies.” 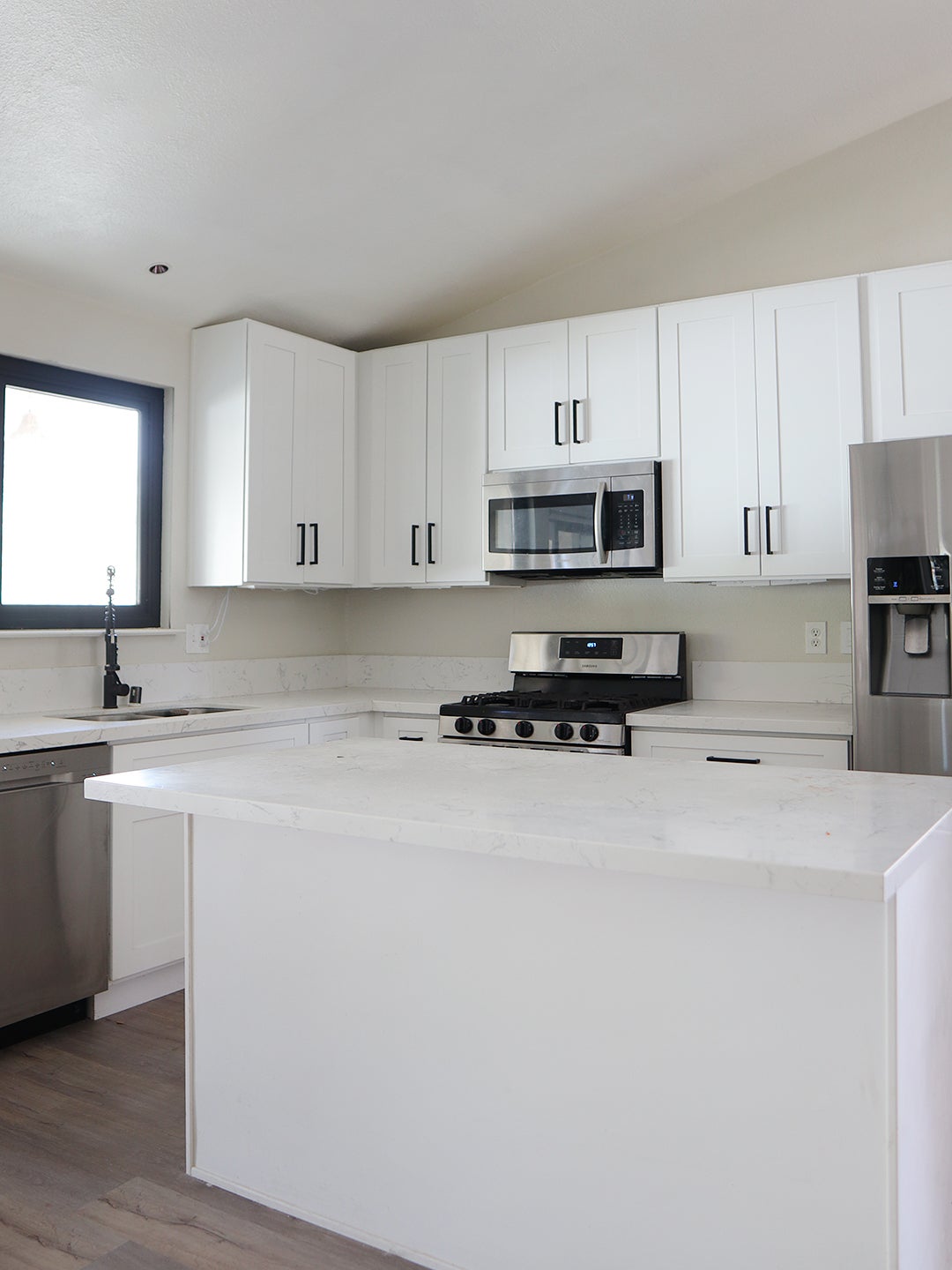 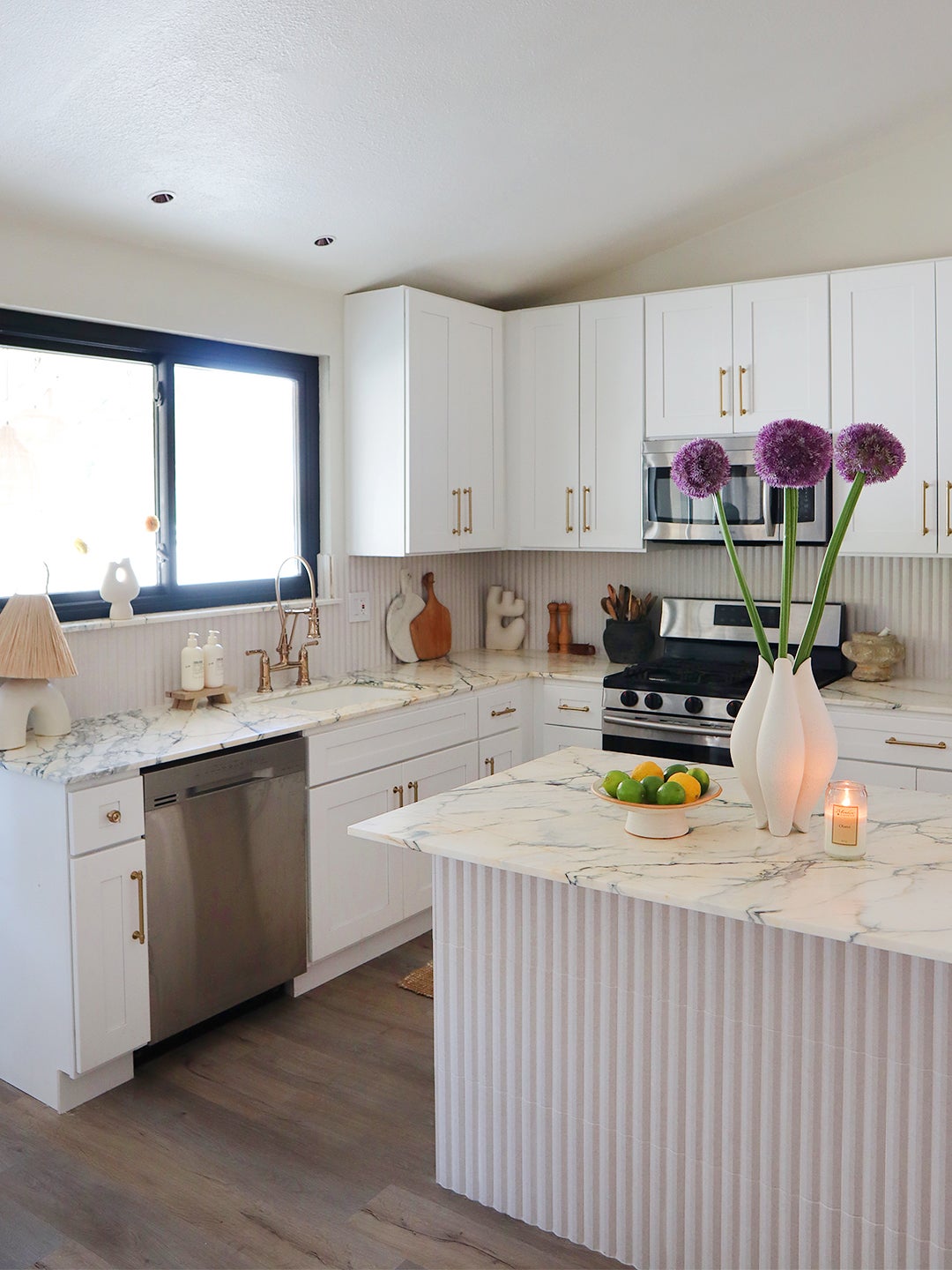 “I always felt like the kitchen was never a space I enjoyed,” says Olano. “It sucked, because I start my day in the kitchen making my tea or coffee, and Andrew and I end it together with dinner. I wanted it to be a room we wanted to be in.”

To help invigorate the bland space—but keep their renovation budget around $10,000—the pair eschewed the typical glitz and glam found in Vegas properties and opted instead for smart, high-impact upgrades, partnering with a local showroom, European Bath Kitchen Tile & Stone. Olano looked to faves like Athena Calderone, Nate Berkus, and Norm Architects—as well as traditional British kitchens—to inform his tone-on-tone design scheme. “European designers in general are always so ahead of the curve, doing things that America won’t see until a year later,” he points out.

The end result: a clean, bright space that effortlessly toes the line between trend-driven and timeless. The best part? Now the pair jump to entertain friends and family for dinner—and it’s their French bulldogs’ favorite place to hang, too.

Swap All the Small Details

For Olano, painting the cabinets (often the first order of business for many kitchen renos) was never in the cards. “The prices we got quoted were insane—and Lord, don’t make me do any DIYs because I will ruin it,” he says, laughing. He focused on more nuanced changes instead, like trading the quartz countertops for a marble with lots of movement (Calacatta Paonazzo, which he found on sale). “I have this fascination with Italian marble, and you just can’t fake the color and veining you get from natural stone,” notes Olano. “This slab ended up being the catalyst for the whole project.”

From there, he leveled up the rest of the finishes, outfitting the sink with a stunner faucet by Brizo and swapping the black cabinet pulls for a warmer, brushed-bronze style from Top Knobs.

Be Ready to Pivot 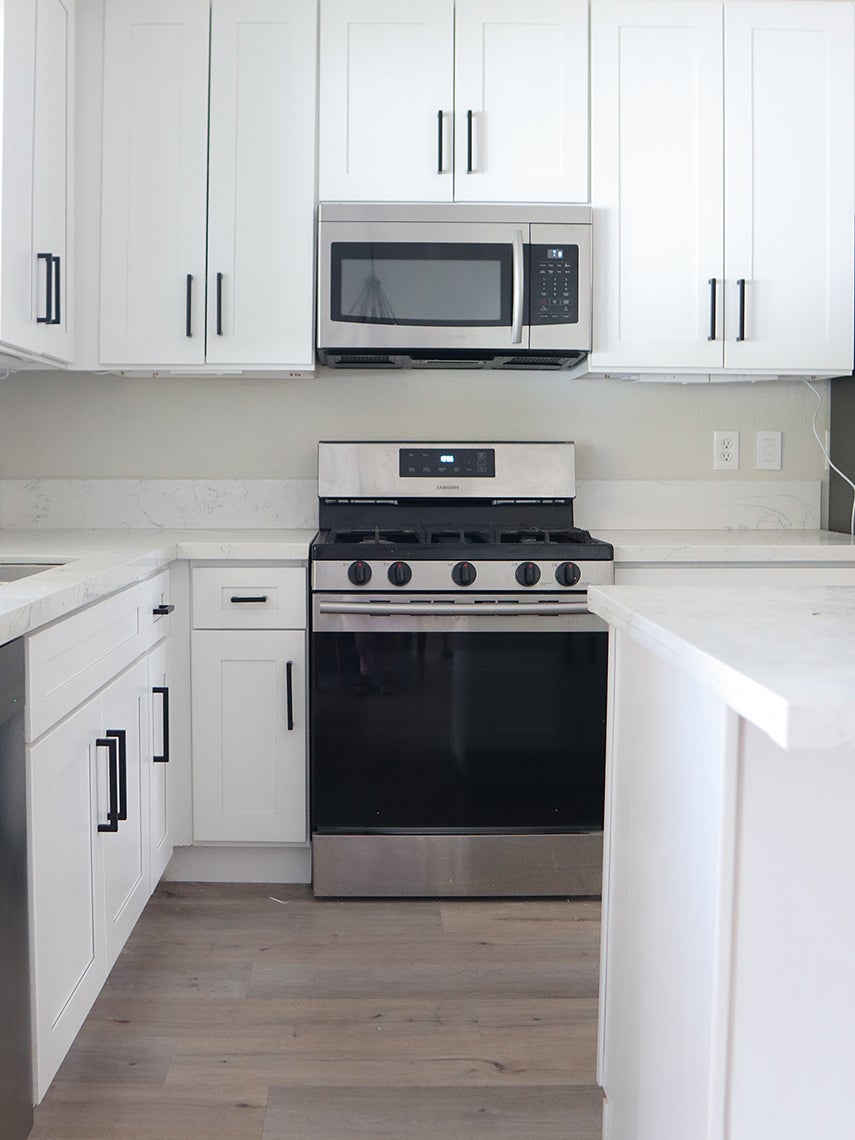 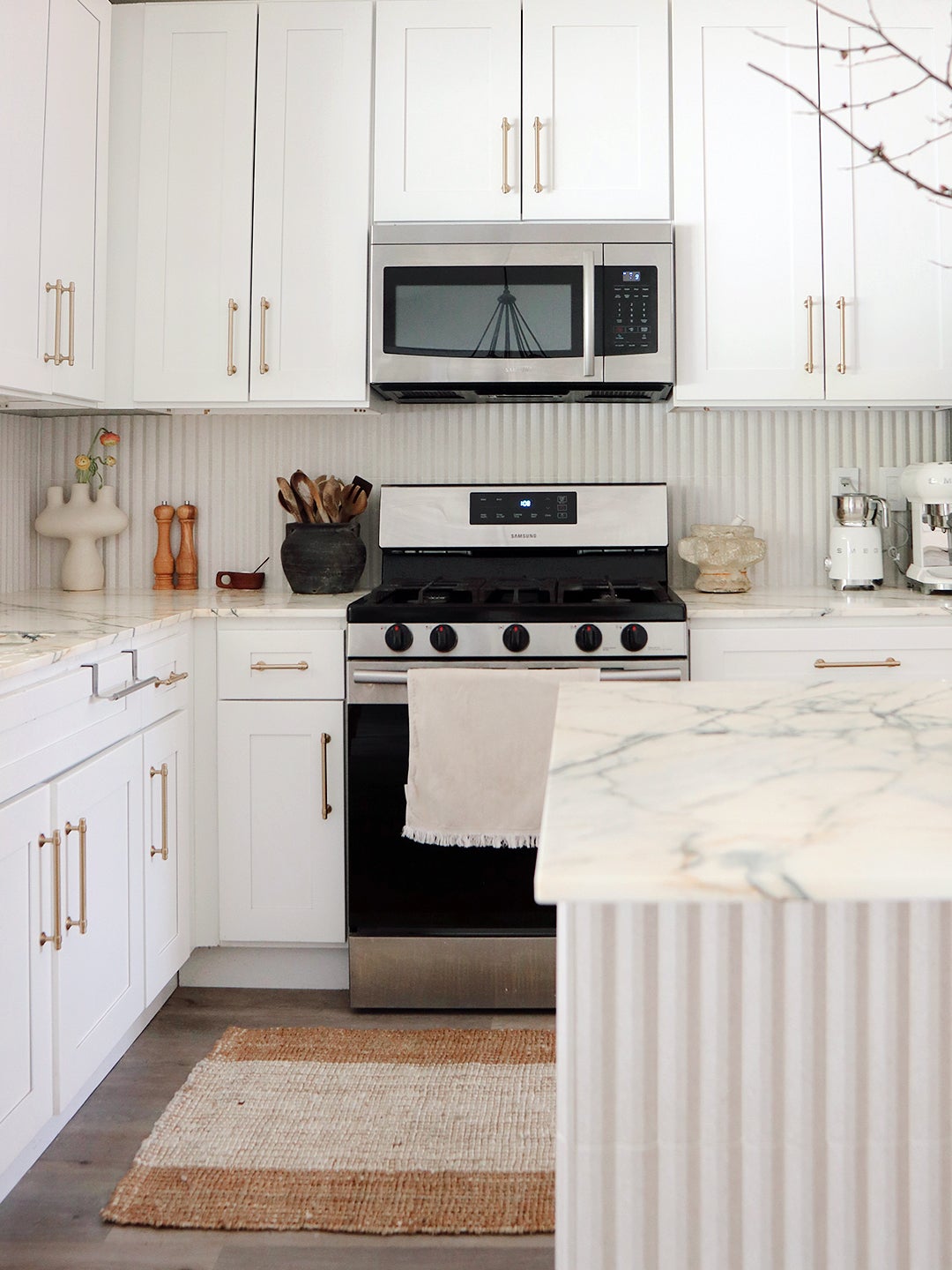 At first Olano had plans to carry the eye-catching marble up the backsplash for one seamless surface. Then he got a disappointing phone call—after they’d already purchased the slab. “I was so focused on getting this marble that I didn’t measure the backsplash,” admits Olano. “So when they said, ‘You don’t have enough to do a backsplash, sir,’ I about fell to the floor!” Swallowing a hefty restock fee wasn’t in the cards, so Olano improvised, choosing an unglazed cream tile backsplash that allowed him to play with the fluted texture he’d seen (and loved) in European kitchens. The accident ended up being a happy one—Olano loved it so much that he then added tile to the base of the island, as well.

“Just because your kitchen is a utilitarian space doesn’t mean it can’t be pretty,” says Olano. Raw-wood cutting boards; antique vessels; and curvy, form-forward ceramic vases dot the countertops, and they’re not just for looks. Some pieces house must-have accessories like wooden cooking utensils, while others hold fruit or fresh-cut flowers. Etsy is his go-to: “I’ll start with a keyword or phrase—let’s say ancient Turkish mortar—and that will bring me to a bunch of different listings. I’ll pay attention to the ones where I like the color or shape and see what keywords they use in the listing to keep informing my search.”

Hide Your Appliances in Plain Sight

“A lot of people go crazy ripping out microwaves and putting in beautiful ranges,” says Olano. “I wasn’t looking to spend money doing that.” He had to get creative to blend the current not-so-stylish built-in microwave and fridge into the space, namely with a clever color palette.

“The countertops pulled in the silvery gray of the stainless steel, and the gold veining coordinated with the brass pulls,” he explains. “Then the stone’s black details match back to the window frame and appliances—it ended up blending really nicely and creating this harmony.”