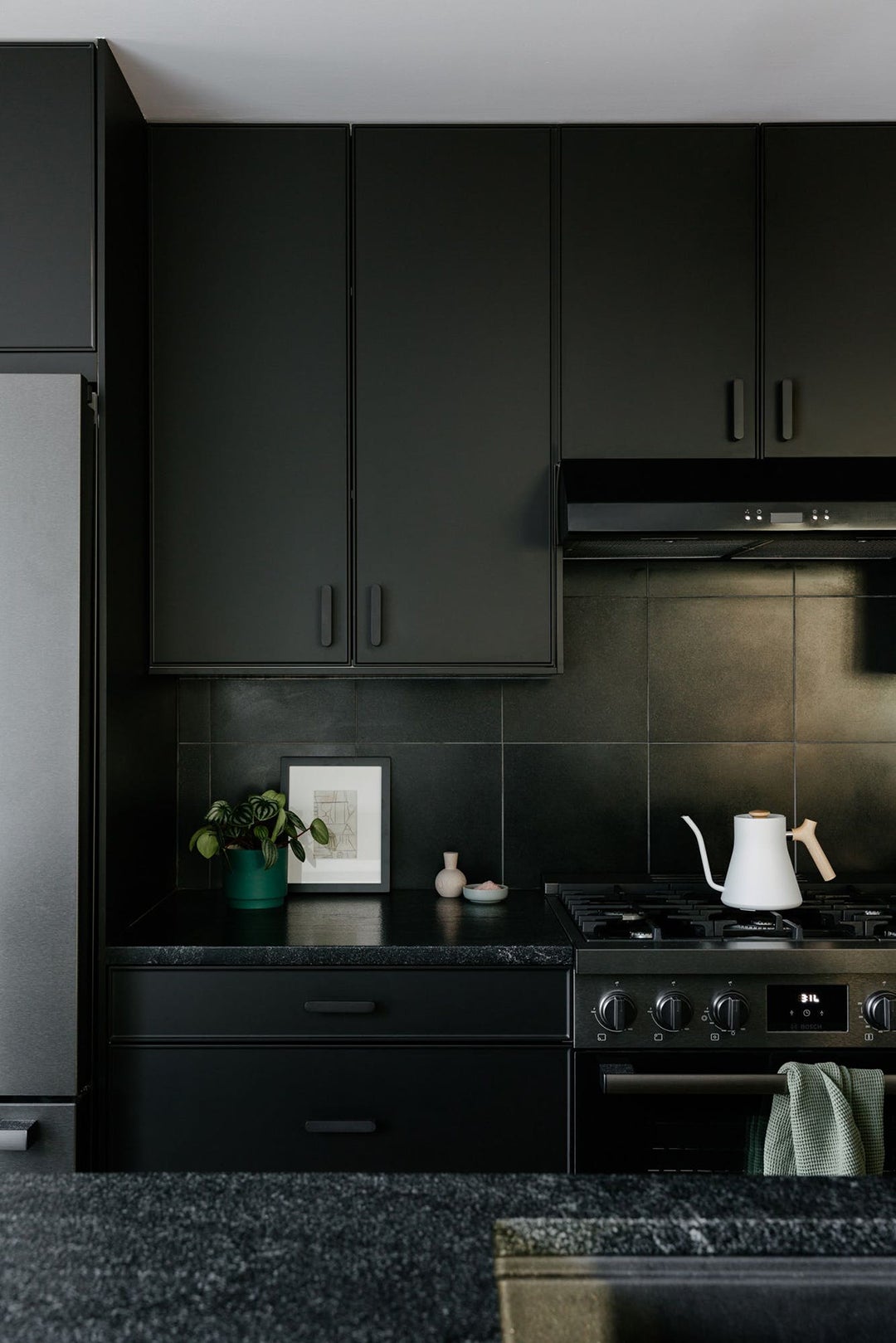 Editorial and fashion photographer Sebastian Kim never intended to renovate his South Williamsburg, Brooklyn, duplex. But a burst pipe changed all that. In April 2021, a massive flood took out seven apartments in his building, drenching the lower level of his home and damaging the floors in his upstairs kitchen. “There was water spewing even outside the building,” recalls Kim. Before the event, he had rented the place to tenants for a solid six years and eventually moved in with his own growing family. He even put the home on the market for a short period of time, but after a divorce and the serious water damage, he had an excuse to give the place a glow-up, starting with the dated red kitchen. So what would it cost? He had to do a lot of digging to find out.

“I have always dreaded renovation,” says Kim. “I was hearing from my friends who had gone through it about the headaches and how long everything takes; how expensive it gets.” Kim’s first step was to link up with a contractor, who introduced him to a local cabinetmaker. The initial quote for fresh millwork? $20,000. That’s when the photographer started perusing Instagram for semi-custom options and came across Block Renovation, a streamlined platform that does everything—from the planning to the installation—for you. When Kim went to the company for an estimate for his kitchen and three bathrooms, he got a $100,000 assessment (not including appliances). So he decided to keep looking.

“When you’re shopping for renovations, you’re flooded with all of these other Instagram ads for services,” says Kim. “Advertising usually doesn’t work on me, but it was helpful.” After a few more weeks of scrolling, he discovered Form Kitchens and Boxi by Semihandmade and set up interviews with both. The perk of these virtual services is you don’t have to wait for someone to come to your house and talk to you: You send them pictures and some measurements and they come back to you with a quote. While Form, which manufactures its products in Germany, estimated $20,000, U.S.-based Boxi came in at $9,000. Ding, ding, ding! Kim’s contractor approved of Boxi’s easy installation (the frames arrive partially prebuilt) and the fact that should any pieces be delivered damaged, Kim wouldn’t have to wait long to get a replacement.

In the end, the cabinets took two months to show up and cost slightly more than the original quote. The whole kitchen reno cost around $34,000 ($6,000 went toward installation). Peep the breakdown, below.

An elongated island and one tall cabinet was really all it took to maximize Kim’s space, which formerly felt cluttered with all the open shelving. “I didn’t want to see dishes and pots and pans,” he says. To minimize the mess, he opted for integrated trash and recycling bins within the new island structure, and deep drawers where he could stash essential cookware. Ultimately, the reno became an exercise in purging. Kim ditched his espresso machine and the extra blenders he never used.

“When you’re redoing everything, you realize you accumulate all this stuff and you don’t really need all that much,” he adds. The doors are topped with oil-rubbed bronze handles from Rejuvenation ($24 each).

Going with an Impala Black granite waterfall island was a natural decision. “Black is always a photographer’s color of choice,” notes Kim. He drives a black car, plus the hue felt suited for a “bachelor” apartment. Even though the stone was sourced from a local shop in Greenpoint, it came in just shy of $10,000. So instead of purchasing another slab for the backsplash (which would have added $4,000 to the total) as he originally intended, Kim sourced affordable, large-format square tiles from SMC Stone to give the illusion of a solid surface.

Kim splurged on all new Bosch appliances, including a matte black range that seamlessly blends in with the cabinets, counters, and backsplash. The monochromatic look was a big win in Kim’s 7-year-old daughter’s eyes. “She’s at that age where she’s rebelling against pink and purple, so she thinks the black is so cool,” he says with a laugh.