This Builder-Grade Kitchen’s Layout Went Unchanged, But These Tweaks Make It Look Custom

Cutting the counter bar made a big difference. 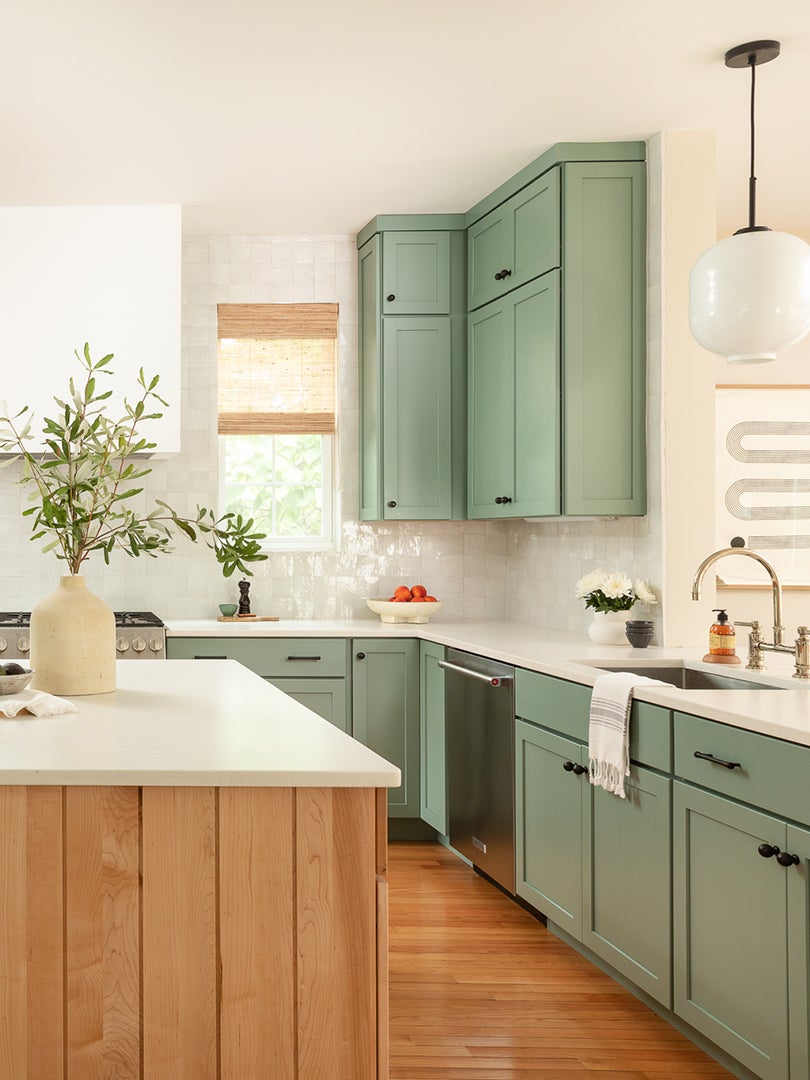 When Washington, D.C.–based designer Basma Masood laid eyes on her client’s tiny kitchen island, she could see the cost cutting done by the previous renovators. “An island that’s not properly sized throws off the overall feel of the room,” says Masood. Plus with no space for integrated trash cans, the homeowners were staring at their recycling while they ate at the peninsula. “The other thing that bothered me was how dark the cabinets were. They felt inexpensive,” adds the designer.

Given all these eyesores, you’d assume Masood would have demolished everything and started fresh, but she didn’t alter the footprint at all. (The biggest change she made was adding more tall cabinets next to the refrigerator, where there was once a shallow pantry closet.) “One of the biggest reasons we kept the layout was to keep the budget low,” says Masood. The designer pondered removing the peninsula bar entirely to potentially have a long island that extended into the dining room, but decided against it. Instead she made some small (but mighty) tweaks to the builder-grade space to make it feel custom.

Even Out the Breakfast Bar

The raised counter that stuck out beyond the peninsula was making the kitchen feel separated from the adjacent dining space, even though there wasn’t a full wall there. Lowering the surface minimized the visual divide and created a more seamless connection between the two eat-in areas. Plus going with a white quartz countertop brightened everything up. “It actually makes the kitchen feel bigger,” says Masood.

After doing a price comparison of how much it would cost to reface the existing cabinets and replace the boxes with new custom ones, Masood decided it’d be best to spend the few extra thousand dollars on fresh millwork. “The reason we ended up splurging was the original ones weren’t high quality,” she explains. “How the drawers glide…things like that matter.” Luckily they didn’t have to pay for a totally separate paint job—the sage green hue is one of the premade colors from the cabinet manufacturer, Local Cabinet Source.

Beef Up the Island

In the process of redoing the cupboards, Masood made the island structure larger and included hidden drawers for trash. To break up all the green paint in the room, she went with warm wood fronts and natural slatted siding.

Masood turned the range wall into a feature moment by scrapping the fussy upper cabinets and mounted microwave. (Now the small appliance lives in a tall cabinet, out of the way.) Drywalling around the vent hood rather than leaving it as stainless steel was also key to making the space look streamlined (the designer’s handy husband tackled the project, which helped keep labor costs down).

While the current homeowners had added trim around the windows on either side of the range, Masood convinced them to get rid of the detailing and take the new zellige backsplash from Riad Tile all the way up to the edges. “I wanted that whole wall to not have any extra distractions,” she says. Our focus has never been better.