On the Other Side of This Santa Barbara Kitchen’s Windows? Another Kitchen

Accordion doors for the win. 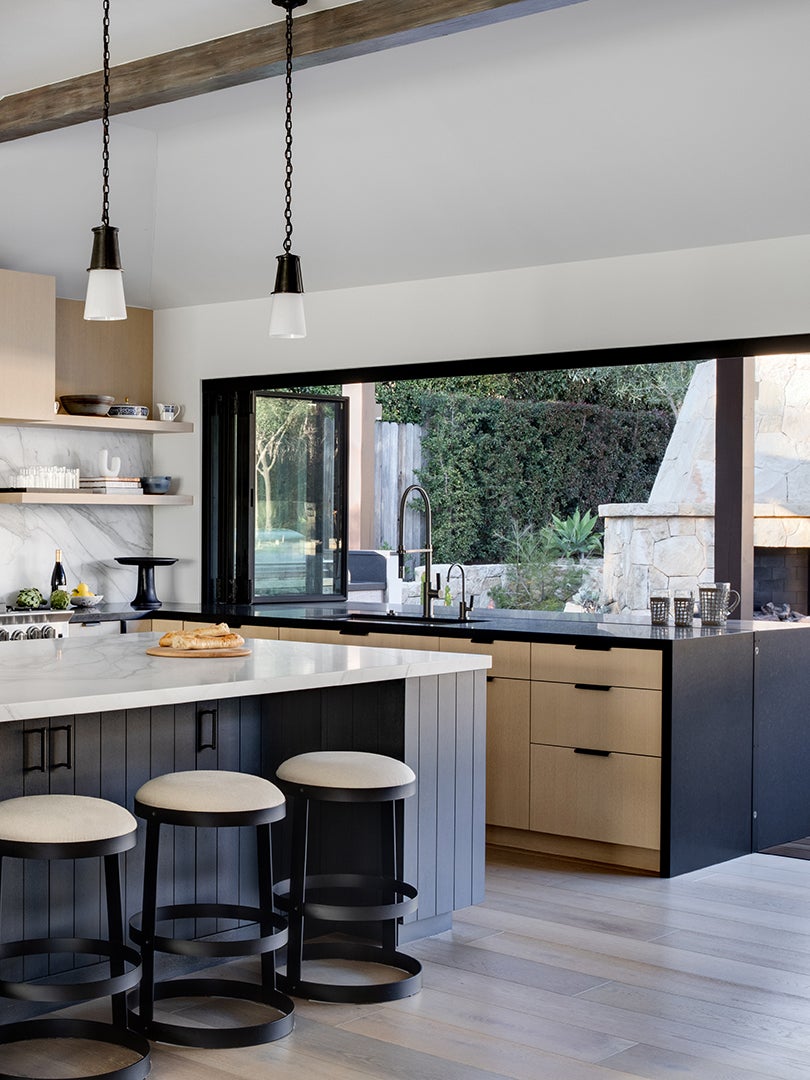 It was hard to picture anyone cooking in the kitchen of this Santa Barbara, California, home (let alone entertaining in it) before designer Jessica Risko Smith stepped into the picture. But with two college-age kids, the new homeowners needed to get a lot more use out of the space than just boiling water. “Everything became about the interconnectedness of the indoors and outdoors,” explains Smith. “And having the kids come home with friends from school.”

To take the kitchen from feeling “grandmother style,” as she describes it, to “young and fresh,” Smith worked closely with architect Joe Andrulaitis and contractor Will Hall to move it from its original location across the house, which called for reframing the roof to support the client’s big idea: an indoor kitchen that’s also an outdoor one. “We worked really closely to fine-tune all the connection points,” says Smith. “Because with a space that’s that open, you don’t want any stutter-stepping.”

A Window (and a Door!) Onto a New World

In two steps, the interior kitchen can become one with the outdoor cooking zone. Smith and the rest of the construction team had to be thoughtful when designing the point where the peninsula meets the accordion-style door. That’s the reason for transitioning the durable black honed granite into a waterfall edge: It disguises the metal seam. On top of the counter, an accordion window can be pushed in the opposite direction. The additional opening offers flexibility on days when the owners don’t feel like going through the effort of unraveling the door. “When you’re only home for a few hours, it can be a lot of work to open everything up,” notes Smith.

Between the sink, grill, and hardy redwood cabinets, the outdoor kitchen can meet almost all of the family’s cooking needs. To ensure people can spend hours out there, they installed a louvered roof overhead with motorized steel slats that can be positioned to block (or allow for more) sunlight, depending on the time of day. When things get cool on winter nights, the family can simply switch on the heaters underneath the covering.

Narrow In on Storage

Of course, inside the house, Smith was able to prioritize aesthetically pleasing materials over weatherproof ones. Cue the oak cabinetry (the island base is ebonized) and the Calacatta marble backsplash and countertop. Open shelves on either side of the range hood offer an opportunity to display the family’s collection of china along with new earthenware pieces, while an even shallower sliver of marble directly over the cooktop is the perfect perch for small spice and oil bottles. Any overflow dishes and cookware can be stowed away in the cabinets under the window seat in the adjacent living room. “Not everything has to be in the kitchen when it’s so open like this,” says the designer. “It’s more about, where will you use it? And putting things where they’re convenient to get to.”

Hide Away for a Moment

Next to the paneled refrigerator is an entire walk-in pantry, discreetly hidden behind a matching oakwood door. Originally, the 6-foot-deep bump-out was intended to disguise the exterior HVAC equipment from the view of the street, and so the designer took advantage of it with a workhorse of a space: There is a sink, wine storage, and a coffee maker there. “It lets the main kitchen be a little less busy and cluttered,” she says. It’s the second coolest party trick in the room.