A thoughtful reno honors the house’s architectural past. 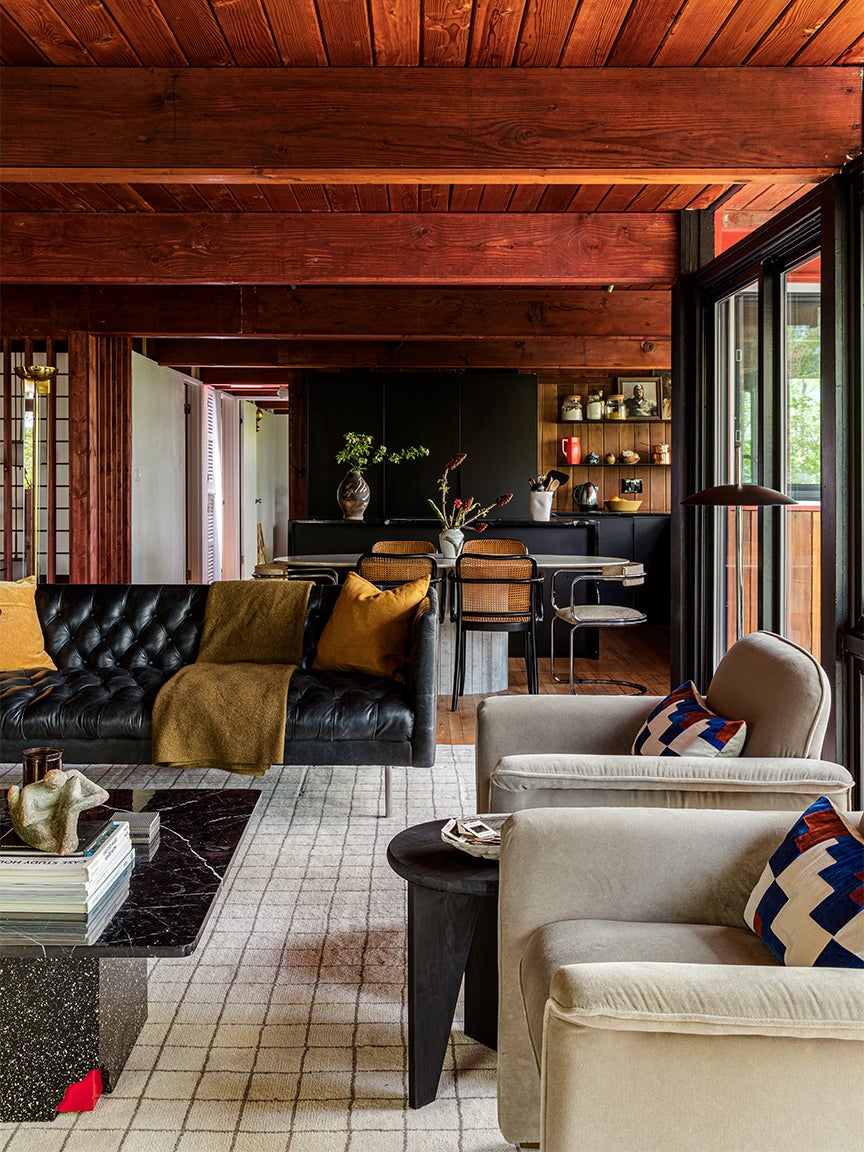 The first time Alex Fawcett made the trip to Northford, Connecticut, it felt like a scene from Nancy Meyers’s Baby Boom (his favorite movie growing up). “It was early fall, and the drive up from New York City was as picturesque as you’d expect New England to be,” he remembers. His extensive search for a quiet, mid-century weekend escape had taken him around upstate New York all the way to Pennsylvania’s Pocono Mountains. But it was a property in this village slightly outside of his desired area that was love at first sight.

“What initially caught my eye was the way the light filtered through the trees and bounced off the walls and floors,” says Fawcett, an interior designer and studio manager at Souda. He was immediately drawn to the post-and-beam style and the wood ceilings throughout. The sellers’ father, Cyril K. Smith, an architect who trained under Frank Lloyd Wright and Louis Kahn at Yale, built the Case Study house in 1956.

Fawcett made an offer that week. He wasn’t the highest bidder, but his good intentions landed him the keys—he had included a letter to Smith’s three daughters promising them to honor the building’s past. Working with limited funds, Fawcett renovated little by little, focusing on period-appropriate details and a modern Japanese aesthetic inspired by the home’s minimalist lines and lush landscaping. Here’s how he used his budget to give the structure a thoughtful facelift while bringing it into the 21st century.

Do Whatever It Takes to Open Up the Layout

The first order of business: Remove a few walls to update the kitchen and living area. “The hallway was too long and the division between the rooms was an eyesore,” remembers Fawcett. Little did he know, one of the main partitions was load bearing. “My heart sank a bit when I found out,” he says. Luckily, a special order of two 32’-by-12” beams from Home Depot, which he had installed in the middle of the living room, did the trick, allowing the space to be completely unobstructed.

The kitchen had been last renovated in the late 1970s, so it was ripe for a refresh. To save money, Fawcett decided to keep the sink and plumbing in their original places, refrain from switching the electric range to gas (which would have added an extra $15,000 to the bill), and opt for matte black cabinet doors from IKEA. But he had the handles professionally powder-coated, splurged on soapstone counters with a waterfall edge, and recessed the brand-new refrigerator and dishwasher behind cupboard doors to elevate everything. “The hidden appliances really make it feel less like a kitchen and more an extension of the living space,” he notes. “It’s very European.”

Frame the Views to Invite the Outdoors In

Continuing the black color scheme throughout, Fawcett replaced all the basic white window frames and expanded some of the openings to maximize the scenery outside. “This was one of the hardest decisions I had to make,” he says. “I knew it would be a painful process and an expensive one at that.” After getting quotes from at least six specialists, he landed on Pella’s line of fiberglass panes. “It was almost as pricey as the kitchen reno, but it was definitely worth it. It’s a dramatic transformation,” he notes.

Spruce Up the Original Flooring

Instead of ripping up the planks, Fawcett chose to refinish them himself, something he already had experience doing in his own childhood home. “It took me a week to sand them and an additional three days to do the edging all around the baseboard,” he explains. To give the hardwood a natural raw finish, he coated them with linseed epoxy from Waterlox. The elbow grease was well worth it. “I’m really happy with how they turned out and how low-maintenance they are,” says Fawcett.

The living room’s custom mahogany shelves, built by the architect, were a major selling point for Fawcett. The original Stony granite fireplace across the way, on the other hand, was covered up by a bulky insert. “I removed it because the hearth opening is massive and it really gives a lodge feel when the fire is blaring,” he says of the simple but striking update. “Now you can see it from the other end of the room.”

Look to the Landscape for Patio Inspiration

The wood house, built on the edge of a bluff overlooking the forest, was already surrounded by large expanses of pachysandra plants, which gave it a vaguely Japanese feel that lent the home its new name: Casa Yamagoya (a type of mountain hut). Over the past year, Fawcett has been busy adding stone walkways and planting shade-friendly shrubs and bushes. A back deck for summer dining was another must. “I enjoy creating spaces that people feel incredibly comfortable being in,” he says. “It’s trapping a moment in time, even if that moment is fleeting.”