Curved wood for the win. 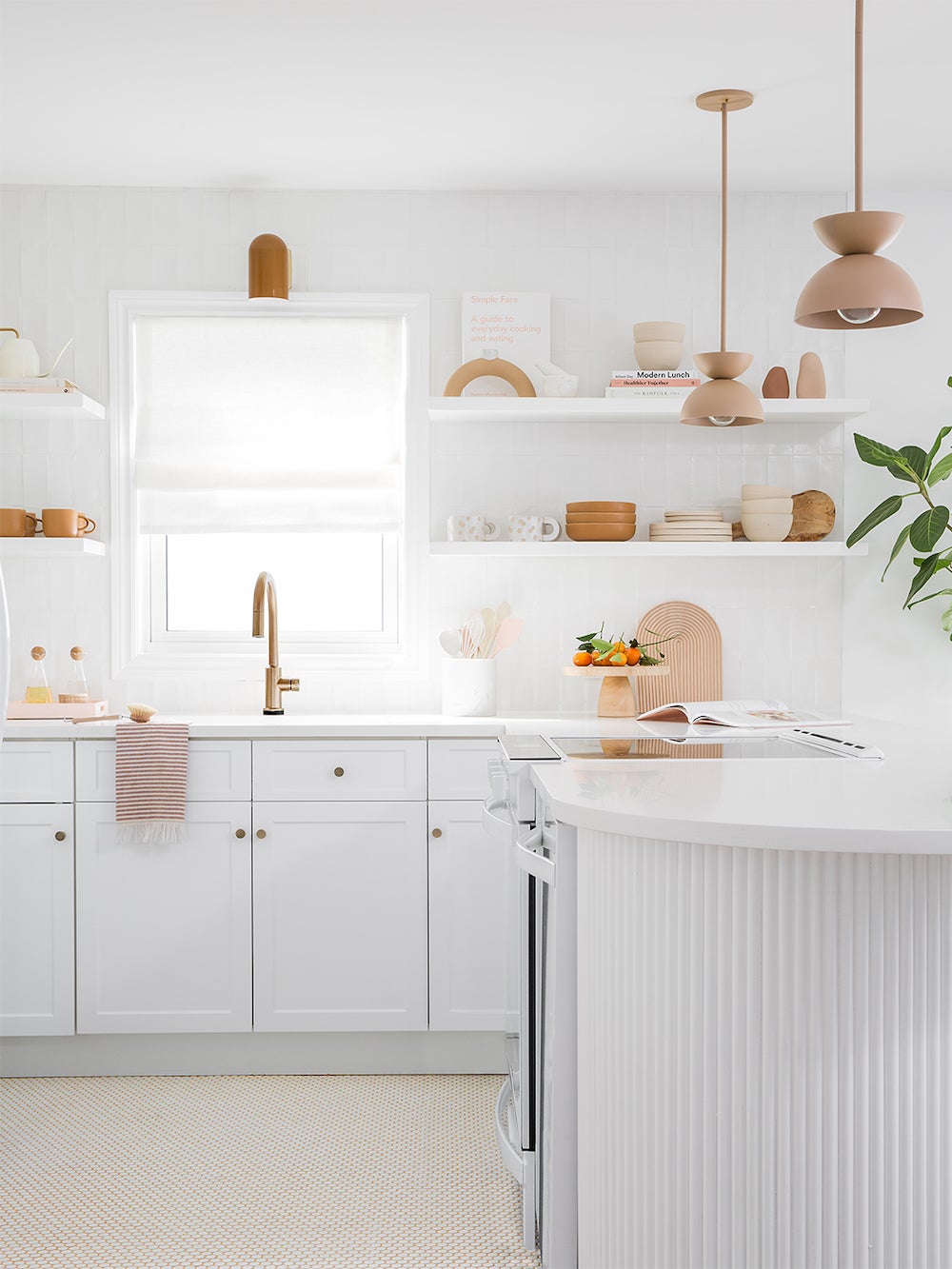 We can’t pinpoint the exact moment it happened, but somewhere along the way between open shelving and farm sinks, kitchen islands became the pinnacle of modern design. However, not every space has the square footage for one, and that’s where the peninsula comes in. These three-sided structures are ideal for small spaces and, more important, tight budgets. Cutting costs was the main reason designers Autumn Hachey and Tiffany Leigh decided not to demolish the lower cabinets in the Summer House, a boutique vacation rental located on the shores of Southampton, Ontario.

“It was a very builder-basic home from the ’90s with no personality,” recalls Hachey. To save money, the designers and owners, Cam and Hayley Stretch, opted to curve the end of the kitchen peninsula for a modern look. The refresh only cost around $400, thanks in part to Cam, who committed 16 hours to it. “It’s a tough weekend job with the painting and the number of pieces that were involved, but it’s totally worth it,” he says. The project requires some technical know-how (Cam had the advantage of consulting with his brother, who is a trained furniture-maker and woodworker), but it’s the bright idea that counts.

Cam created the rounded form for the tip of the peninsula by cutting pieces of wood with a router and a circle jig. After filling the hollow space with blocks of wood, he glued the pieces together and adhered a ⅜-inch-thick piece of bent plywood to the outer edge. Then he secured the new arched structure to the exterior of the peninsula with an 18-gauge nail gun.

Rather than purchase a bunch of dowels, which he would have had to split lengthwise, Cam swathed the peninsula in half-round molding (the thin sticks are flat on the back). The pieces measured anywhere from 8- to 12 feet tall, so Cam trimmed them down using a miter saw and then adhered each piece to the peninsula with Gorilla Glue and pin nails. There are a total of 136 slivers of wood that cover the peninsula. “Don’t rush it,” he says about placing them. “If you don’t keep things straight at the beginning, it will be way off at the end.”

They covered the peninsula in Benjamin Moore’s Chantilly Lace, the same bright white hue on the cupboards and walls. “This step was the most tedious part,” recalls Cam. The paint had to be applied thinly so it wouldn’t goop up in the tiny valleys where the individual ribs meet. To ensure a crisp line along the floor, he put down a protective plastic sheet, which proved to be tricky to remove after the fact (he had to use a scalpel to disconnect the tarp from the dried paint).

Leigh and Hachey swapped the old laminate countertop with a pure white quartz from Quartex, which was fabricated with a rounded edge to match the curved peninsula. The room’s sleek, white aesthetic allowed all the other textural accessories in the room, like the putty-toned pendant lamps from Triple Seven Home and the Wayfair stools with wood detailing, to stand out. Who said cutting corners has to be a bad thing?

See more stories like this:  This Emerald-Tile Kitchen Renovation Was 17 Years in the Making Two Weeks and $1,000 Was All It Took for This Couple to Transform Their Kitchen Farewell, All-White Kitchen—These 11 Cabinet Designs Are About to Take Off