With 3 Months to Renovate, This Family Put Scrap 2-by-4s and Old Ceiling Parts to Use

A tiny red house gets a big refresh. 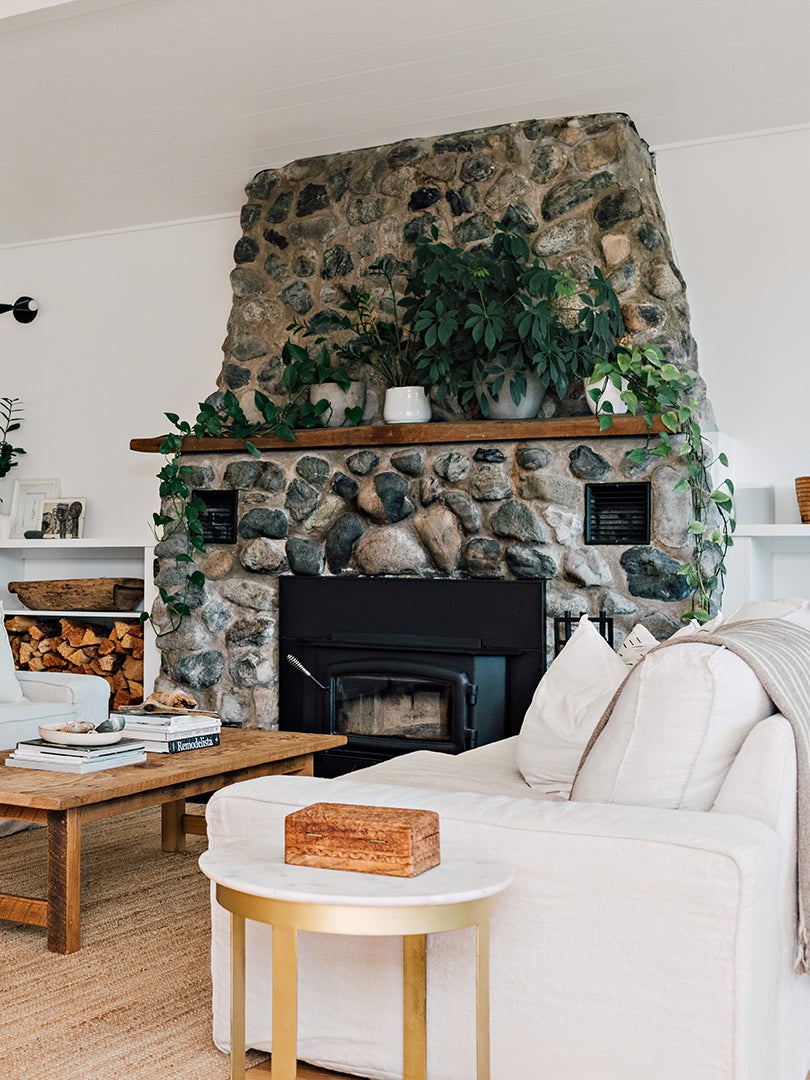 Natalie Bjordal’s earliest memories of Woodlands in North Vancouver, British Columbia, capture the quaintness of the rural waterfront area. “At that time, there was a water taxi that would take kids back and forth from school,” she recalls. While she only lived there until she was 4 years old (her parents bought a place in nearby Deep Cove, where both Natalie and her husband, Jason, grew up), when she saw a property listed in Woodlands a few years ago, she couldn’t help but feel nostalgic. So much so, the couple bought it. “You get peeks of the water views between the trees,” says Natalie. “It’s quite serene.”

The only problem was, the couple and their two young daughters had to wait at least a year before becoming official owners in 2019 (there was a tenant leasing the place). “I remember touring it, and we couldn’t even see one of the bedrooms because he had about 15 bikes in it,” she says. “But I saw the potential.” While the stone fireplace in the living room was “like a work of art,” the 1,800-square-foot home needed some TLC. Luckily Jason took on the role of project manager, framer, and shiplap-er (he has a background in commercial wood framing), and they recruited their friends, Tim and Lenny, to fine-tune the details. “We put our blood, sweat, and tears into our renovation in the woods,” says Natalie—also plenty of paint (the formerly red exterior is now Benjamin Moore’s Simply White). In just three months, here’s how they gave the house new life.

The second time Natalie and Jason toured the home, she noticed there was a small opening in the drywall on the drop ceiling. “I poked my head up there and was like, ‘Oh, my gosh, there’s so much space up here,’” she recalls—unused space. Opening it up and adding a beam was a no-brainer. But they took it another step by knocking down the adjacent wall to the kitchen, where they also ended up vaulting the ceilings, to create one big, flowing space.

Go IKEA on a Time Crunch

With the previous kitchen cabinets unsalvageable, the pair started fresh with affordable white IKEA frames and doors, avoiding pricey custom ones that would likely delay the project. “I needed to get this kitchen done superfast,” says Natalie (the family was renting a small place for three months while they were renovating, so they had a deadline to meet). To really brighten up the kitchen, they installed 1-by-8-inch shiplap boards everywhere. The added pro was that they didn’t have to put drywall up first (it goes right on the studs). And “we got it preprimed so we didn’t have to apply as many coats of paint,” shares Natalie.

Give Ceiling Discoveries a New Purpose

In the process of raising the ceilings, they discovered 12-inch-wide cedar boards, which the couple had repurposed in a myriad of ways. Lenny made furniture (like the coffee table) out of it and saved a chunk for the kitchen desk-slash-homework nook. “I love making spaces where everyone can come around and hang out and be together,” says Natalie of putting the work table in the kitchen.

Natalie surmised the tiny main bathroom could fit both a shower and a tub because that’s how it was originally laid out (the dated space had a teeny angled shower in the corner by the door). “I knew if we did a small square shower, we could fit a freestanding tub by the window,” she says. “We measured it a million times.” The little green vanity was an IKEA hack: They added brass knobs and a piece of the old ceiling cedar boards for the countertop.

One night while having some wine, Natalie turned to Jason and said, “Let’s build the kids a bunk bed.” “Because they just had these IKEA bed frames that didn’t really fit in the space…they didn’t have enough room to play,” she says. But she didn’t want a structure with a ladder, because she didn’t want anyone falling in the middle of the night, so they decided to go custom and make it themselves using leftover 2-by-4 boards and birch plywood.

At first, Natalie was going to use the lofted crawl space in the living room as a storage spot, but instead she decided to make it usable. Too small for a guest room, she threw down a cozy rug, effectively making it a play zone for their kids when they have friends over. “They just hang out there for hours,” she says. The good times live on.