“It ended up being the best surprise.” 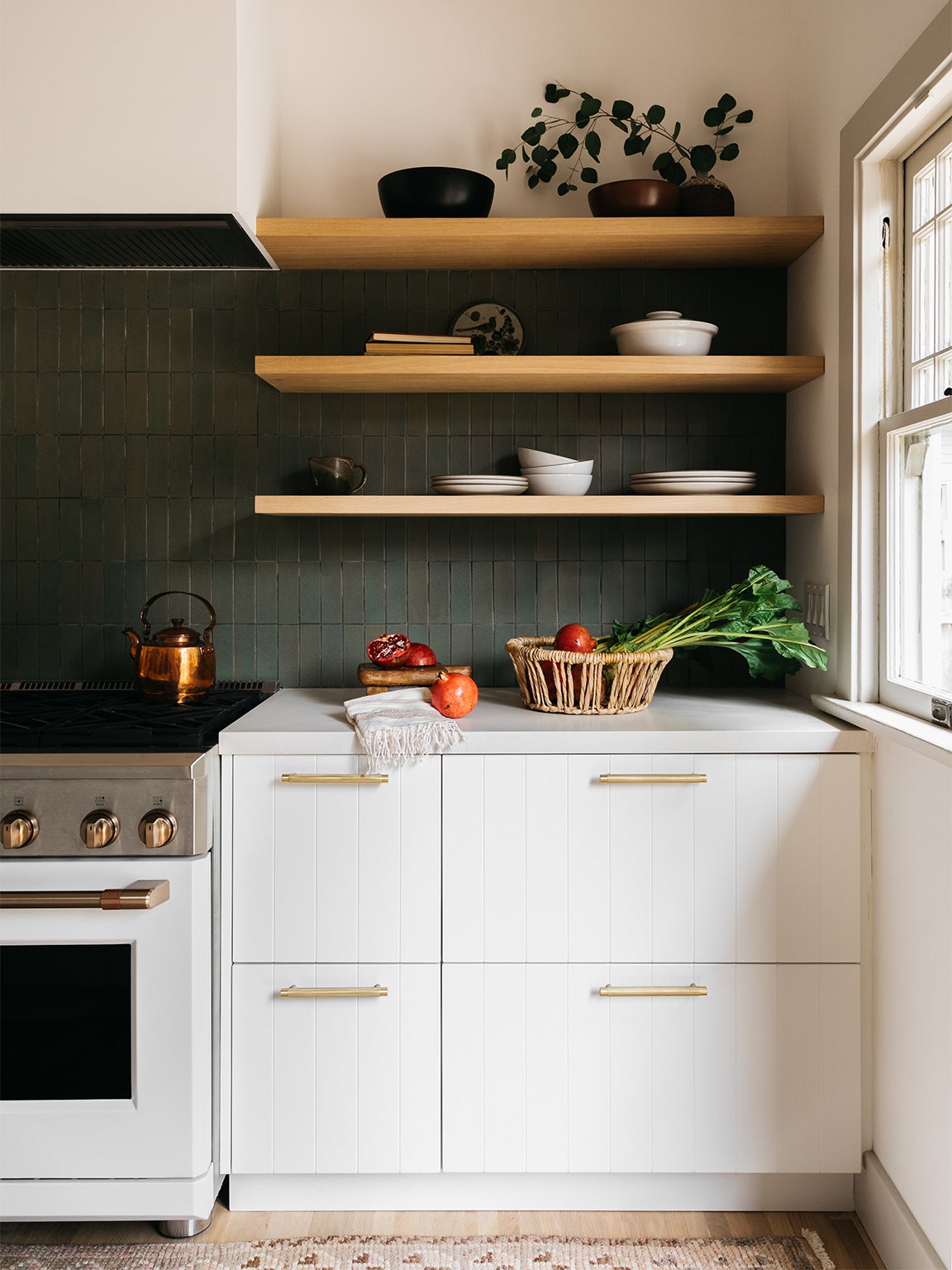 Most people don’t want to buy a house that has three bedrooms and only one bath, but Carly and Justin Wilczynski didn’t mind. In fact, narrowing their search down to fixer-uppers in need of an addition gave them the upper hand when they were shopping for their first home in Pasadena, California. “When we found this 100-year-old bungalow, we instantly fell in love with all of its potential,” says Carly. The couple tasked the design team at A1000xBetter with updating the place. Building out a second, small bathroom was easy enough—expanding the awkward, L-shaped kitchen was another story.

Other than the fact that the space opened up to the backyard, there wasn’t much that the Wilczynskis liked about the room. “Everything needed to be changed,” says Carly—starting with the low, faux recessed ceiling. Little did the designers know until they broke through the surface that they had the ability to go way, way up. Here, the couple looks back on the toughest questions they faced as first-time homeowners.

To vault or not to vault?

When the Wilczynskis got a call from principal designer Kirsten Blazek telling them the attic above the kitchen was relatively free of crossbeams—meaning they could raise the height of the room by a significant chunk (around nine feet)—they didn’t hesitate to vault the ceiling. “It ended up being the biggest decision and the best surprise,” says Carly. The pair saw the change as a long-term investment, one they hope to recoup if they ever sell. The designers added Douglas fir beams wrapped in white oak veneer for structural support.

How high should the backsplash go?

The team originally opted for a standard 18-inch-high backsplash across the main wall, with the exception of the area behind the range, which they raised to meet the bottom of the hood. But since there were no upper cabinets (the opposite wall has floor-to-ceiling storage), the floating shelves and windows looked bare. So they kept going and raised the tiles to a full 36 inches on either side of the windows. Now the backsplash is one perfect straight line. “It added so much dimension and richness,” says Patrick Maziarski, a senior designer at A1000xBetter.

Are IKEA cabinets worth it?

The obvious pro of buying cupboards from IKEA is the price tag. One not-so-obvious benefit? Storage is seamless. “Everything I buy from the store, like lid holders, trash cans, and utensil organizers, are made perfectly to go in there,” says Carly. Maziarski drew up the plans for the millwork, the couple made some minor tweaks, and then they sent them off to the retailer to be fit to size. To elevate the plain fronts, they chose beadboard doors from Semihandmade and handles from Schoolhouse.

What appliances should we buy?

It’s easy to say yes to everything when you’re essentially starting from scratch, notes Justin, particularly when it comes to super-functional things like a range and a dishwasher. “I don’t know if it’s a part of getting older or a factor of renting our whole lives, but we never thought we’d get so excited about appliances,” says Carly, laughing. The pair splurged on GE’s Cafe line and a hands-free sink faucet. They surprised themselves by spending close to $10,000 on these essentials, but they made up for the splurge elsewhere, like by keeping the original hardwood floors from the 1920s. (They lightened up the dark, orangey planks by resanding them.)

Not wanting to eat up extra square footage by adding a laundry room, they hid the washer and dryer behind a tall kitchen cabinet door. Everything the couple could ever want, just a few steps away.

See more stories like this:  1960s Wallpaper Gives This Green Kitchen Major Charisma This Concrete Tile Kitchen Is Like a Life-Size, Pastel Rubik’s Cube This Kitchen’s Textured Tiles Are Just the Start of Its Euro-Chic Refresh