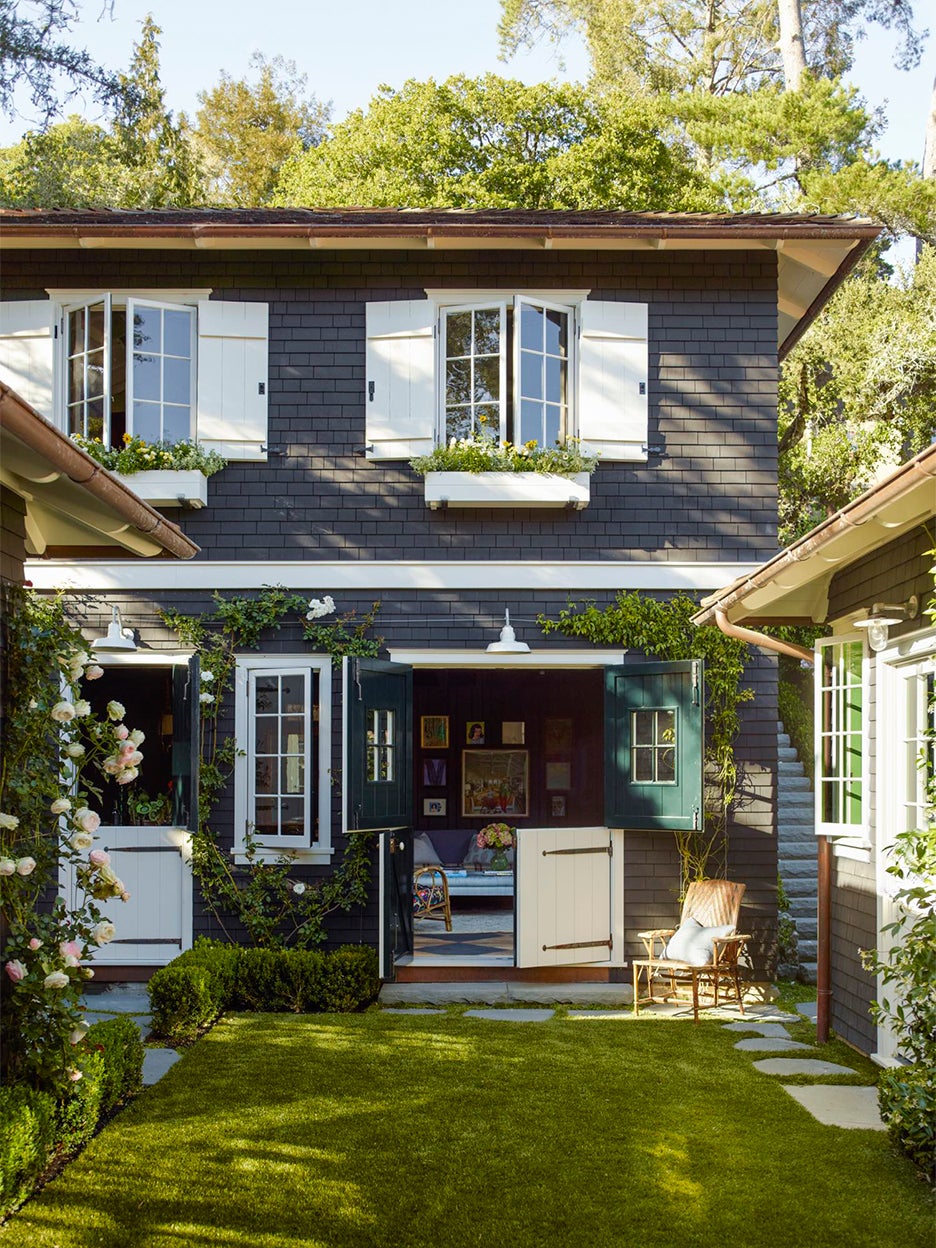 Gil Schafer looked aghast the first time he walked into the run-down Mill Valley, California, YWCA summer camp that would eventually become Mark and Blythe Harris’s family home. “I didn’t realize it at the time, but Mark teases me about it constantly,” says Schafer. It’s not that the award-winning architect couldn’t see the potential in the series of buildings peppered down a sloped hill, but he knew just how much work it would take to infuse it with the charm the couple desperately wanted. “It was big and rambling, but it was kind of chaotic and a little bit of a mess,” he remembers.

He wasn’t the only one with doubts. During their first real-estate walk-through, the couple nixed the house instantly. But a few days later, Mark had a vision in the middle of the night: It had to be theirs. Schafer, who has an affinity for imperfect structures, set out to give the sprawling property a cohesive (and intensive) facelift, with the help of British interior designer Rita Konig. Here’s how he reimagined it as a dreamy family home.

Schafer worked with local architect Barbara Chambers to figure out where the city would allow them to expand, but quickly discovered that the property had already been maxed out through various ill-planned renovations; they couldn’t extend out or up. So Schafer got creative. The house, which stood on stilts on a downhill slope, had plenty of room underneath the deck. “We thought, Could this be it?”

After getting the go-ahead, they dug a large family room and guest suite. The team did the same beneath the stilted garage to make space for a snug, inspired by the back room in British pubs by the same name. It’s situated across the garden from the kitchen, so Mark and Blythe can easily escape there after their kids have gone to bed. “It’s like a playroom for adults,” says Schafer.

Thinking Inside the Box

In the main house, Schafer had another layout dilemma. There was no indoor staircase that connected the two levels. “You had to go outside on a deck and down rickety steps,” he remembers. Still, they were centrally placed and joined to both the bedroom wing and the kitchen. A lightbulb went off: “I had this thought that it should feel like an old porch that got glassed-in later on,” explains Schafer. The top landing is now bathed in sunlight thanks to floor-to-ceiling windows on two walls, finished with French doors that open up onto a larger patio.

One of the elements both Mark and Schafer were determined not to lose was the cottage feel of the former summer camp. “Sometimes, when you fix something, you can suck the charm right out of it,” says the architect. He kept the character by bringing in reclaimed flooring and vintage wood paneling, which he sourced across the Pacific Northwest, North Carolina, and even as far as Canada.

Each application had a secondary purpose. In the downstairs family room, Schafer used vertical wide planks to make the room feel taller. Horizontal boards along the staircase give it an exterior look. Wainscotting lines the hallways because of its durability and washability. To keep the different additions uniform, he painted most of them: a hunter green dining room here, white floors there. “It just feels comfortable like an old shoe now,” says Schafer.

Schafer fell in love with the scale of the original building, but some of the individual rooms were on the smaller side. The architect opened up the ceilings to expose the beams throughout, creating a lofty feel. He also snuck a dormer high in the kitchen’s roof to bring in a shaft of light and opened up doorways with transom windows for a sense of airiness.

Attention to the Smallest Details

A mix of French and Dutch doors leading outside let the breeze flow in (while keeping the kids and pets indoors). Mark, who had gone on an antique hardware hunting journey during a previous renovation, collected old lockboxes and other vintage knobs to install in every room. To match all those oxidized metals, Schafer sourced mother-of-pearl push-button light switches to replace the standard plastic ones.

The kids’ rooms got the most special moment of all: a secret opening that connects the two spaces. “Quirky corners that we remember from our childhood are just magic,” says Schafer. And that’s just what this home is about.