How an architect optimized his tiny prewar apartment. 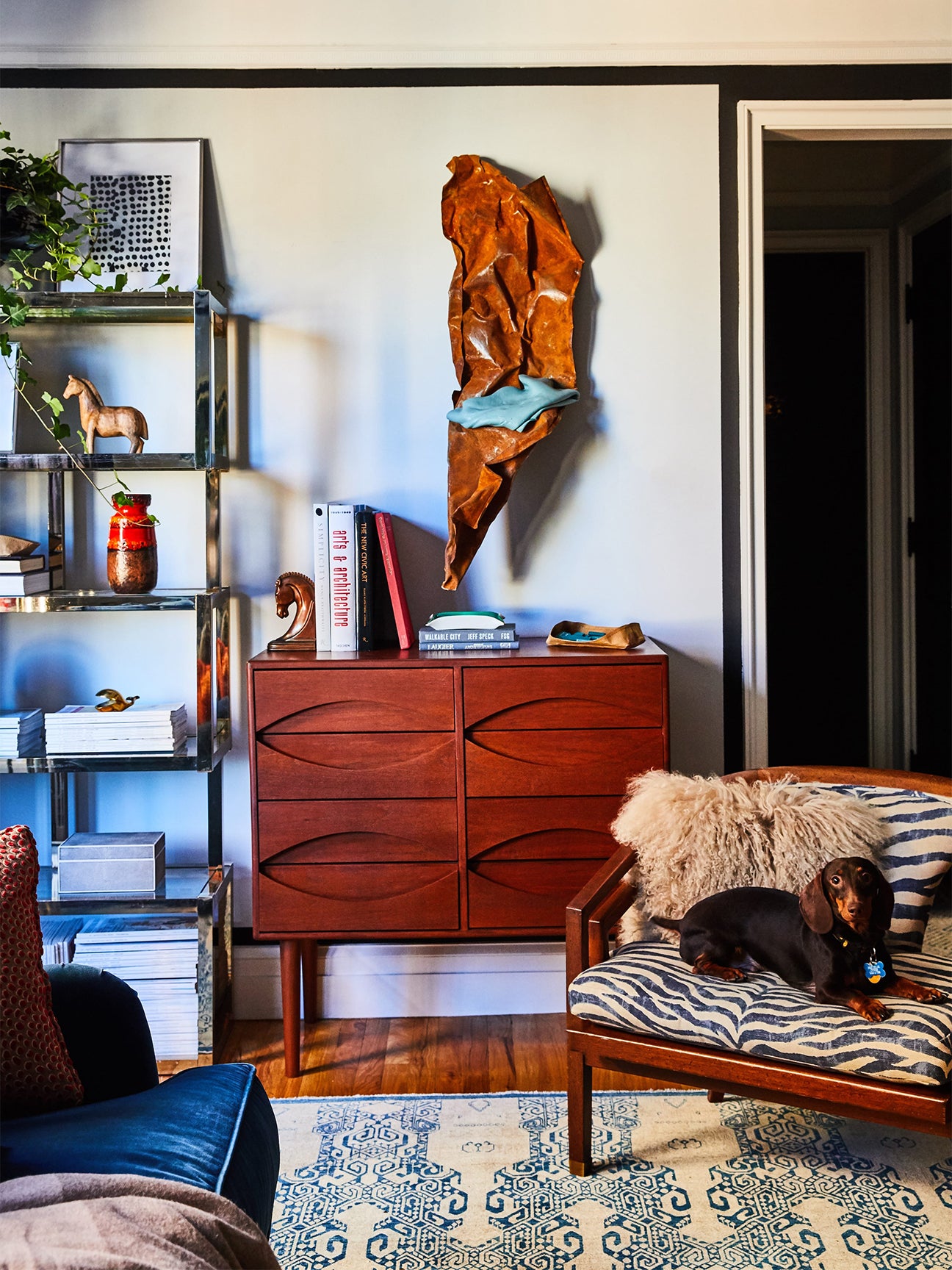 Michael Geller barely noticed his Manhattan apartment’s 50-year-old appliances or the pizza boxes left over from previous tenants on his first visit. All he saw was the original Greek key picture rails. A theme was born for the 495-square-foot one-bedroom in Greenwich Village the architect and his wife, Tess, now share with their mini dachshund, Jerry. One he dubbed “Greco Deco.”

Nine months later (six more than the contractor had promised), the couple moved into a spiffed-up space that married Mediterranean influences with Art Deco details and ’70s pizzazz. “I associate a similar glam feeling between the two decades, so it just clicked,” he says. Using his experience working on period homes at acclaimed architecture firm G.P. Schafer, Geller reimagined the tiny space to make it feel bigger, brighter, and more functional.

He Flipped the Kitchen Floor Plan

The claustrophobic kitchen clocked in at only 36 square feet. Geller had intended to open up the space completely to the living room, but the plumbing setup made that impossible. Instead, he partially knocked down a wall, moved the doorway to create a larger opening, and flipped the cabinet layout 180 degrees, which allowed him to add an L-shaped countertop, a 24-inch range, and a full-size fridge, plus nearly double the storage space. He finished the space by painting the new custom cabinets in Benjamin Moore’s buttery White Down. “I wanted the kitchen to feel warm no matter the natural light,” he explains.

He Returned the Bathroom to Its Roots

Although Geller only salvaged the bathroom’s medicine cabinet, which he cleaned up and reinstalled, he kept the updated finishes true to the original 1920s architecture. It was goodbye, budget vanity (an early-aughts rental upgrade, no doubt) and hello, console sink by American Standard. “I had seen it in another apartment before renovations started and I thought it had the perfect Art Deco feel I was going for,” he notes.

Geller wrapped the four walls in a simple subway tile with white grout. “I thought it would create an interesting plastic, almost pliable texture with the many corners of the room,” he explains. On the floors, he opted for a prewar-style penny tile (he loved the way it felt under bare feet), but modernized it with dark contrasting grout.

He Zeroed In on the Doors and Trim

The other rooms saw lighter upgrades: refinished hardwood floors, new built-in closets, and antique doorknobs from the 19th century that Geller bought at Olde Good Things. “They were the first thing I purchased for the apartment,” he remembers. “I originally thought I got a deal on them, but to get them installed on the doors was a different story and I paid dearly.”

But he achieved the biggest impact by painting the doors and millwork in Benjamin Moore’s Space Black. “I painted the black stripe on a whim one day because I had a little extra time on my hands and I was bored,” he remembers. He was inspired by late decorator David Hicks’s signature style: “I love paying homage to past greats by adapting their solutions to a contemporary setting.”

He Even Kept the Furniture on Theme

In the living room, Geller kept the ’20s-meets-’70s vibe going with groovy art and handmade furniture, like a console table with a horse-leg motif that he designed himself, inspired by the French Riviera’s Villa Kerylos. “The entire place is an archaeologically true re-creation of an ancient Greek villa,” he says.

He paired that piece with a 1973 super-graphic silk screen by Reis & Manwaring he found on Chairish and a sculptural work by the couple’s friend Kennedy Yanko that they received as a wedding gift. If anyone could connect the dots between the different decades, it’s Geller.