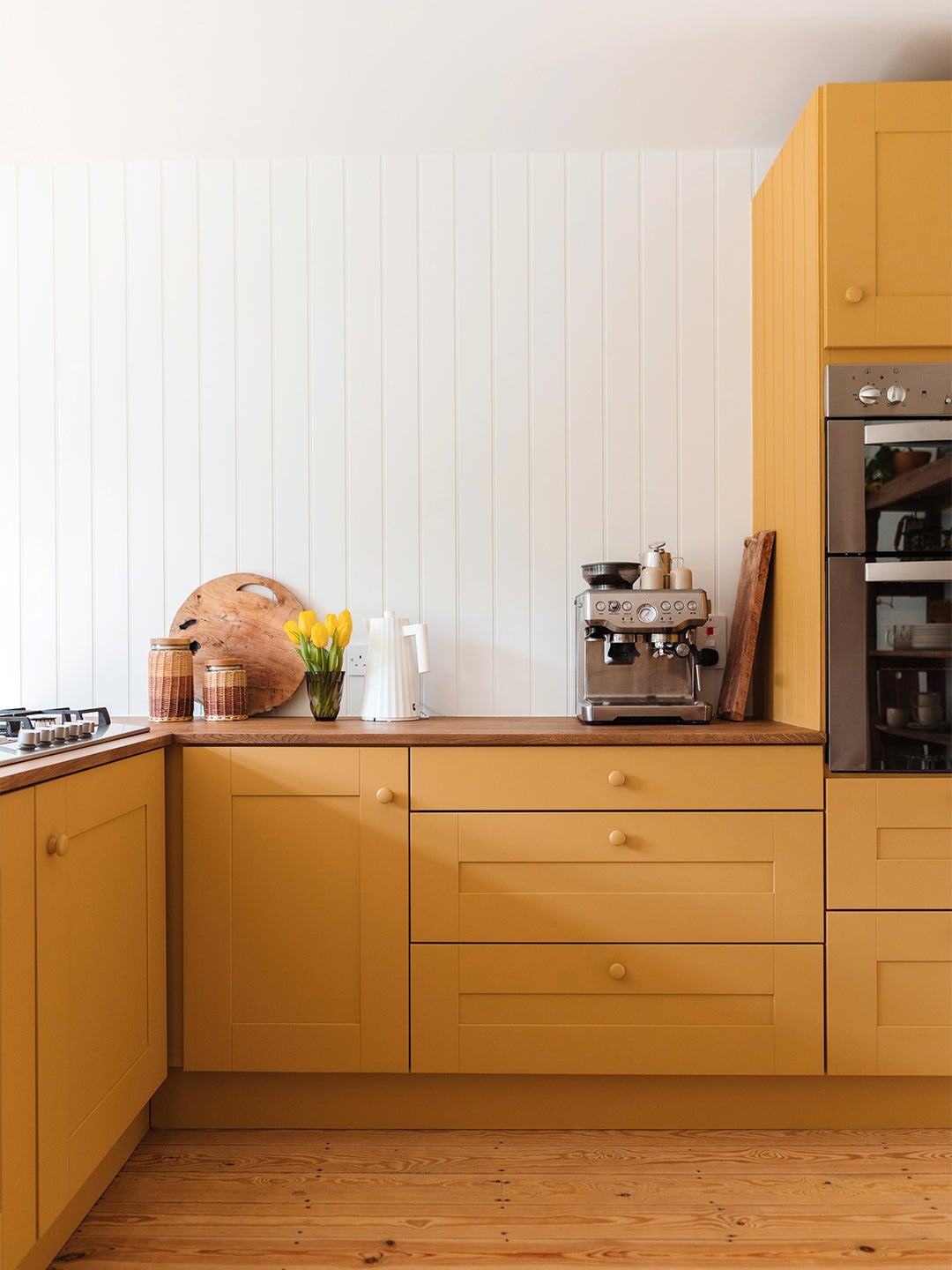 A few years down the line, Emily Jane Lathan and her husband, Dan, plan to turn their kitchen into a bedroom. In other words, they didn’t see the point in putting a lot of time or money into a big overhaul in the meantime. But as any seasoned renovator knows, once you get started, things tend to snowball. What was meant to be a weekend project—a coat of paint and open shelves instead of upper cabinet doors—became a four-month ordeal that involved stripping linoleum flooring, a new butcher block counter, and a budget of $3,900. However, Lathan insists it was worth it: “I had envisioned the initial changes would be temporary, but now I just love it.”

Peel Back the Layers

While Lathan is still debating whether or not to keep the 1970s bungalow’s original geometric carpet, the kitchen’s gray linoleum flooring was an immediate no. Rather than layer more vinyl or tile on top, she was curious to see what was hiding underneath. “We should have torn it up first thing,” she says. “It made all the difference.” They were looking at 54-year-old hardwood planks in nearly pristine condition.

A deep sanding and an acacia wood stain were all it took to restore the planks to their former glory. Lathan used the same finish (her go-to due to its warm but not too yellow finish) on the $980 oak butcher block counters as well.

After nearly two months of peeling old blue wallpaper off the walls, Lathan was left with an uneven texture and a gaping hole where the former vent hood had once lived. A simple paint job wasn’t going to add enough warmth and visual interest. Instead she opted for sheets of tongue-and-groove MDF painted a snow white. “It was the perfect solution to cover all the new plaster’s imperfections,” she says. Not to mention it mirrors the existing paneling in the living room.

Lathan found a Smeg refrigerator on eBay (for only $430) after she finally accepted that the lack of a real freezer in the original Kelly green appliance wasn’t going to fly. The one issue? Positioning the fridge within of the L-shaped cabinetry meant that the couple would run into it every time they entered the room. In a less traditional home—the far corner near the exterior door—it’s no longer in the way. Plus she likes how it looks when she’s sitting in the garden.

Overlooking the flora, the glass doors allow plenty of light into the space, but those rays were being blocked by a few pesky solid wood upper cabinets. They had to go. (An antique bookcase now displays her tableware collection.)

However, it wasn’t worth it to Lathan to tear out the rest just to replace the units with IKEA boxes. “All of the frames were still incredible quality,” she says. Here, a $50 gallon of paint was the quick (and cheap) answer. Torn between marigold and sage, Lathan went with her gut and embraced the bungalow’s groovy past with a mustard coat on everything, including the new budget-friendly drawer pulls ($12 for a pack of 20). Golden hour, but make it all day long.