This Couple Was Quoted $15K for Their Peninsula—So They DIYed It for $1.5K 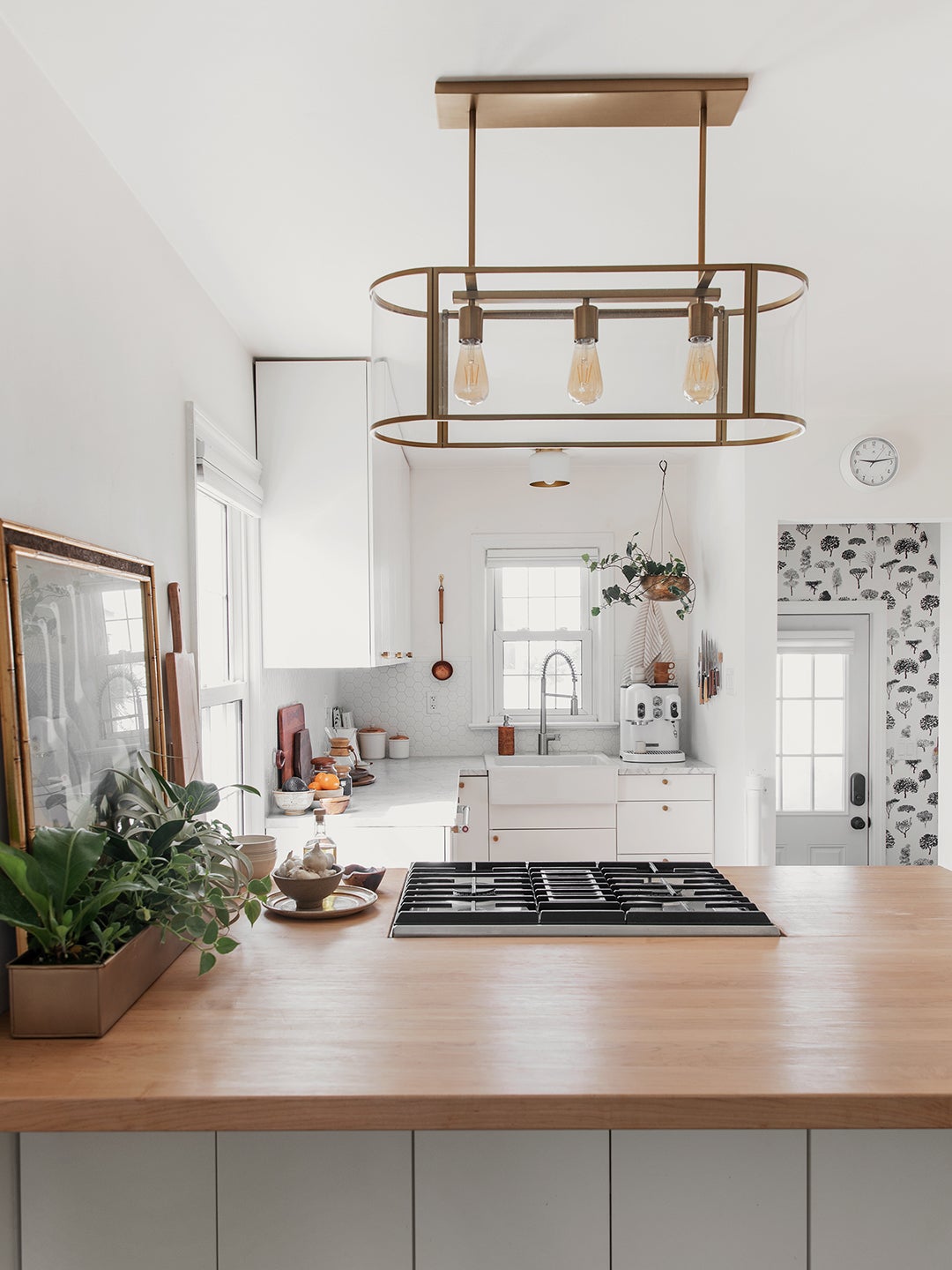 The lowest quote photographer Jillian Guyette and her husband, Robert, received for building a new peninsula in their tiny New Jersey kitchen was $7,000. The highest was around $15,000. The reason? They wanted butcher block, and not just on the countertop—they requested a waterfall feature. “We felt like it would look unfinished if it didn’t have some sort of design element to it,” explains Jillian.

While you see waterfalls done in marble and quartz all the time, making one out of assembled wood (often maple, teak, birch, or walnut) isn’t as simple. Butcher block is easy to come by and not all that expensive (you can buy slabs of it at IKEA), but achieving the continuous effect with the slats and cutting out an opening for the stovetop would require some high-level skill. Most contractors Jillian and Robert talked to were scared of the material chipping. “Nobody was willing to do it,” she says. So Robert and his dad decided to tackle the job themselves, all for a mere $1,500.

The pair ordered 1 ¾-by-1 ¾-inch dimensional wood pieces in semi-finished maple from a company out of Ohio called Baird Brothers. In wood countertop design, you can either opt for a full rail, which are long slabs, or a partial rail, which are chopped-up pieces that are glued together, notes Robert. The latter is a lot cheaper but less structurally sound, so the pair opted for the former, knowing it could withstand daily cooking wear and tear.

In order to make sure the side of the 37-inch-tall structure matched the 74-inch-long, 54-inch-wide countertop, they ordered extra-long rails (around 11 feet long) so that the 90-degree angle was crisp. “Otherwise the effect isn’t as precise or as cool,” says Robert.

The Game of Tetris

Because wood is sensitive to temperature fluctuations (it can warp), they did everything indoors in Robert’s father’s living room, cutting each individual rail using a biscuit joiner before gluing them together. The pair pieced together the countertop surface in three parts: a long section for the barstool side and two chunks to go on either side of the cooktop. This meant they ultimately avoided the complicated cut all the contractors were worried about. “We built the countertop around the range, basically,” explains Robert.

The only challenge was achieving a completely even finish. In a factory setting, a high-tech planer would be used to get that even surface, but in this case, a belt sander and an orbital sander would have to suffice. It took more time and required more focus to get everything flat. “The other hard part was the installation,” says Robert. They did practice sets (to catch mistakes) before truly installing it and finishing it with an organic clear coating from Rubio Monocoat. Lesson learned: Do go chasing waterfalls—and heavily consider building them yourself.