The Secret to a Comfortable Kitchen: The Right Countertop Height

A few small tweaks made this space the perfect fit. 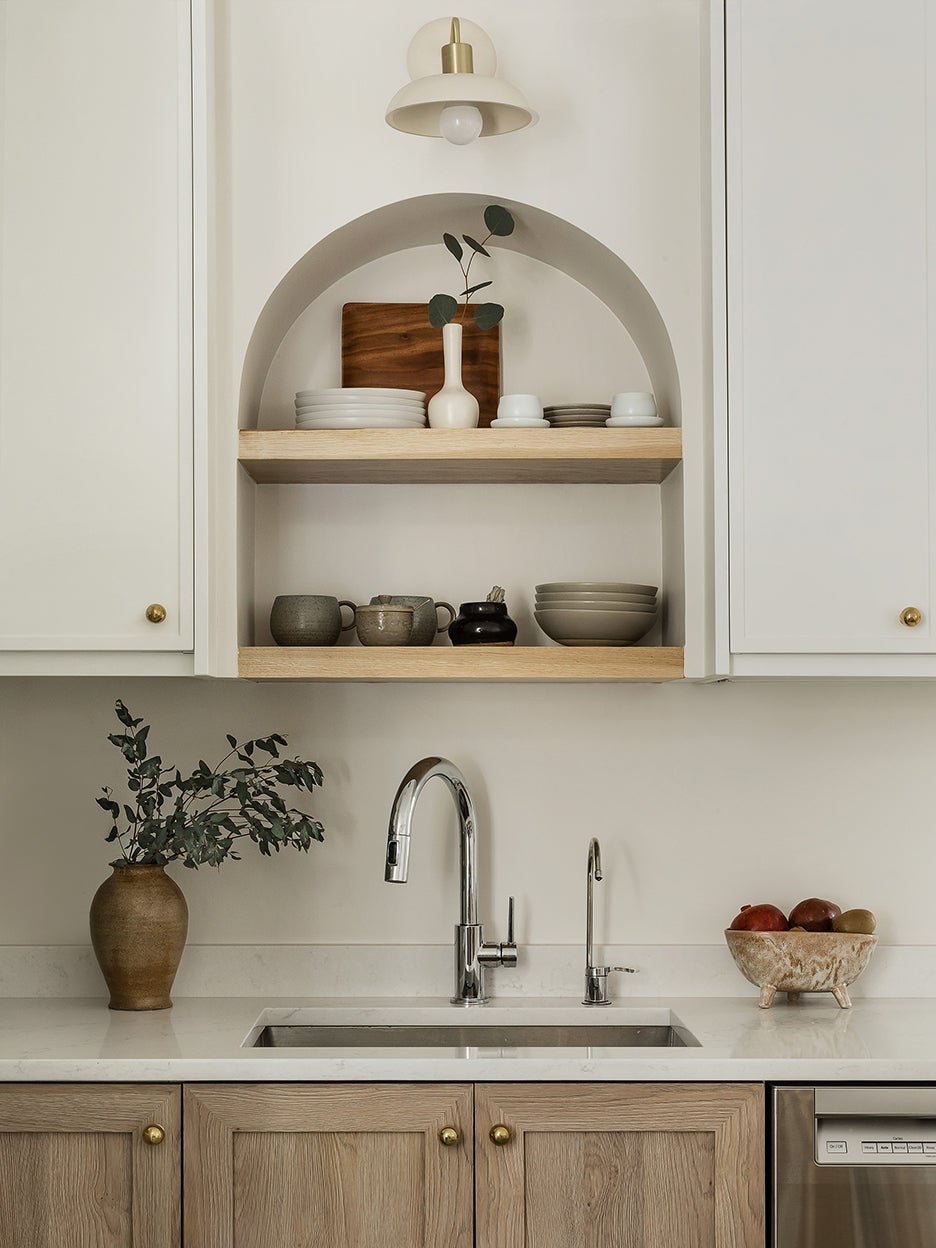 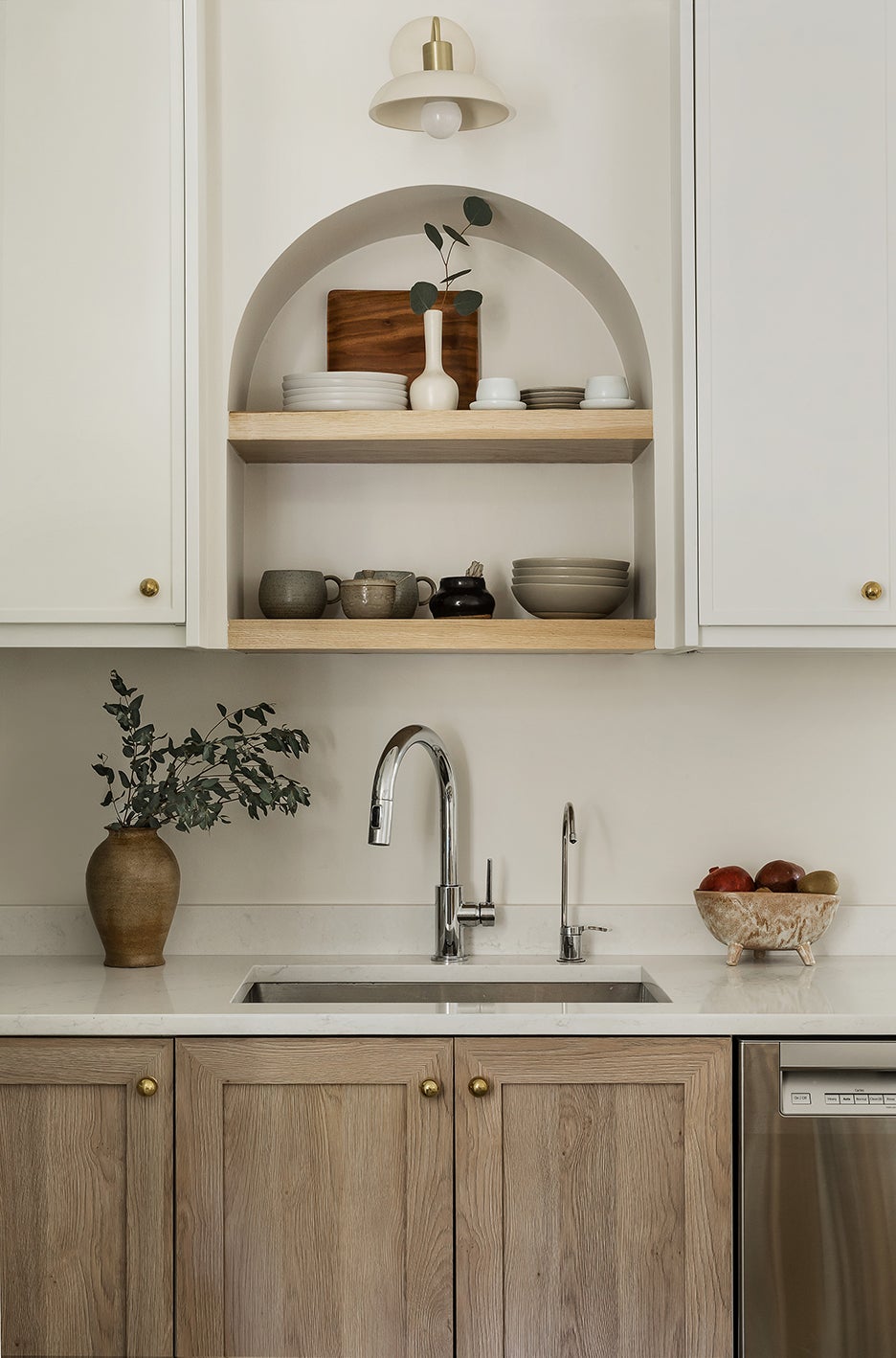 Feeling comfortable at home looks different for everyone. For some it’s the addition of a security camera; for others it’s ambient lighting that creates a calming environment. But for Shannon Tate-Giordano’s latest client, ease came in the form of raised kitchen countertops. “She’s almost 6 feet tall, and she has brothers (around 6-feet-5 and 6-feet-4) who come to visit,” says the Massachusetts-based designer. “Everything was so small around them.” Cooking in the cramped 130-square-foot space was backbreaking work (literally), so when her client bought her longtime rental, she decided to give it a major upgrade with Tate-Giordano’s help.

Before addressing the low countertops, lack of island, and dated cabinetry, the designer turned a skinny, awkward closet that was more like a giant junk drawer into seamless storage. “I think having a pantry is always very dreamy for anyone who has a small space,” says Tate-Giordano. The owner’s height definitely factored into the next big decisions, but so did the prospect of resale. She saw her Cambridge apartment as a solid investment (hence the splurge-worthy Smeg refrigerator). Ahead, Tate-Giordano shares the small customizations that made the kitchen a better fit, plus a few other changes that transformed the space.

Give the Lower Cabinets a Facelift 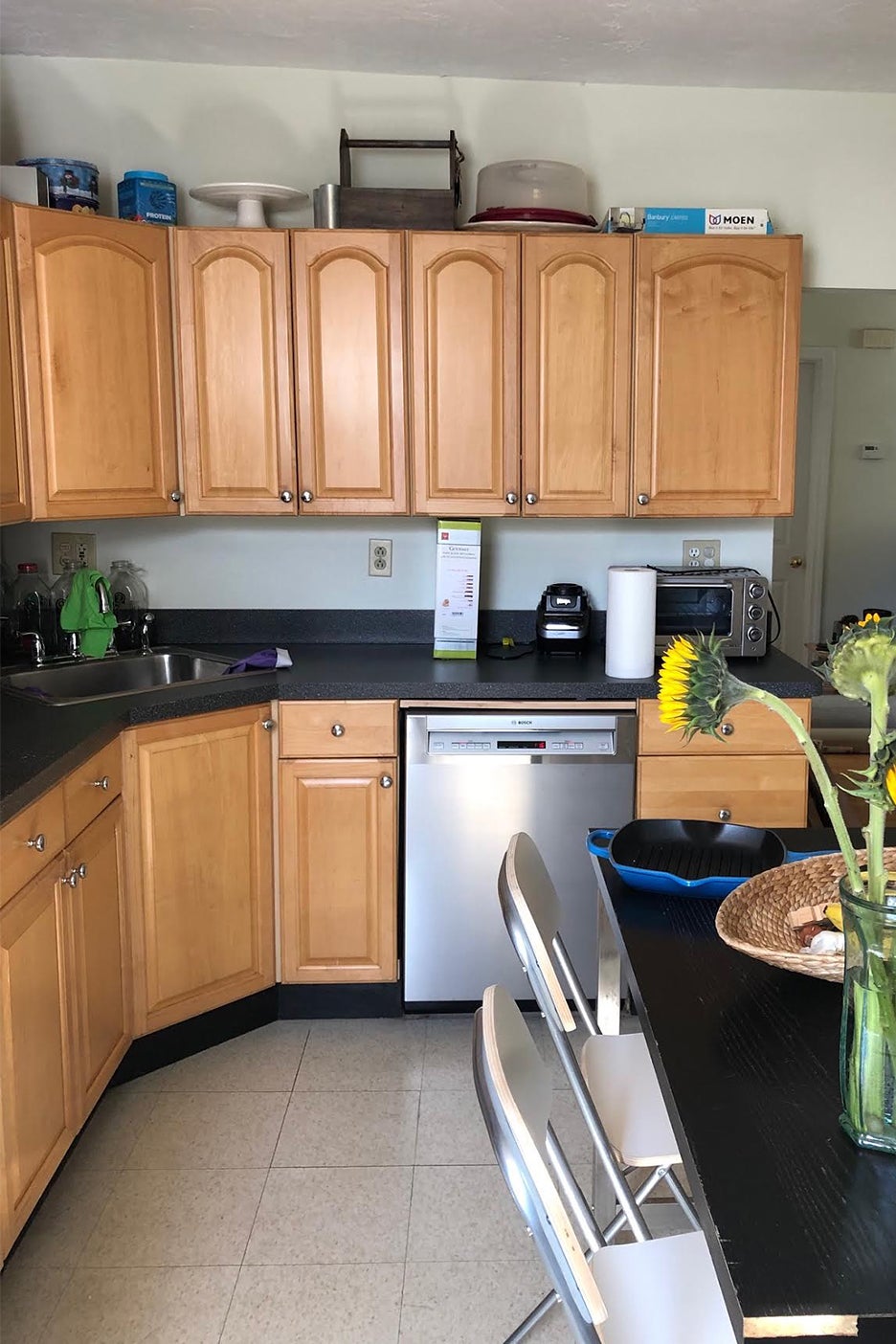 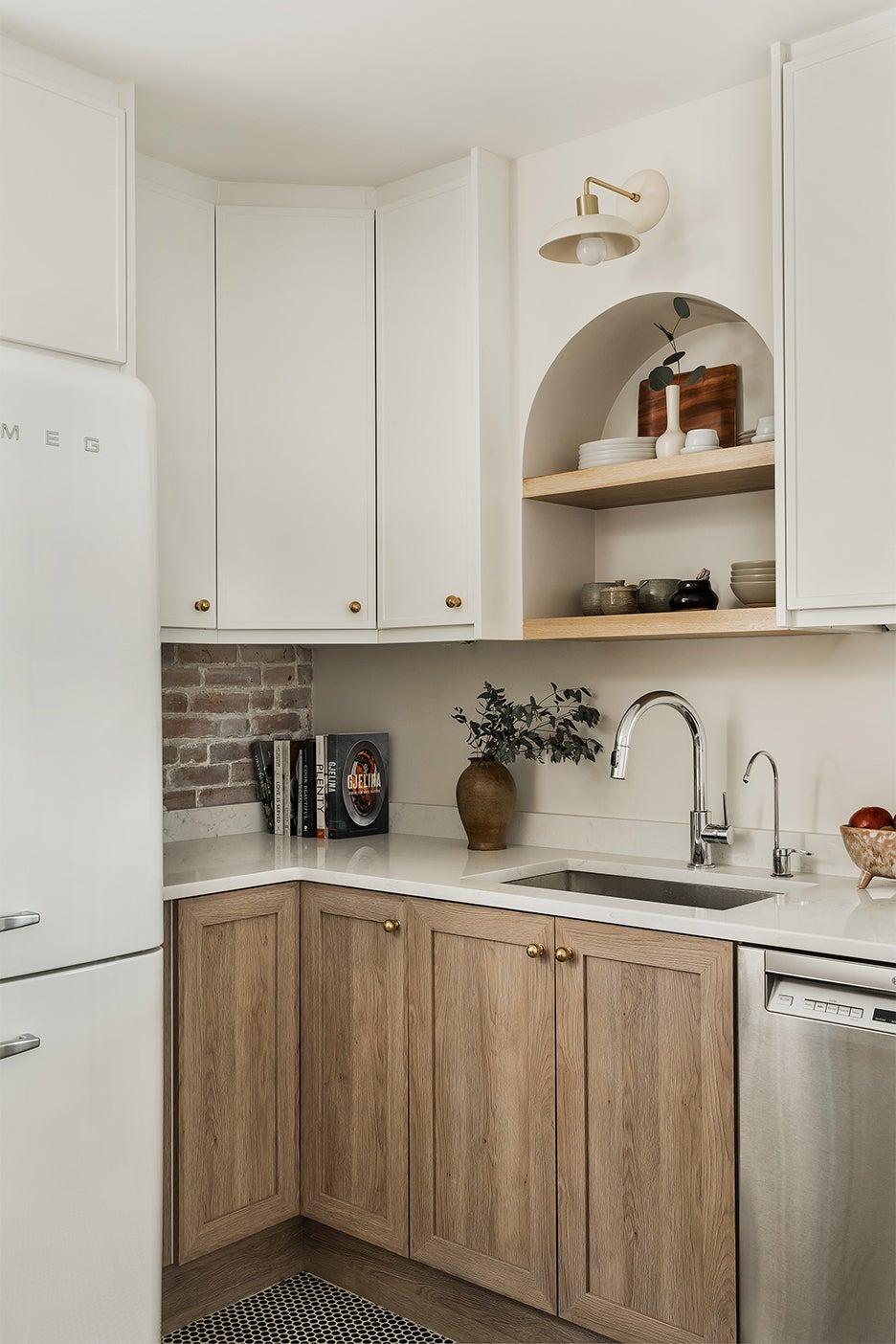 Tate-Giordano started with the toe kicks (or the sliver of recessed space at the base of the floor-mounted cabinets). Rather than go with a standard 4-inch-high strip, she raised it to 7 inches, which ultimately took the quartz countertop 39 inches up from the ground. “I never had to do anything like that before, and I was like, What do I do about the appliances?” she recalls. It would have looked wonky to have the dishwasher and stove not align with the surface, so her contractor, Mato Penava, added a cement foundation underneath them. By painting the platforms black, they made it look like a seamless extension.

Like the new countertops, the central island was custom-designed to be extra-high. The spot also happens to double as the dining room, so bringing in simple stools that can be tucked away when needed was a must. 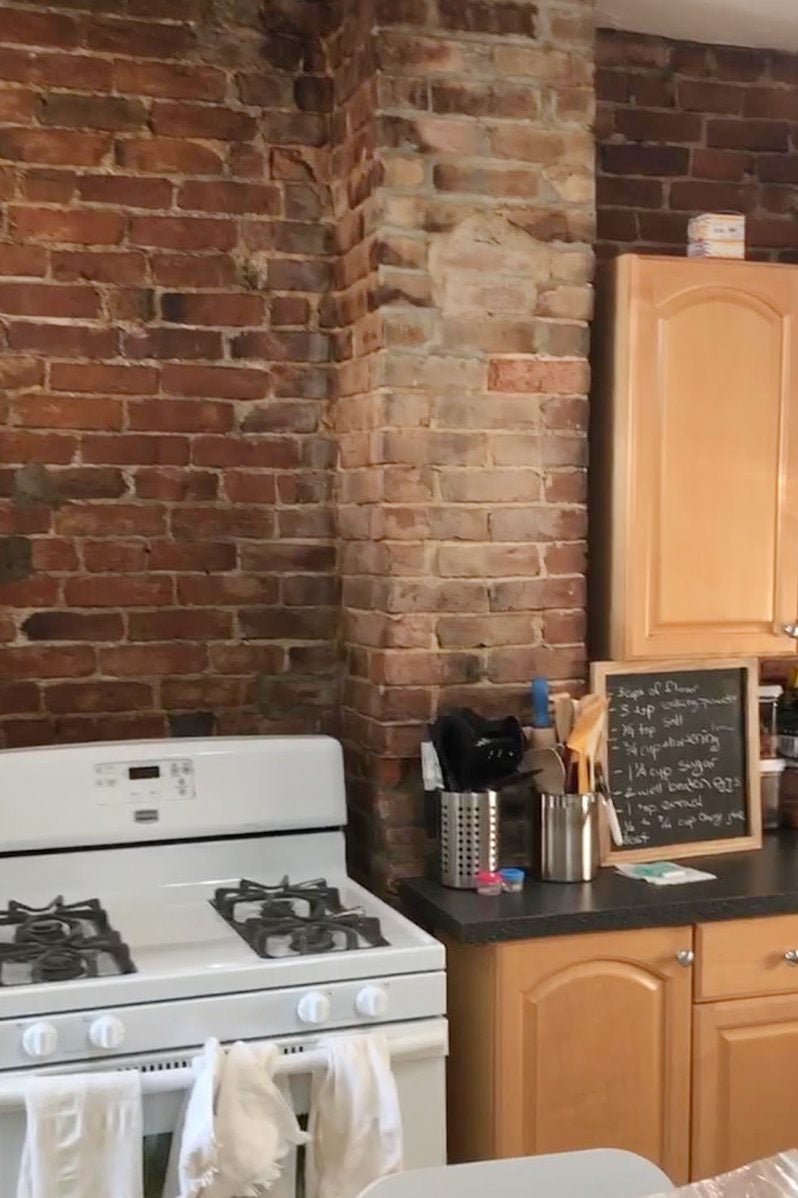 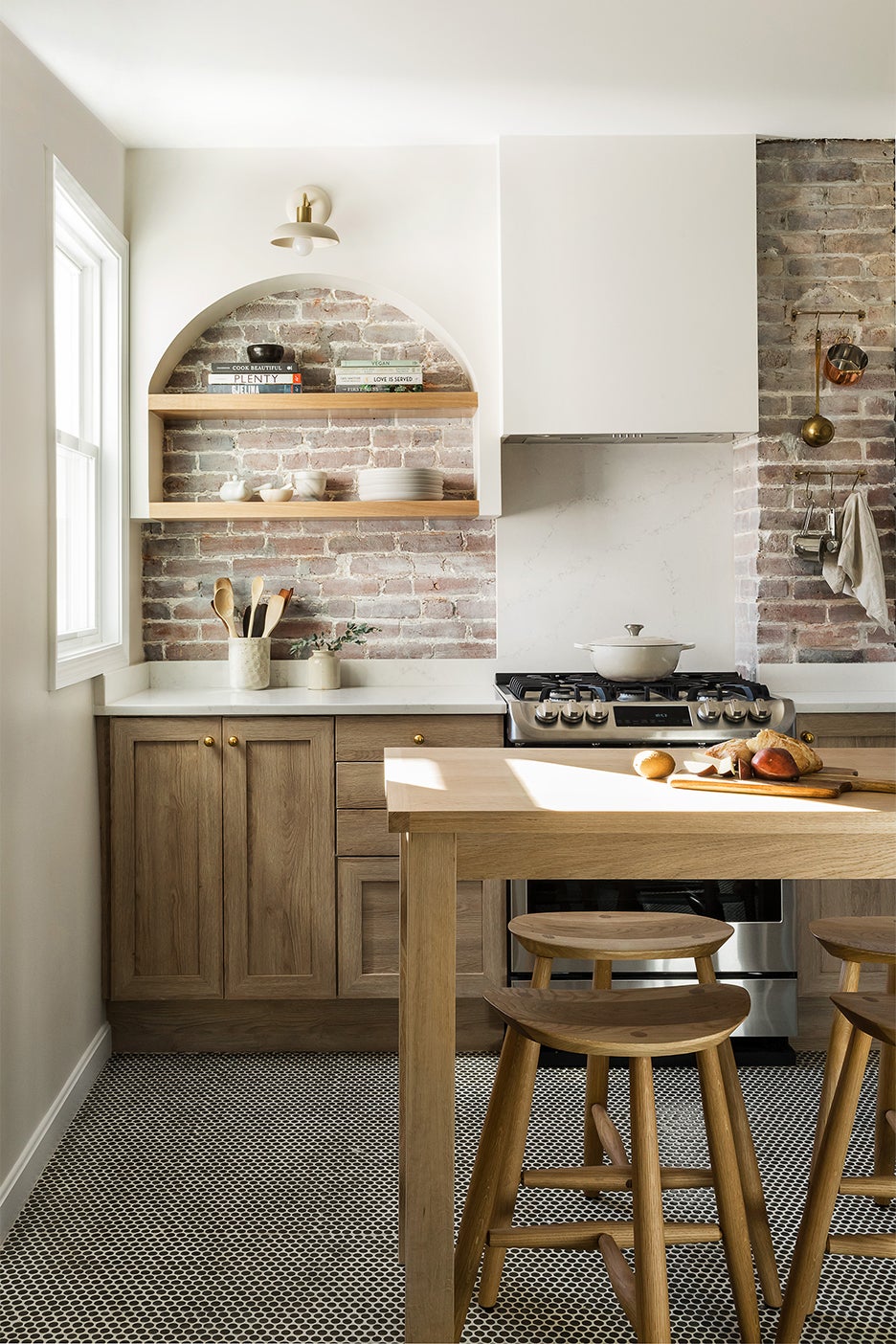 Tate-Giordano considered the exposed brick wall (most noticeable where the old stove used to be) a treasure. Hiding it wasn’t an option, but to make it work with the new drywall arched cutouts and vent hood, both painted in Benjamin Moore’s China White, she decided to go over it with watered-down white paint. “It took a while to find the right ratio,” she says. She and her contractor tested out patches on parts that would soon be covered by cabinets before landing on the right finish. “We really got into the grooves,” she notes.

Another one of her client’s major requests? She didn’t want to accidentally hit her head on a pendant lamp. “Nothing dangling from the ceiling,” the designer recalls of her directions. Tate-Giordano nixed those fixtures and opted for Cedar and Moss wall sconces.

Continuing the upper cabinets up to the ceiling wasn’t a tall-person thing—it was a storage thing. Inside the small corner cabinet, the designer incorporated a lazy Susan. “She’s tall, but it’s still pretty high up, so having that swivel function inside is super-helpful to get full access,” says the designer. 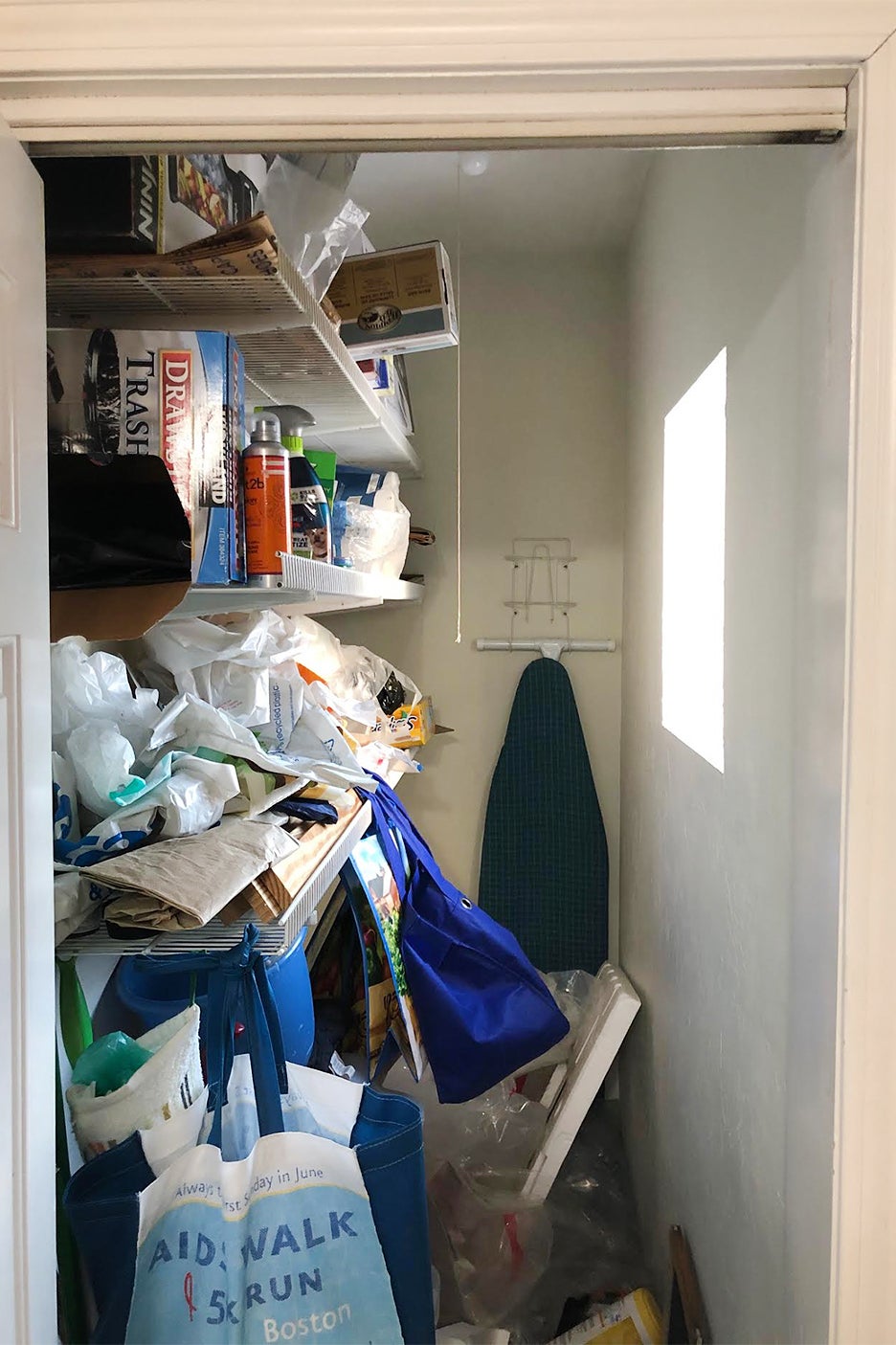 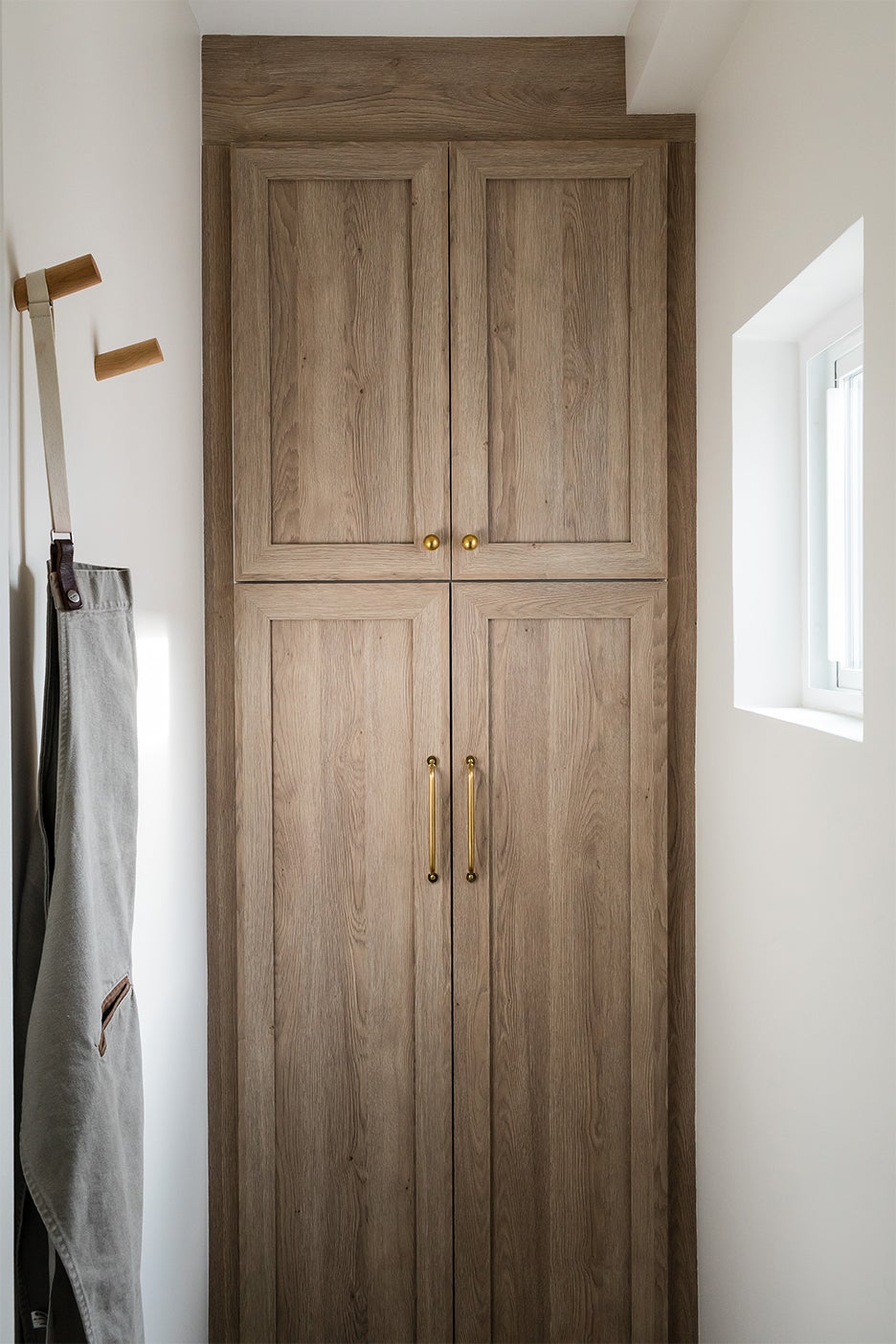 Dark green penny tile might seem like an impractical decision for flooring (you’d think crumbs would easily get lost), but Tate-Giordano has reason to believe otherwise. “I always argue that every single restaurant in New York City has mosaic floors,” she says. “Plus it wears beautifully over time.” We love ending on a high note.