A Forest Green Nashville Kitchen That Doubled in Size

Plus, a waterfall island that only looks like real marble. 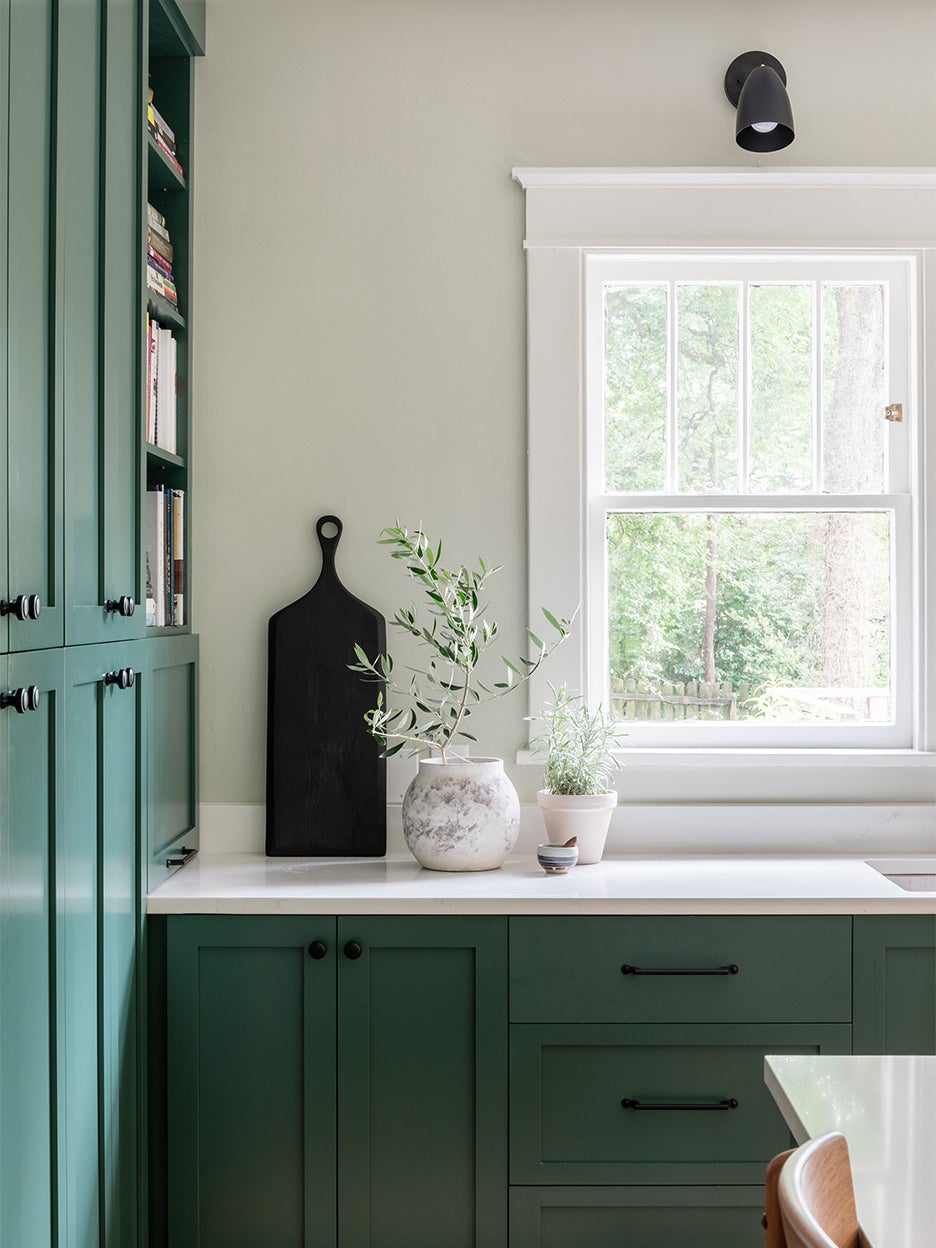 The stained cork floor from the 1980s was just one of Nashville-based food blogger Amanda Frederickson’s kitchen grievances. The more pressing problem was the lack of countertop space. For someone who writes cookbooks for a living, 2 feet of prep area doesn’t quite cut it. “It definitely needed a renovation, but that’s what I was looking for,” she says of the 1920s home. “I could create something.” As a temporary solution, she bought a small stock island with drawers, but after around nine months of living with the kitchen as is, she called in local designer Lauren Bradshaw to reimagine the room. She needed to get to work on her latest book, Simple Beautiful Food.

Bradshaw gave Frederickson two options: Keep the kitchen where it is or move things around by breaking into the adjacent dining room, effectively doubling the square footage from 165 feet to 330 feet. Frederickson opted for the latter, though that meant closing up a door to the hallway. “I would rather have a big, open kitchen where everyone can gather than two spaces to eat in,”  says Frederickson. The crew got the majority of the work done in a mere three weeks (luckily Frederickson’s basement has tall ceilings, and all the pipes were easily accessible under the floor joists). During that brief time, Frederickson and her then 8-month-old moved in with her parents. “I hadn’t done that since high school,” she recalls. “It was so fun.” Ahead, the pro cook and her designer give us a sneak peek behind the speedy remodel.

Get to Know Your Engineered Surfaces

Today the first thing you see when you walk through the home’s front door is the massive waterfall island. “We considered all the aspects to make sure it wouldn’t feel crazy long, while still spanning into what was the original kitchen,” says Bradshaw. The surface looks like marble, but it’s actually Silestone’s Eternal Calacatta, a combination of quartz and other materials that is more durable (read: childproof) than natural stone. “Over the course of 10 days, I shot more than 100 recipes,” says Frederickson. “We wore it in, and it still looks brand-new.”

When Frederickson and her husband first arrived in Tennessee from California three years ago, it was May and plant life was blooming. “It was so green and lush,” she says. “Everything was alive.” She aimed to re-create that same feeling year-round by going with a dark forest green called Crisp Romaine by Benjamin Moore for the semi-custom cabinets. Rather than cover the rest of the room in a bright shade of white, she went with Mizzle by Farrow & Ball, a green-gray with cool blue undertones.

Bradshaw was extra-meticulous when it came to the hood design. “I knew I wanted to incorporate some natural white oak wood, given we would have a lot of green and quartz going on,” says the designer. She tasked Vintage Millworks with making custom reeded boards that wrap around the Zephyr hood.

As the carpenter was constructing the banquette (an area that functions as Frederickson’s home office these days), they realized they had enough wood left over to continue the hood detailing around the base of the bench. The light fixture over the Modholic table was a $60 score from Leanne Ford’s first home collection for Target (now sold out), while the stain-resistant cushion made out of Perennials fabric designed by Porter Teleo was a no-brainer splurge.

Carve Out Hiding Spots for Appliances, Oils, and More

The tiny built-in niche in the wall by the range is a handy spot to keep salts and olive oils—oh, and toys. “Honestly, it’s a place where I hide things from my toddler,” says Frederickson, laughing. In the far corner of the room by the window there’s a small appliance garage that she’s turned into a coffee station. Next to that: extra-tall pantry cabinets that accentuate the height of the ceilings and offer a ton of usable storage. “I don’t feel like I need a walk-in pantry anymore,” she says.

Frederickson’s only regret is not designating a cupboard to hold recycling. “It seems so silly, but the bin in the corner now drives me crazy,” she says. Keeping the original sink in front of the window was by far her best decision. “I love being able to look out into the backyard while I’m doing dishes,” says Frederickson. There’s no such thing as a bad view in this kitchen, no matter which way you turn.