In True NYC Style, Our $24K Kitchen Reno Had to Account for Integrated Laundry

Maximizing counter space was another priority. 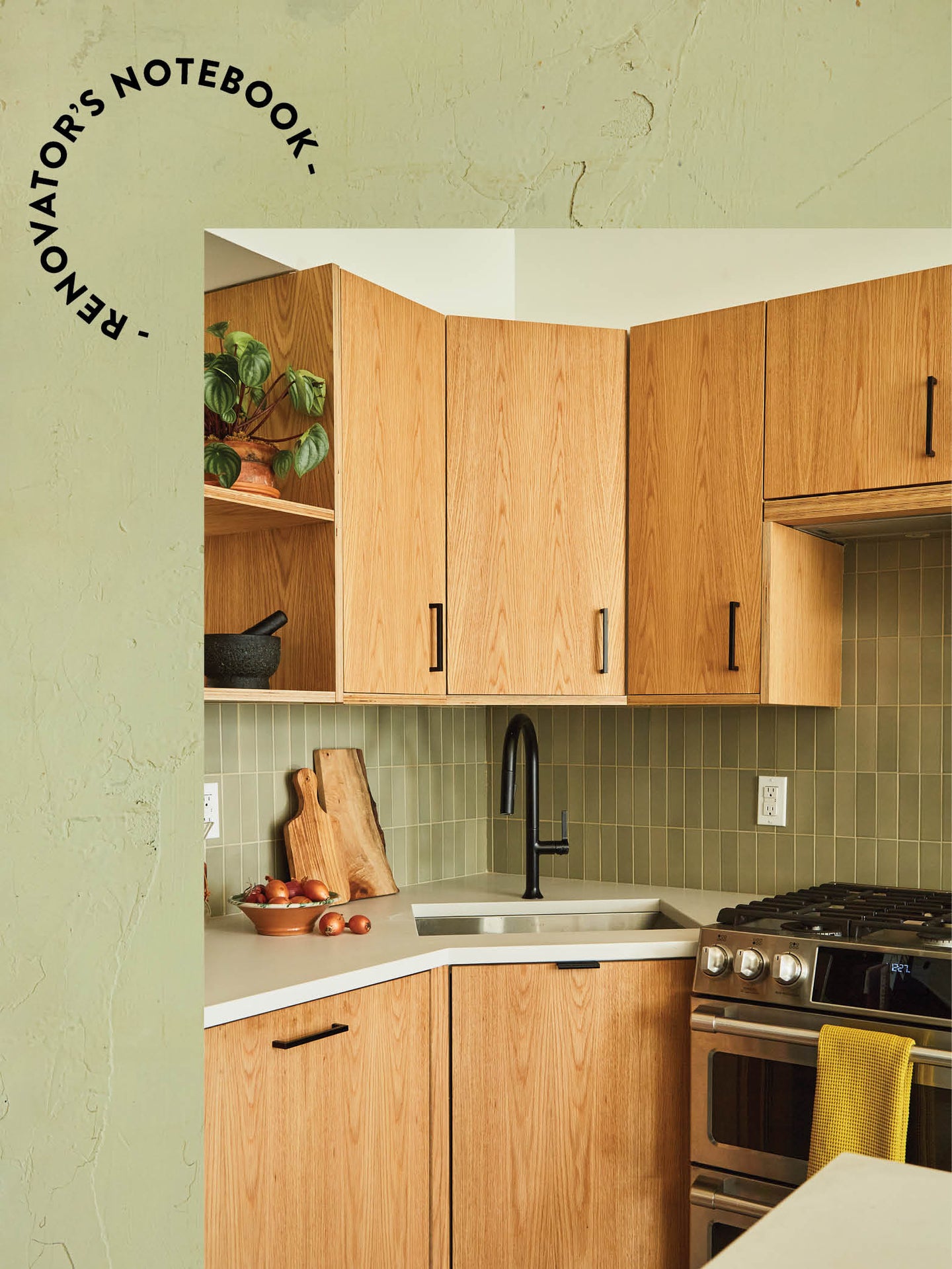 When Jeremiah Corley, the social media manager for sexual wellness company Maude, and Anthony Espino, the owner of digital marketing agency Miki, bought their first home together in Boerum Hill, Brooklyn, last year, they agreed their dated ’80s-era kitchen wasn’t super-functional—but it wasn’t entirely unlivable either. So they decided to sit with it…at least for a year, “even though I never really knew what temperature the oven was at,” recalls Corley, the bigger baker and cook between the two. “It was so old that when you turned it to 350 degrees, you couldn’t be sure it wasn’t actually 500 or 200. There was a lot of repeated checking.” And don’t even ask about the burners. “If you set one on low, but didn’t do it extremely slowly, all of them would turn off,” Espino chimes in.

Over the course of a year, the couple dreamed up all the ways they wanted to put their own stamp on the room. Their plan was to create as much counter space and storage as possible, while moving as little plumbing and electrical to keep costs low. Sounds simple, right? “It wasn’t until we started to see the details of how things were connected that we realized the previous owner had cut a lot of corners,” shares Espino. The tubes that powered the washing machine (in classic NYC-living style, the laundry is located in the kitchen) were wired through the cabinets, which was a code no-no. Plus the floor tiles were set without any buffer on the subfloor, causing them to crack. “Our second problem was the massive delays due to supply chain issues,” he says.

All of the pair’s orders for appliances and materials varied and ended up adding about four months of wait time before they could begin the real work. Luckily their contractor had a warehouse nearby and let them store everything with him at no extra cost. When it was all said and done, the project took approximately seven weeks (not the quoted three to four) and cost them $24,000.

Ahead, in their own words, Corley and Espino take us behind the scenes of their kitchen renovation.

Espino: A big money saver was to opt for all IKEA cabinets. I desperately wanted oakwood fronts (which the company doesn’t carry), so I searched everywhere and found Plykea, a brand that sells oak-ply cabinet fronts (among other styles) just for IKEA cabinets. We used the wood for half the kitchen and recycled black Kungsbacka fronts from the Swedish retailer for the rest.

Corley: The oak nicely offsets the coldness of the black and makes it an inviting and warm space.

Splurge: Tiles With a Handmade Touch

Espino: Our biggest splurge was the Heath backsplash and the CIOT floor tiles. Having done my own ceramics for the past two years, I knew I needed handmade tiles and wanted the beautiful variation that comes along with them.

Corley: I was the only one who didn’t love the idea of continuing the tiles up the wall and around the fridge (I thought it would make the kitchen look too much like a bathroom). When the installer was here and he was working his way toward the new open shelves, we ended up calling it, thankfully. Now we have some leftover pieces we’re hoping will come in handy for another project.

Espina: We had to make a lot of concessions due to crazy product delays. For instance, our current island now features these janky Amazon pulls, but we needed something (the ones we originally wanted were back-ordered for two months so we canceled them).

Corley: And at that point we had been using plastic wrap to open up the drawers.

Espino: Because these Amazon ones are simple and cheap, we know we can always upgrade them down the road.

Corley: It made no sense that the old washer and dryer weren’t stacked when we moved in (but again, nothing had really changed in the apartment since the 1980s). To get by, we used to put cutting boards on top of the laundry machines or bowls of food and magazines…it was too quirky.

Espino: By stacking our new washer and dryer (and moving the fridge), we managed to create a ton of counter space. We had to pay more for a new washer with a reversible door, that way it wouldn’t be opening into the wall. FYI: There aren’t many stacked models to choose from with reversible doors, so we were forced into a more expensive option right off the bat.

Corley: It literally looks like a spaceship (in a good way). But it’s also intimidating, like it could crush you if it fell over.

Espino: Neither of us really had any idea what we were getting into. I never envisioned myself being someone who had a Consumer Reports membership, but I did for a month—that’s how I hunted down our new Cafe oven.

Corley: It has two different doors (the bottom is convection and has capabilities for air frying; the top is best for baking and can be utilized as a warming drawer). It’s really efficient and accurate in terms of temperature—it can even connect to an app on your phone and notify you when it’s preheated. I’ve been able to branch out to new recipes because of it.

Espino: Cladding our refrigerator in wood paneling was one of those gut decisions. I didn’t like the fridge being exposed; it felt like there needed to be a completion, an ending point. Plus, the box ended up adding an extra spot up top to store things.

Corley: When Anthony’s family visited for Thanksgiving, the space felt really comfortable and communal, but there was also room to breathe and move around. We very much designed the layout to accommodate multiple cooks.