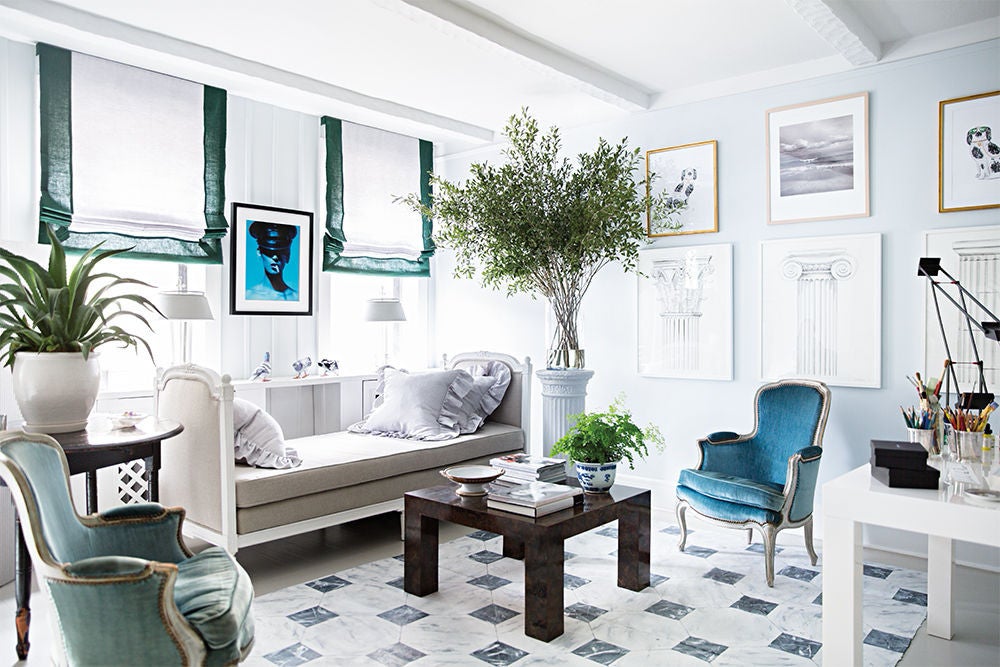 Two years ago, when artist Hayley Sarno moved into an apartment on Manhattan’s Upper East Side, she knew exactly what the space called for, decoratively speaking. With its unspoiled 1920s architecture, the one-bedroom abode still possessed original trellis detailing and exposed rustic beams, lending it an almost pastoral air. To emphasize this quality, Sarno imagined soft pastel walls, painted floors, and a few judiciously selected floral prints. She never found the time, however, to set her plans in motion. Enter her best friend, interior designer

, to whom Farrow & Ball generously offered paint and wallpaper to assist with the apartment’s redecoration. After a session with Erica Silberman, one of the company’s expert color consultants, Mele and Sarno settled on a Gustavian-inspired palette of grays and blues, accented by vivid oranges, pinks, and greens.

Petra by The Row barneys.com

“The Beach” by Tim Carter

Using Farrow & Ball colors exclusively, the pair painted the once-beige living and dining areas an ethereal blue and coated the worn pine floors with a soft stone gray. Throughout the rest of the home, Sarno was fearless. Following Silberman’s advice, she chose a brave pumpkin orange for the kitchen and a mint damask wallpaper for the bedroom. Taken together, the color scheme produces a delightfully old-world ambience. “I wanted to stick with the somewhat rural color scheme, the light blues and grays, in the main room since they make such a great canvas,” says Sarno. “But I also wanted to have a little more fun in the kitchen and bedroom.”

In the living room, a floor painted in Farrow & Ball’s Purbeck Stone and a canvas floorcloth—created by Sarno’s mother, Nancy Lee Carter—provide an artful (and price-effective) alternative to installing new flooring.

Next, Sarno and Mele scavenged through New York and Connecticut for a selection of furniture that exuded comfort and glamour. In addition to a 19th-century French daybed, they discovered a pair of blue velvet bergères and an ornate vintage mirror. To balance the standout antique silhouettes of these pieces, the duo utilized unexpected art and textiles. Set against silk ruffles, floral upholstery, and animal-print bedding are Sarno’s own stylish creations, including her illustrations of pineapples, parrots, and Staffordshire dogs. There are also works by her mother, the painter Nancy Lee Carter, and uncle, the fashion photographer Tim Carter. “Hayley and I both wanted to infuse elements that we haven’t seen in many of our contemporaries’ homes,” explains Mele. “The apartment’s decor makes a nod toward the best of the past, while still striking a modern chord.”

Old-school chairs contribute a classic touch to the dining area.

Sarno’s illustrations (available for sale on domino.com) grace the walls of her bedroom.

(on headboard) Paradise in original on oyster, bennisonfabrics.com