A Boston Condo Gets a Modern, Yet Traditional Makeover

This before-and-after blows us away. 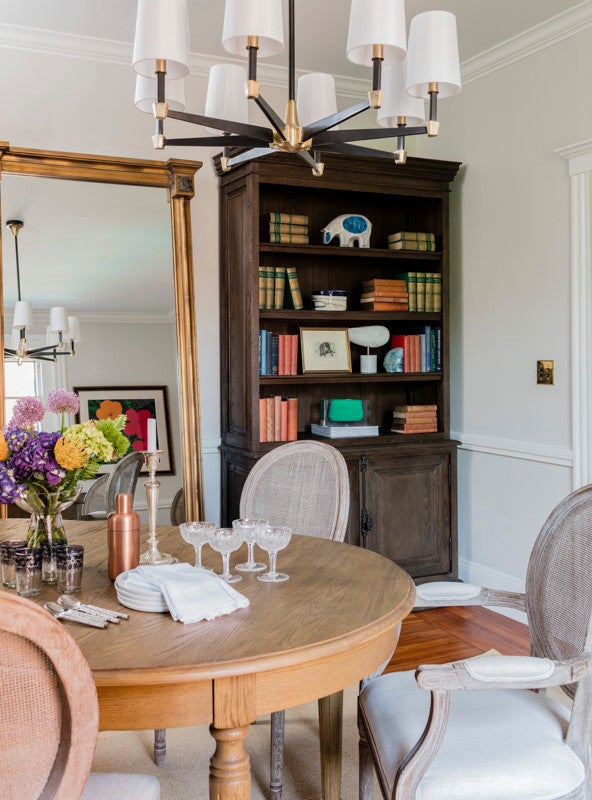 Save for a haphazard kitchen renovation in the 1990s, this just under 1,200-square-foot home hadn’t seen any aesthetic improvements since the ‘60s. Grasscloth wall coverings had been painted over in garish hues, and there were awkwardly shaped closets haphazardly installed for extra storage. “There were two bathrooms—a half and a full bath—located side-by-side off the main hallway,” says Ariel Roth, an interior designer with Helios Design Group, a firm that specializes in both architecture and interior design. “It was very awkward.”

Yet, the location of the 1870 building is ideal— it’s located in Boston’s cobbled Beacon Hill. The unit has good bones, and is embellished with original architectural details, including a thick trim, a carved fireplace surround, and generous bowed windows. With a little insight and unique flair, the homeowner—Henry Peers, a British graduate student—felt the home would shine, and so did the firm he tapped. They worked to make modifications to the floor plan and collaborate on a new interior design scheme.

“The home felt very dark. Rooms were closed off from one another,” says Roth. To establish more cohesion, the opening between the dining room and kitchen was considerably expanded. “By joining the two spaces, they now function as one,” Roth explains. A walnut-topped peninsula offers a spot to eat in the kitchen, while also serving as a buffet for the dining room when Peers entertains.

To compensate for the storage lost when an odd band of closets was removed from the dining room, the kitchen cabinets now reach the ceiling. The refrigerator was also relocated, in order to allow for a new floor-to-ceiling pantry. Roth explains, “We used the maximum amount of volume that we could to ensure we’d have as much storage as possible.”

The upper cabinets are painted a clean, fresh white, while the lower ones are painted Benjamin Moore Hale Navy.  “I didn’t want to do another white kitchen. Since Henry is young, I thought it should have a sense of fun, with a touch of masculinity,” says Roth. “The navy blue and white with brass accents is very Beacon Hill.” Throughout the home, traditionally styled furnishings and antiques pay homage to the structure’s origins, while more modern elements anchor the place in the present.

Art is also a prime component of the aesthetic. “My parents like to collect post-impressionist art back in England, where they have lots of 17th to 19th-century family portraits, as well as other antiquities. So, there’s always been an emphasis on exploring art and discovering artists,” says Peers. For his own haven, Peers was inclined toward pieces of a more modern persuasion—for example, in the dining room, he hung a piece from Andy Warhol’s 1964 flower series. “For a dining room, the flowers are easy on the eye and give a contemporary feel to the room,” he says.

Unlacquered brass push button switch plates adorn the rooms, which is an interesting touch.  “They are a nice traditional detail, instead of a typical toggle switch,” says Roth. Space was also taken from one of the bedroom closets to convert the original half bath into a full bathroom, which now connects to the master bedroom to create an en suite. “Even though it’s small, we wanted to make it feel quite luxurious,” says Roth. “It was meant to be a serene, traditional space. We achieved that by using Carrara marble subway on the walls, and a Carrara herringbone mosaic on the floor.”

The larger hallway bathroom therefore became a showcase. Phillip Jeffries vinyl grasscloth sheaths the walls, and the floors are made of a striking Ann Sacks Kelly Wearstler mosaic tile. A Statuario marble slab covers the shower walls, and the vanity was custom-designed and painted a dark green to complement the green tile floor. An Andy Warhol print of Queen Elizabeth pays homage to Peers’ native England, as does the Mario Testino print of Kate Moss.

In the small study, the window seat was repaired, while a plush cushion was made out of an emerald green silk velvet fabric by Schumacher. A key feature of the home is also the fact that each room has a different wall color, which works to give a distinct feel to all of the rooms in the small home. This expands to even the front entry hall, where the lower half is painted in Farrow & Ball Manor House Grey, while the portion above the chair rail is sheathed with a patterned, green-and-cream-toned wallpaper. “I was worried it would appear too dark, but I trusted my instinct, and it looks beautiful,” says Roth.

Before & After: A Dated Carriage House Gets A Modern Makeover A Budget Renovation in Black and White Two Brooklyn Apartments Become One in This Gorgeous Renovation