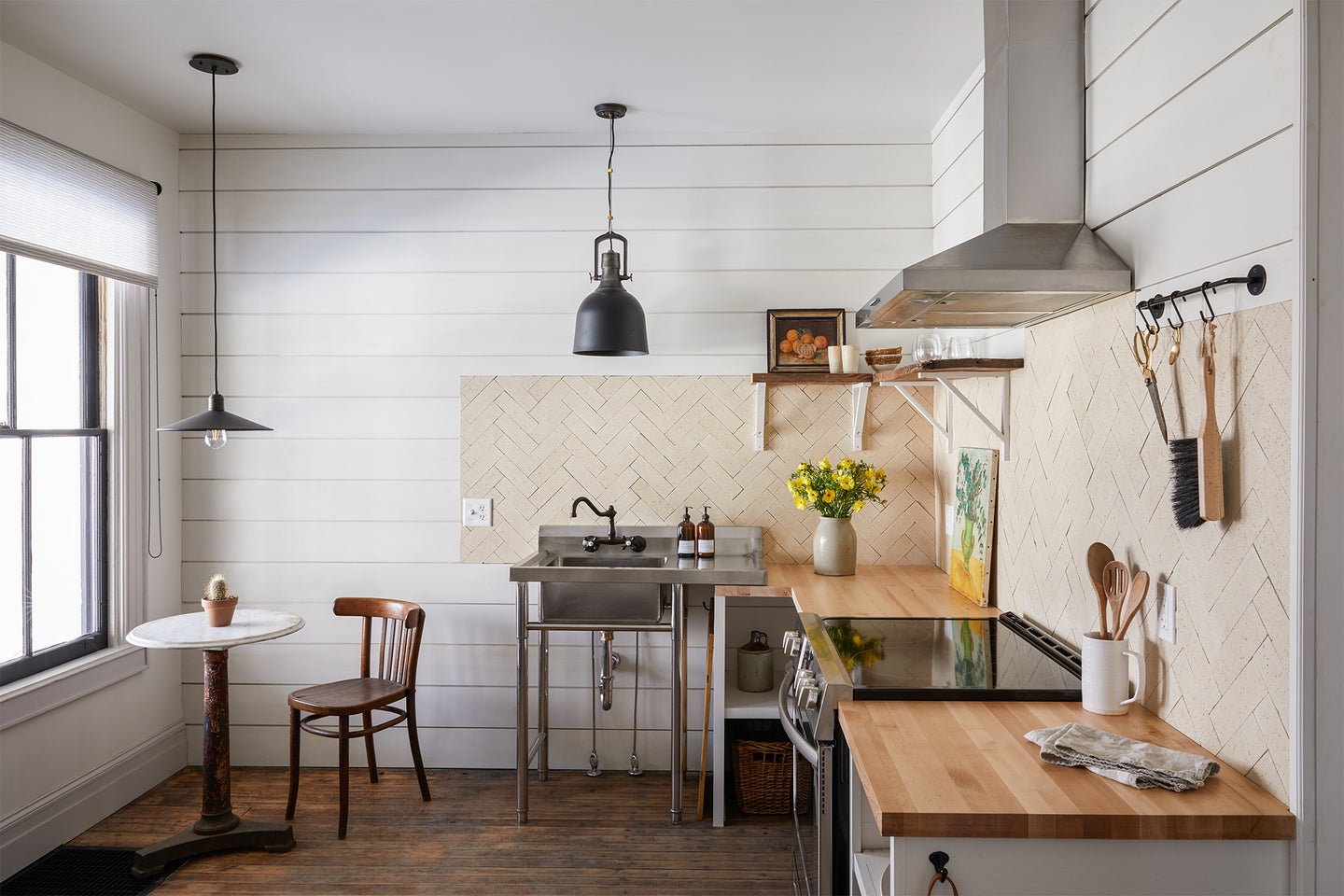 With our New Year’s resolutions freshly penned, January at Domino is all about change—the demo and construction kind. Welcome to Renovation Month, in which we pull back the curtain on the highs (mood-boarding!) and lows (finessing the budget—again) that come with creating the home you’ve always wanted, whether that involves a top-to-bottom remodel or a rental kitchen facelift. Sign up for our newsletter so you don’t miss a thing. In this four-part series, Zio & Sons’s Anthony D’Argenzio walks us through what it really takes to completely restore an old home from top to bottom.

You’ve hired the contractors and outlined your budget. The mood board is hanging prominently in your office and the nitty-gritty of demo has been taken care of. It’s time to actually start putting the home together, and while every room is important, no two pose as many technical difficulties as the kitchen and bathroom.

Thankfully, we know a guy. Zio & Sons’s Anthony D’Argenzio has been through it all while renovating a historic 1915-era home in Hudson, New York. So as part of our monthlong series chronicling the process, we asked him to shed some light on how he tackled those two tricky areas.

The result? Industrial and chic spaces that walk the line between high design and function. He did this by saving some original details, like the wood flooring in the kitchen, and incorporating a few unexpected ones; for example, a Rejuvenation bucket sink that typically belongs in a laundry room but adds bold flair in the bathroom.

One thing to note before you get started on renovating your kitchen or bathroom: “Making over those rooms is an investment, so make sure you’re ready to take that on,” he cautions—but armed with the proper knowledge and a few budget-friendly tricks, it’s one you can definitely manage. Here’s how he got it done.

The bathrooms may look bright and airy now, but when D’Argenzio got started, they definitely were not. Each one was cramped, dark, and had only one window each, so he did a little structural rejiggering. He took down the old shower stalls and replaced them with tubs from another apartment he was renovating so they didn’t go to waste. Then he blew out the adjacent kitchen walls to expand the space a little. “Think about the feng shui,” he says. And sometimes that involves knocking down a wall or two.

“Making over those rooms is an investment, so make sure you’re ready to take that on.”
advertisement

When dreaming up the now-smaller kitchen blueprints, he had one rule: “Think in terms of a triangle.” For example, the kitchen. Not only does that make for a more functional cooking experience (all your pots and pans will be within arm’s reach of the stove), but it also creates blank space on the opposite wall, further opening up the room.

Get Acquainted With Your Tiles’ Needs

The bathrooms feature a true mélange of tilework: There’s Carrara marble, black cement, shimmery zellige, and even a simple white square tile. In order to correctly care for each of them, D’Argenzio studied up. “If you’re using cement tiles, properly seal them—especially if it’s for a rental,” he cautions. “They don’t wear very well unless you do.” By contrast, zellige is pretty low-maintenance.

Make the Most of That Prime Membership

See that industrial sink in the kitchen? It was a $300 Amazon score. D’Argenzio went looking for a stainless steel option with a drain board and scrolled through the thousands of options until he found the right one. “Once I had the size down, I sorted by highest rated and looked to see which was my favorite within my price range,” he says. Don’t discount the online retailer—it literally has everything.

“From the very beginning, we had a set of materials and color profiles I wanted to use,” explains D’Argenzio. He gravitated toward a cooler palette—think: whites, blacks, and pops of stainless steel or iron. Sticking to those colors gave him the freedom to experiment with texture, and you need only look at the shiplap-herringbone tile combo in the kitchen to deduce that he became a real master of layering.

“Think about the feng shui.”

Splash Out on Little Luxuries

Usually designer furniture makes the biggest dent in a budget—but here D’Argenzio says he went all out on the little things, such as the lighting in the kitchen, which he sourced from Hudson Valley Lighting and Troy. “It’s like jewelry,” says D’Argenzio.

Another splurge he’s proud of? The washer-and-dryer unit. It might seem like an obvious amenity, but as anyone who has suffered through a tiny walk-up rental apartment in a big city can attest, having your own laundry machines makes a huge difference. D’Argenzio’s renters agree.

Turn to Vintage for More Than Just Decor

You can get major deals on reclaimed materials like wood. D’Argenzio did just that for the open shelving, which offset the cost of the custom kitchen cabinetry. Then he paired it with jazzy new brackets, which he painted for extra contrast, and the whole thing looks totally bespoke. “It makes a big impact and appears expensive, but in reality, it’s not,” he adds. We’re here for those kinds of sneaky upgrades.