How one designer avoided going too theme-y. 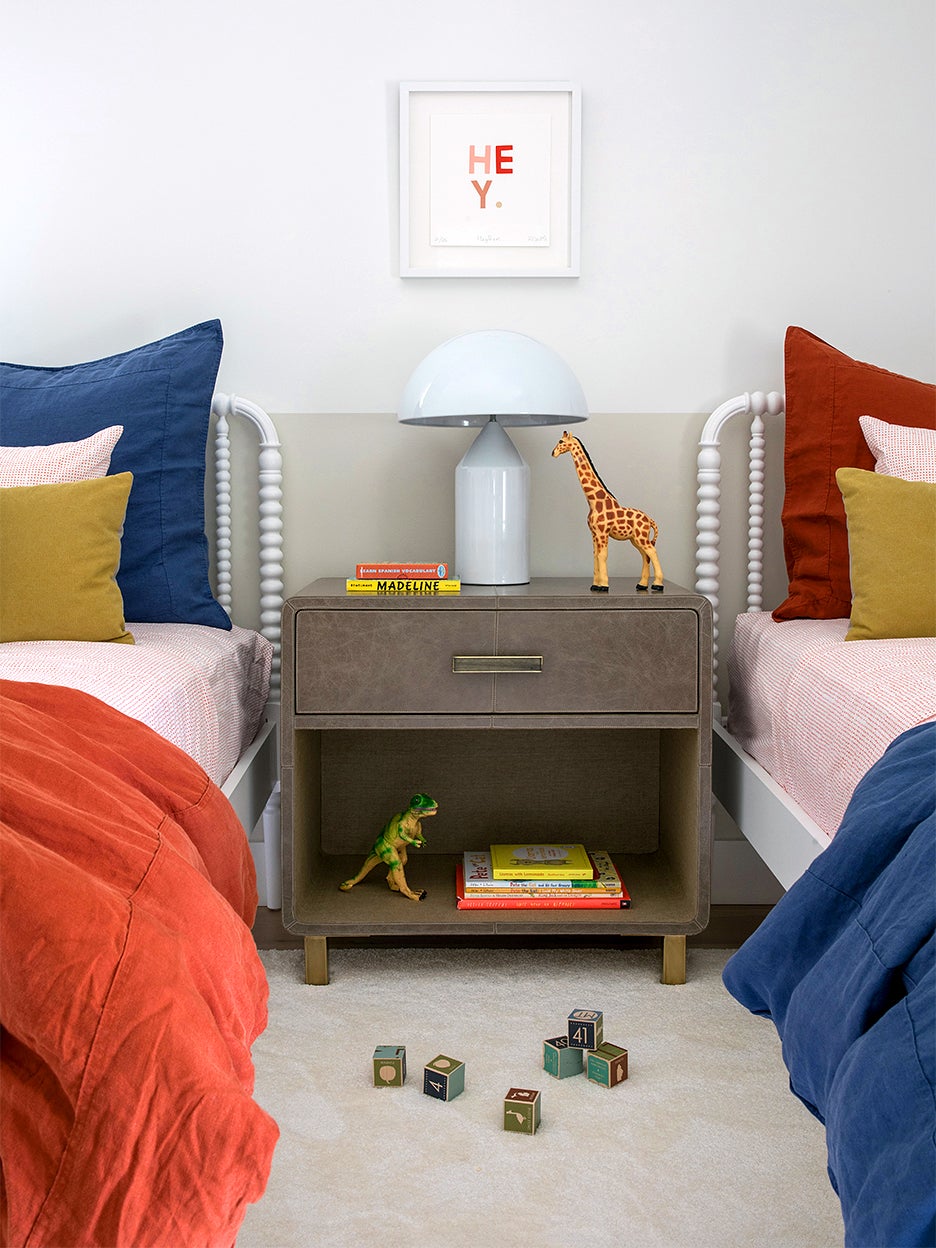 Designer Kelli Suozzo of Bowerbird Co. says her 6-year-old client in the coastal suburbs of New Jersey had some very specific requests for her bedroom: Spider-Man, skateboarding, and basketball. When you peek into the finished color-blocked space, however, there’s a curvy Blu Dot desk chair, a leather nightstand, and colorful geometric curtains—but not a superhero or Spalding in sight. On the other hand, her 9-year-old sister asked for a “pretty but not too girly” room influenced by their family trips to the Bahamas. (A picture of baby goats wearing sunglasses, clearly in vacation mode, appeared on her inspo board.) An avid bookworm, she also wanted a cozy reading chair and a nook for writing in her journal.

Instead of leaning too hard into either girl’s suggestions, Suozzo took a more creative approach (aka the parents put the kibosh on a web-slinging theme). “When I do kids’ rooms, I really try to keep it elevated so it’s something that they can grow with,” says the designer. Bedding can be easily swapped, she explains, but furniture and window treatments should be chosen with longevity in mind. Here’s how Suozzo took the sisters’ preferences and turned them into bedrooms they’ll both love for years to come.

Leave Some Things Up for Interpretation

Instead of filling the walls with literal Marvel characters or Michael Jordan insignia, Suozzo surveyed her tiniest client for more details. “I asked her, ‘What do you like about Spider-Man?’ and she said, ‘Well, he’s red and blue, and I love red and blue,’” says the designer. From there, Suozzo upgraded the primary palette to a sophisticated rust and navy (shown on linen Schoolhouse bedding). The dot pattern on her Caroline Z. Hurley for Shumacher curtains bring a sporty vibe—they almost look like multicolored basketballs.

Give Them Visual Cues

“With kids, I find that pictures are really helpful,” advises Suozzo, so she presented both girls (and their parents) with mood boards for approval. There were a few minor tweaks, but she says she makes the boards mostly to drum up enthusiasm from the little ones. For instance, the older sister couldn’t wait to get to work at her floating desk nook. “All in all, they were just excited to see it coming together,” she notes.

In their previous house the girls had shared a room, so this would be the first time they’d be split up. To make the transition easier, each got to choose one thing from their old room to bring over to their new space. The older sister chose the Temple Studio curtains, which was a good fit with the island-y cane on her Anthropologie bed and a copper Tom Dixon pendant lamp. And the younger one kept the two Jenny Lind twin beds—for jumping back and forth like Spidey, obviously.