This Little Girl’s Bedroom Reading Nook Is So Cool, We Want One, Too 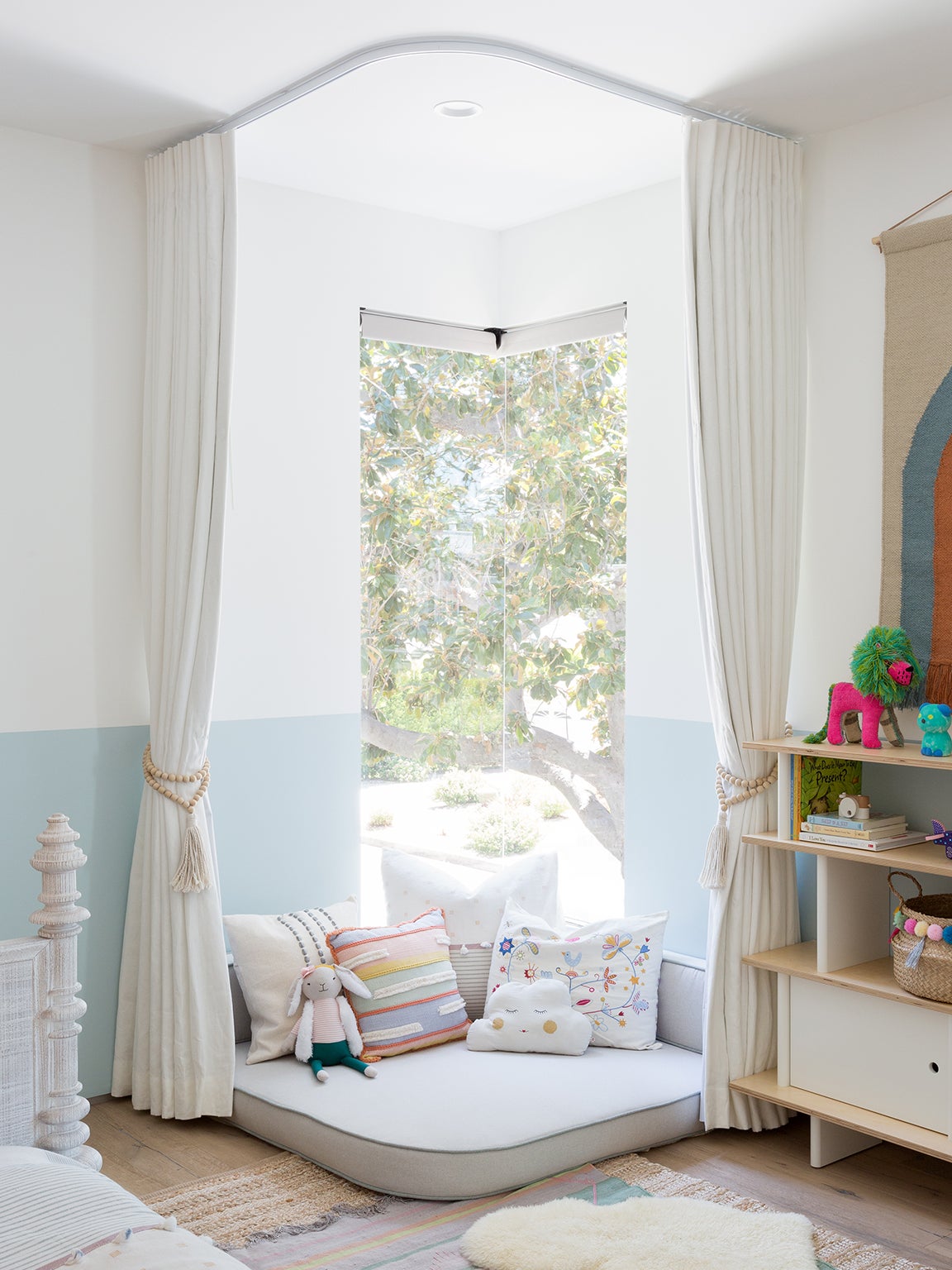 For 4-year-old Anahì, the corner window in her future bedroom was an obvious home for her dolls. “She naturally gravitated there for playtime,” remembers her mother, Angela Aguirre, of the first walk-through of their newly constructed house in Studio City, California. She and her husband, Eric, knew right then and there that they had to make the sunny spot extra cozy for her.

In the first few months after they moved in, the couple filled the area with a pile of pillows to create a makeshift story-time nook—Angela, a leadership coach for women, hoped that the space would promote reading and nourish her daughter’s senses—but they quickly realized that wasn’t going to cut it long-term. Besides, the sun was streaming in from all angles in the morning, waking Anahì up extra early; the sleep-deprived parents needed a solution to both issues, pronto.

With Anahì ready to transition to a toddler bed, they decided it was time to call on interior designer Irene Lovett of Designstiles, who took their first try at decorating and ran with it to create a dreamy play space for a 4-year-old to learn and grow in.

When Lovett came on board, the room was still pretty bare, with little more than a crib and a few toys, but everyone immediately saw the potential. “It had so much charm because of the natural light that floods in and the mature magnolia trees that can be seen from the windows,” says Angela. It only made sense to design the space around the views. To take advantage of that windowed niche, the designer had a floor cushion made, then hung curtains following the curve of the upholstery.

All these custom pieces were a bit of a splurge, so the designer finished off the space with affordable pillows from Target, Anthropologie, HomeGoods, and IKEA to get the budget back on track. “It didn’t make sense to spend so much on designer accessories for the area where Anahì and her friends would potentially play the most,” says Lovett.

Rather than oversaturate the room with a bold hue, Lovett chose to keep the focus on the sights, painting just the lower half of the walls in Dunn Edwards Shark, a soft, soothing tone somewhere between turquoise and mint. “I wanted a color she can grow with,” explains the designer. “It needed to be muted enough to feel youthful but not juvenile.”

The other decor choices came naturally, inspired by a purple flat-weave rug the couple brought back from a trip to Morocco. “We’ve traveled to more than 45 countries and hope to inspire our daughter with the same love for travel,” says Angela. So they hung a commissioned piece by artist Jessica Ando depicting Mt. Kilimanjaro above Anahì’s bed and collected books and playthings from all around the world to fill the shelves. However, if there is one spot that fuels a child’s sense of adventure, it has to be that breezy, kid-size hideaway.