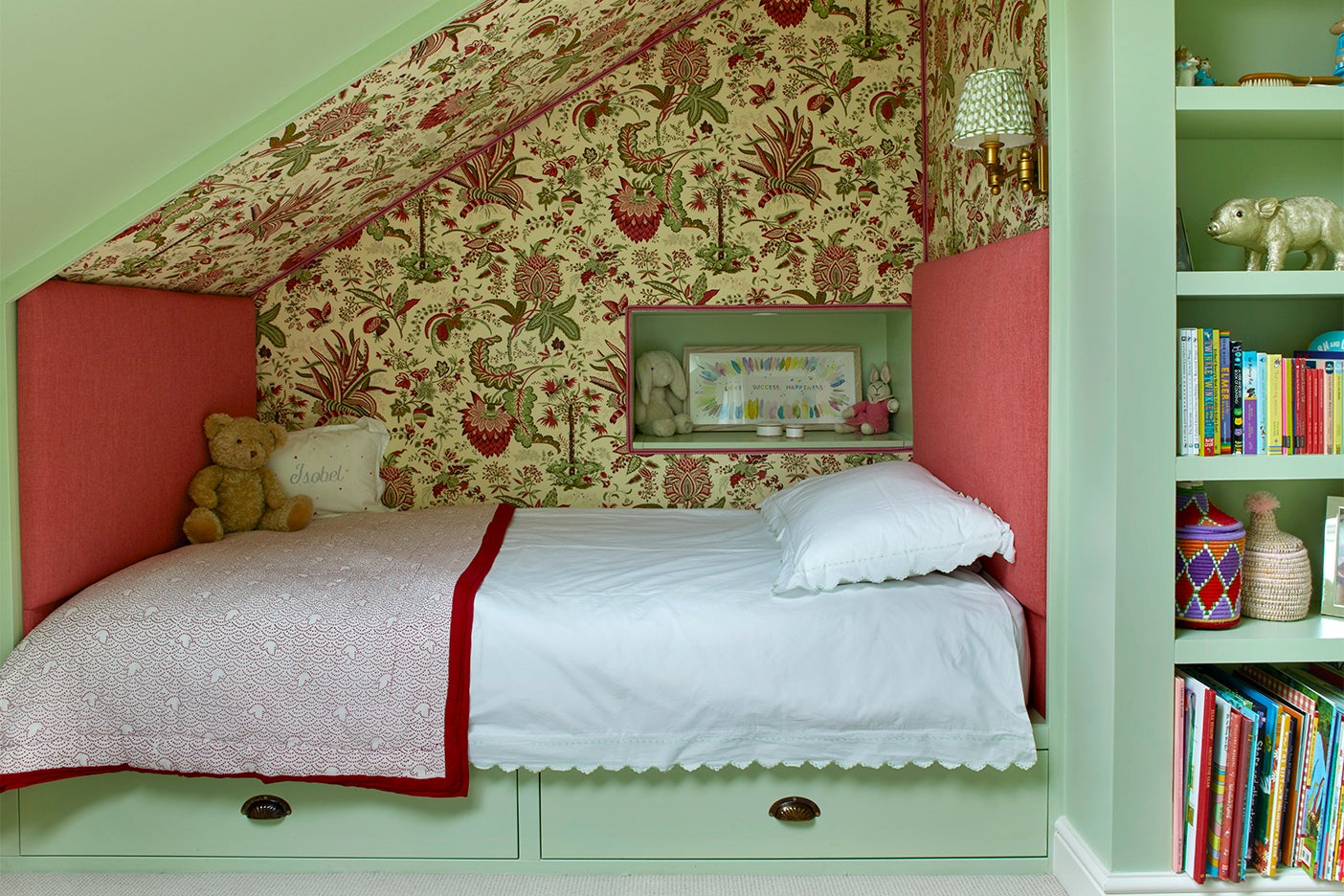 Photography by Astrid Templier; Design by Taylor and Turner

If it wasn’t for the promise of a top-to-bottom gut reno, Harriette Cayzer would have never moved into the London bachelor pad her husband and his brother purchased when they were young and single. In fact, when he brought up the idea a few years after the couple had moved into another place nearby, the interior designer flatly refused. “It had a huge overgrown garden and furniture muddled together,” she remembers.

The family already had a daughter, Isobel, now 3, and Cayzer, who co-founded the firm Taylor & Turner, was heavily pregnant with her second child. She needed to make room for her growing family, and fast. Her first order of business: doubling the size of the third-story loft to create a guest suite and bedroom for Isobel. The dark room might still be the smallest in the Victorian home, but now it’s also the most special:

With this level’s heavily slanted roof, a built-in daybed made perfect sense: “I knew it was going to be under the eaves so I wanted to do some type of enclosed nest,” she says of the nook. To make space for a closet in the neighboring guest room, Cayzer had borrowed square footage from Isobel’s room and left just enough for a twin bed. “I hate dead space or voids,” says the designer, who even managed to squeeze in a nightstand niche and a bookcase, which her daughter loves to pore over every night in search of the perfect bedtime story.

To cozy up the sloped bed alcove, Cayzer paneled the walls and ceiling with Pierre Frey’s Fleurs Etranges textile, which she lined with a red Samuel & Sons trim. She softened the area even further with a matching headboard and footer upholstered in Romo’s Ruskin linen in raspberry. The finishing touches: scalloped bedding from Cologne & Cotton and a sconce with a Fermoie pleated shade.

Taking a Chance on Paint

Cayzer painted the rest of the room—ceiling, trim, and all—in a custom pistachio hue from Dulux, which she matched to the floral fabric. “At one point, I worried it was pregnancy brain taking over,” she notes, laughing. But as soon as the Pierre Frey textile was installed, Cayzer knew it was the perfect shade. “During the day it’s bright and breezy, but in the evening it’s very soft,” she says. “It never feels dark; it almost glows at night.”

Using Up Every Square Inch

The second floor, which houses the main bedroom and nursery, sorely lacked storage, so that was Cayzer’s top priority for the extension. Under-bed drawers house out-of-season items, while a closet on the opposite wall (with doors that almost disappear into the monochrome mint scheme) holds Isobel’s clothes. “The hanging rails are on her level, and there are nooks for her precious things,” says the designer, noting that her daughter also loves to hang her dresses on the knobs for all to see.

After the renovation was complete, Cayzer realized the tiny jewel box felt familiar. “My childhood bedroom was also pink and green,” she notes. “I was subconsciously trying to re-create it.”