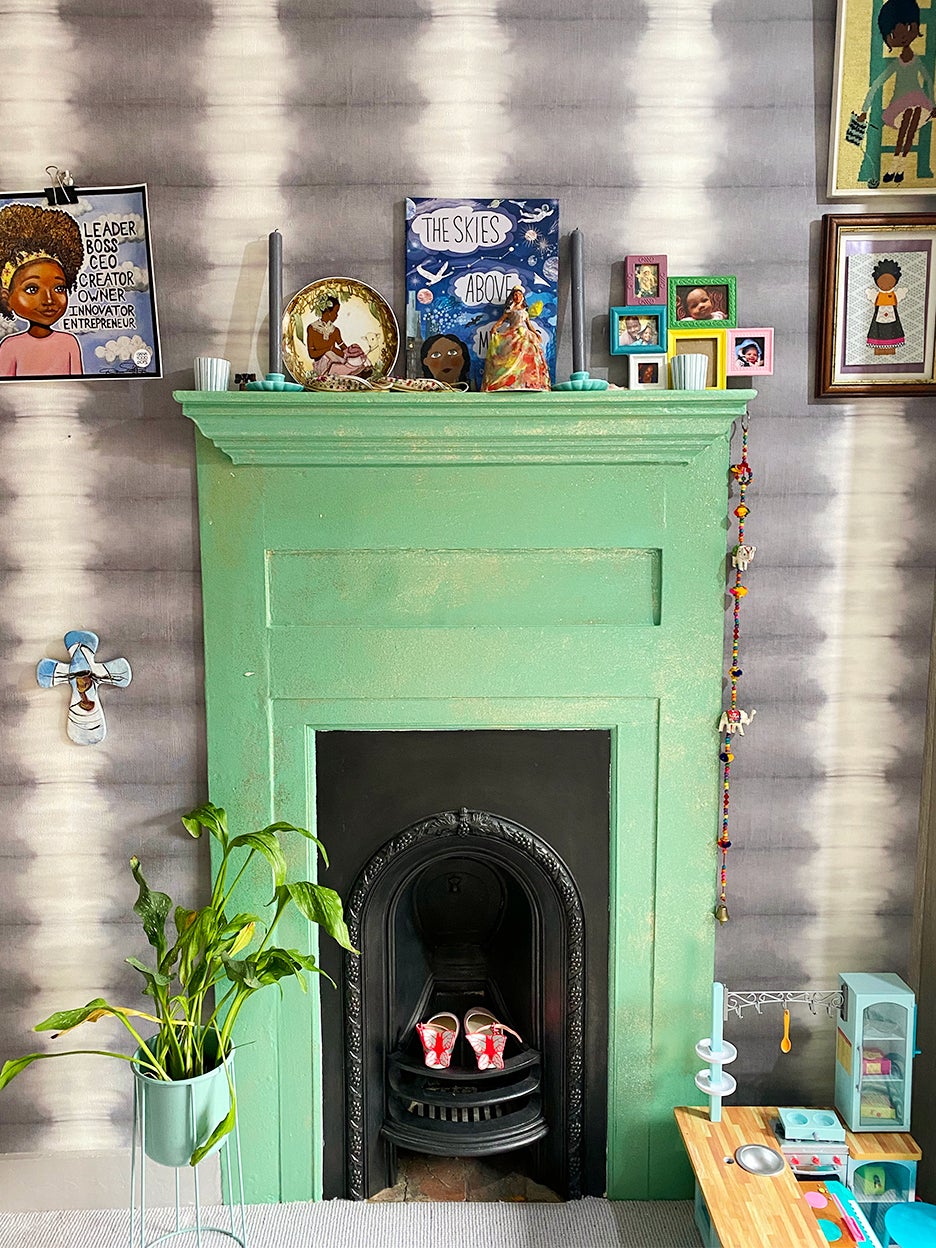 When Kemi Lawson began her home search in the spring of 2019, she mainly focused on location—proximity to her 7- and 8-year-old daughters’ school and the family’s in-laws was of the utmost importance. That is until she stumbled across a 1700s-era cottage in Stanmore, a small wooded area located on the outskirts of London.

The storied house, which was once a bakery, radiated character (Lawson was even given a guest book of sorts, in which previous owners recorded their experiences dating back to the 1800s), and suddenly her priorities changed. “I thought it was just brilliant that we were custodians to a place that had been around forever,” says Lawson. “I saw it as a blank canvas, one that I could use to tell a story about our heritage.”

Half Nigerian and half Jamaican, Lawson explains that raising a Black, British family comes with a set of responsibilities: “I wanted to create a home that celebrates my daughters and reiterates how beautiful and confident they are.” Decorating her house also led to the launch of the Cornrow (and quitting her job in finance), an affordable edit of lifestyle and home accessories tailored to a design approach Lawson refers to as “the modern Black aesthetic.” Here, she shares how she reimagined the space with meaningful personal touches (and a little extra sparkle).

Let Them Have a Say (So You Can Have Your Way)

Lawson let each of her daughters choose their bedroom’s color scheme, hoping to bring them into the design process—“and so I could spearhead the rest myself,” she adds, laughing. Still, she referred back to them with each decor choice she made. “When we moved into this property, I was inspired by stately British homes—they all have these beautiful canopies, and I started thinking about how I could bring that look into my little baker’s cottage. My husband doesn’t necessarily want swishy curtains in our room, but the girls’ rooms? That was where I could really go to town,” says Lawson.

While she was immediately taken with a more-than-200-year-old sleigh-style child’s bed she picked up at an auction, her eldest daughter was less than thrilled and requested a new bed like her younger sister’s. Not wanting the drama, Lawson almost gave in. “But before I did, I thought, let me explain the piece’s history. I described it as a princess bed and told her we were going to put a canopy on it. I asked her to just bear with me.” Her daughter did and ended up loving her vintage bed.

Work With the Quirks

Photography by Chris O’Donnell for The Frugality

Unable to embark on a major renovation, Lawson had to adjust to the property’s eccentricities. “I wanted to highlight the home’s unique quirks while also making them work for our modern family,” she explains. For her younger daughter’s room, “the previous owner had used it as a sewing space, so when I first saw it, I wondered, where are we going to put the bed?!” She considered tucking it under the window, but damp and drafty weather was a major deterrent—and the far wall was the only spot fit for a wardrobe. Then she revisited the cozy alcove. Previously written off as being too small, the nook could work with the help of a built-in bunk (raised to allow for extra storage below), custom mattress, and Princess and the Pea–inspired wallpaper.

Another charming but potentially cumbersome feature: the antique fireplaces that no longer function. Lawson added a splash of pink and green paint to coordinate with the palette in each room, then layered on some glitter, because, as the mom affirms, “you can never have too many sparkles.” In went the girls’ beloved stuffed animals and mini potted plants, creating a personalized vignette that’s authentic to the space.

Make Decor a Tool for Empowerment

The wallpaper in both bedrooms makes a cool statement—and was also a meaningful gesture. Resembling Adire, a traditional African tie-dye–style technique that originated in Nigeria more than 600 years ago, the textural treatment gives the walls extra warmth. “It’s very resonant of our heritage and like a part of our DNA,” Lawson says of the print. “When I put it up, I could feel that energy in the room.” Similarly, each piece that she brought in became a way of forming (and affirming) the girls’ identities. “I want the feeling of recognizing themselves in the art on our walls to be normal,” she explains. “If they’re thinking of a great classical composer, I want them to think of Samuel Coleridge-Taylor as much as Mozart.” as much as Mozart.” The bookshelves are also lined with empowering reading material (“I try to face the book covers outward, especially ones that have positive messages of Black girlhood,” says Lawson)—and pictures and mementos from family and friends are proudly displayed throughout the home. Ultimately, she says, surrounding her daughters with special things was her way to “express my love for them.”