Design | Family First | Home As We Know It | Kids 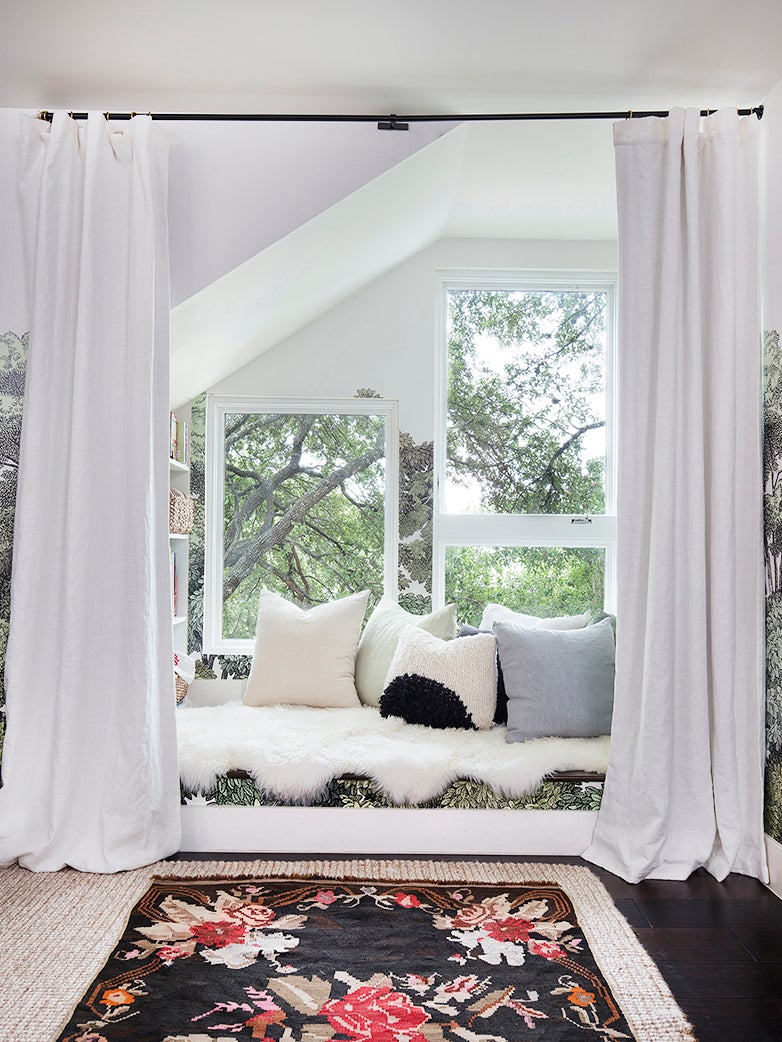 Magical treehouses, daredevil half-pipes, cozy outdoor movie theaters, imagination-filled forts, jungle gym playgrounds… Since the spring, soaking up the outdoors as much as possible has been sanity-saving—and for families, even more so. Nature is now a true sanctuary, and maximizing every patch of grass and sun-filled corner in our own spaces has become invaluable for giving kids an almost-normal life. So with days getting shorter and colder (and schools closing back up in parts of the country), bringing that same feeling of magic inside is a must. How do you give little ones the same sensory experience of living life outdoors when the kitchen island has become a homework station and the playroom doubles as a Zoom classroom? A planetarium, aquarium, or secret garden in their bedroom might just do the trick. And while it may sound far-fetched, some of these transportive ideas are surprisingly easy to pull off and will add a bit of wonder and delight for the whole family (who doesn’t love gazing at a starry “sky” or being surrounded by a canopy of “leaves”?).

Transform your child’s bedroom into an enchanted forest, as fashion creative Deborah Brett did in her London home. With the help of a set designer friend, she turned the sleeping nook into a leafy canopy by bookending the bed with trunks made from rolled polystyrene cylinders draped with hessian sack cloth and dipped in plaster of Paris. A scattering of hand-painted silk leaves transports little ones straight to a woodland landscape. Or take note from artist Nathalie Lété’s Paris showroom and build a nest bed that appears to be tucked into a tree. For a similar look without the DIY, cascade decorative (faux) vines and felt plants around the room—no watering required.

Bring a bright, sunny day indoors no matter the weather by painting a blue, cloud-filled sky on your kids’ walls, as accessories director Maria Dueñas Jacobs did in her West Village apartment—with a bubbly glass pendant lamp to match. Across the pond in North London, lifestyle store owner Kemi Lawson of Cottage Noir had a similar idea for her bedroom (where her two daughters love to hang out), but opted for a color-wash wallpaper from Designer’s Guild. From the ceiling she suspended a cumulus-style pendant light from IKEA. Hang a mobile of feathered friends, cue a soundtrack with birds softly tweeting, and take the space to soaring new heights.

Dreaming of a lush garden in a concrete jungle? Do as Brooklyn Writers’ Collective founder Molly Rosen Guy did in her Williamsburg apartment and reimagine the walls in bright, oversize blooms. Going a step further, she covered a loft-style IKEA bed with matching floral fabric and added curtains on the lower half to play up the secret hideout vibe. For teens, let their imagination go wild with a hand-painted headboard they can create themselves, featuring delicate flowers that creep right up to the ceiling. Artist Lété finished the look in her bedroom with a botanical-motif lamp and dusty pink linen bedding—or a plush rug and colorful critters can round out the free-spirited scene. You can almost smell the gardenias.

Enter a whole other world with a few simple updates. Dale Saylor and Joe Williamson’s young son had one request when it came time to redesign his “grown-up” room: a space theme. The two parents, who are also cofounders of design-build firm Hollymount, obliged with a starry mural painted atop a base coat of Ressource’s Cosmique, a deep blue shade that changes with the light, just like the real thing. Next, they layered in galaxy wallpaper, moon rock pillows, and rocket ship bookshelves. If a paint job isn’t in the cards, a planetarium projector, solar system mobile, or glow-in-the-dark constellation artwork can give little ones something magical to gaze at come nighttime.

If your kids are more interested in the marine world, an underwater theme might be just the thing to get them inspired. That was the case for Hannah Harden, director of global marketing and development for de Gournay, whose son has a fascination for sea turtles. She picked her company’s Fishes wallpaper and covered every surface of the nursery, down to the wardrobe doors, creating a shimmering aquarium effect. Another way to bring in the life aquatic? Rippling water-print upholstery fabric and art that acts as a portal into a seafaring adventure—twinkling octopus included.