Behind These Streamlined Cabinets Is an Entire Hidden Kids’ Zone 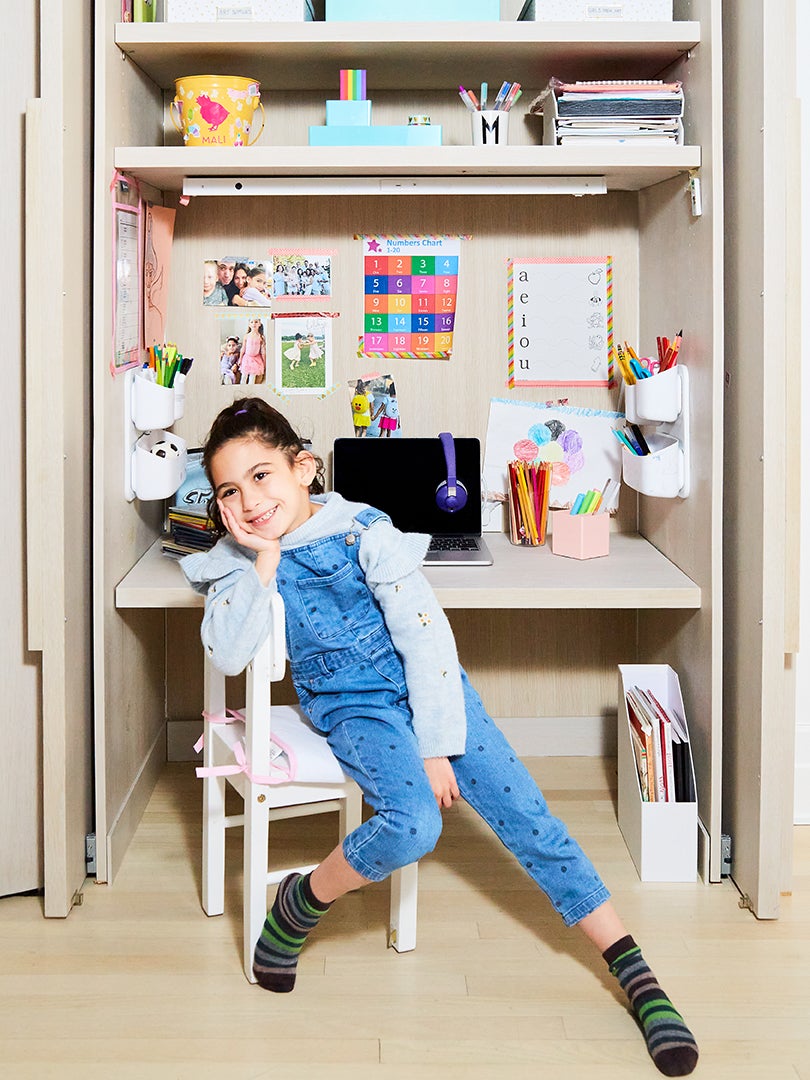 When Tali Magal and her husband, Craig Fleishman, finally purchased their two-bedroom apartment in Brooklyn after renting for 12 years, only one thing was missing. While Magal, a producer and founder of Freebird Productions, knew her 6-year-old twin daughters, Amalia and Gabriela (who go by Mali and Gigi), would share a room (“It’s New York!” she says, laughing), she also hoped to designate a play area for the girls. So she turned to her close friend and designer extraordinaire John Rawlins for guidance and ran her initial plan by him: “Totally trick out the inside of a vintage armoire,” Magal remembers. “My idea was to hang their art supplies and toys on the [interior] walls so they could make a mess and then we could close the doors.”

Rawlins understood her vision—and took it a step further. He pointed out that the two empty walls between the bathroom and laundry room were prime real estate just begging to be transformed. Instead of adding an extra piece of furniture, why not build into the walls, where unused square footage was hiding? They created a super-versatile, Narnia-level cabinet that can be used for everything from make-believe adventures to math homework.

It wasn’t until the girls started Zoom kindergarten last year that Magal and Fleishman realized their creative storage system hadn’t yet reached its full potential. The cabinets quickly took on a new life as a cool homeschooling setup. Read on for the piece’s most noteworthy features and how the girls added their special touch.

To easily toggle between streamlined cabinetry and a fully functioning kids’ zone, Rawlins designed the cabinet doors for smooth transitions (when opened, they can be tucked along the side walls to keep the walkway clear). With Rawlins’s help, Magal chose the same wood for both the cabinet fronts and the doors to the bathroom and laundry room, creating what now appears to be one long cabinet that blends in seamlessly as a backdrop to the living and dining areas. “It’s nice to shut the chaos away at the end of the day, which you wouldn’t get to do in a playroom, as I originally wanted,” Magal notes of being able to instantly change the after-school vibe. “It creates a real sense of separation between work and play.” And during the pandemic that’s been especially important so that the family can unwind.

Let Them Make Their Mark

It wasn’t until the girls began using the space as a daily classroom that Magal realized the design helped them carve out independent work areas, allowing each some autonomy. When the doors are open, they have the sense of being in a learning cocoon (noise-canceling headphones help, too). “You really feel like you’re in your own cubicle,” says Magal, who also took care to let the sisters personalize their stations. “They have a real sense of pride when it comes to their desks.” And each twin channeled her unique style. “They share everything, but this is something that’s all their own. It can teach them about ownership and individuality,” she adds. Magal describes Mali as “liking everything just so,” which shows in her carefully organized wall-mounted storage that holds pencils, pens, and other school supplies “so I can focus,” explains Mali. Gigi, on the other hand, “is a total artist” and has taken time to pin up drawings on the inside of the walls. Her favorite part of her setup? The alphabet above her desk for learning her letters.

The system’s original purpose of housing the kids’ supplies is still in action. Extra shelves top both cabinets, acting as storage units for everything from toys and crafts to miscellaneous household overflow. In fact the desk’s “table” itself is another adjustable shelf, able to grow along with the girls. When Mali and Gigi become too tall for the current setup, they simply have to switch up the height. But in the twins’ eyes, their new desks are already very grown-up. Gigi loves to mute and unmute herself during Zoom school all on her own. “It’s a pretty responsible, big-kid thing to do,” she says. Entering a magical portal that keeps you organized and inspired—and disappears when you don’t need it—sounds like something adults would want, too.